The DCCC, which Maloney chairs, is meant to elect Democrats and help keep incumbents in office, and the group is not allowed to use the funds for personal use due to campaign finance laws. Despite the laws, the committee spent $813, on June 21, 2021, for the Air France tickets, according to documents obtained by the New York Post.

Maloney started posting pictures on his Instagram with his husband Randy Florke in August.

The Post noted that a picture posted from Maloney on social media, with him smiling Florke, on August 10 shows in Nice, France, with the city’s historic lighthouse in the background.

Another photo from his social media shows that two on a beach, with his husband shirtless. One of the top comments on the post reads, “Daddy stop teasing me,” with fire emojis.

The Post claims that a picture from their trip indicates they also attended a wedding for Haley Plourde-Cole, near Villa et Jardins Ephrussi de Rothschild in Saint-Jean-Cap-Ferrat. Plourde-Cole has been a frequent donor to Democrats and Maloney, according to the Federal Election Commission records.

Florke, on August 15, posted a picture of the two at an art studio looking at artwork, writing, “Studio visit. Thank you Sudesh for allowing us a peak at your latest work.”

“Sudesh” later wrote back, “Great to have you and [Maloney] come by for a look at the latest work.”

“Sean and Randy have been close friends since I worked on Sean’s first campaign as a college student in 2006, and as a staffer serving two governors,” Maloney’s frequent donor Plourde-Cole told the Post. “I am honored they were able to join us for our wedding.” 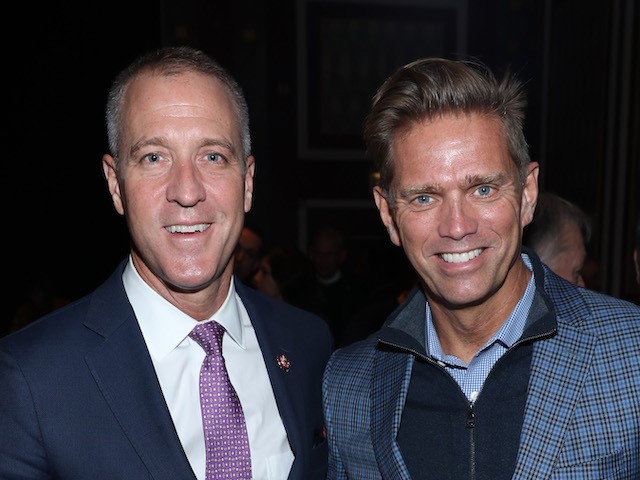 The DCCC declined to give details on what “DCCC business” went on in Europe or who the ticket was for, but a representative for the committee told the Post that the ticket was bought “to conduct DCCC business with Americans living overseas” and did not pay for the chair’s trip.

Former Democrat chairwoman of the FEC, Ann Ravel, allegedly laughed at the DCCC’s explanation and said, “It’s something that should raise red flags.”

“There are expatriates all over the world. They should be flying to San Miguel de Allende in Mexico. There are a ton of expats there,” she added when speaking to the Post. “I just think it would be incumbent on them to perhaps be more transparent about it.”

A staffer that works for an “embattled House moderate” told the Post:

“Buying flights to France seems pretty incongruous with our goals of protecting difficult seats and protecting our majority, especially given the reporting that some battleground members have been threatened with having their DCCC support pulled just for working to get an infrastructure bill passed.”

Maloney, while trying to keep the House majority, has had a rough time in his position facing numerous scandals.