The Democrat-run House of Representatives passed $1 billion in funding for Israel’s defensive Iron Dome system in a face-saving exercise Thursday after Speaker of the House Nancy Pelosi (D-CA) dropped the funding from another bill earlier this week.

Only a minority of Democrats voted against Iron Dome, which also protects the U.S. military; Rep. Alexandria Ocasio-Cortez (D-NY), who led the opposition to Iron Dome, voted “present,” perhaps in deference to Senate ambitions.

But the party had shown its true colors earlier in the week, when Pelosi capitulated to that minority.

The overwhelming vote in Congress to fund the system allows the Democratic Party, and the left-wing parties in Israel’s post-Netanyahu government, to pretend the crisis never happened.

But it did happen, and it happened because the Democratic Party cannot be trusted to support Israel at crucial moments.

Here’s how the crisis played out. Normally, U.S. spending to support Iron Dome would have been passed in the National Defense Appropriations Act (NDAA). But facing dissent within her own party on a continuing resolution to fund the government until December 2022, and to raise the country’s debt limit for the umpteenth time, Pelosi sought to entice Republican support by adding funding for Iron Dome to the resolution, rather than voting on it in a defense package.

(Note that Pelosi’s political gamble implicitly conceded the point that Republicans are the more pro-Israel party.)

Republicans rejected Pelosi’s move — not, as some Democrat apologists have tried to claim, because they are somehow opposed to funding the Iron Dome, but because they were not going to allow Pelosi to use them as pawns in a budgetary crisis of her own creation.

House Democrats have, after all, insisted on unilateral votes on spending measures since Joe Biden took office, overriding Republican objections and amendments. Funding the government is, hence, their problem.

Meanwhile, the group of so-called “progressive” left-wing members of Congress known as the Squad, and nominally led by Ocasio-Cortez, decided that if the Iron Dome was in Pelosi’s bill to fund the government; they would vote against it.

What was new was not that the members of the “Squad” opposed Israel’s right to defend itself against Palestinian terror; that much was known. What was new was that the leadership of the Democratic Party capitulated to them so publicly.

Previous concessions had been quieter.

Speaker of the House Nancy Pelosi (D-CA) knew exactly what then-freshman Rep. Ilhan Omar (D-MN) thought about Israel when she appointed her to the House Foreign Affairs Committee in 2019.

Omar’s appointment immediately backfired when she began making antisemitic statements. But Pelosi never removed Omar from the committee; instead, she let her save face with a weak resolution condemning antisemitism — as well as Islamophobia.

If Pelosi is frustrated that "the squad" gets too much attention when they disagree with leadership, it strikes me as very weird that she posed with them for a Rolling Stone cover. pic.twitter.com/qAUU6EtjCF

The Iron Dome has become more important than ever before, given that it proved crucial to the defense of Israel’s civilian population in May.

In that conflict, Hamas terrorists fired thousands of rockets — not just in border cities, not at right-wing “settlers,” but at Tel Aviv itself, the center of Israel’s economy, and the home of the urbane secular leftists whom Democrats and left-wing groups like J Street are eager to promote as their preferred cultural constituency in Israeli domestic politics. 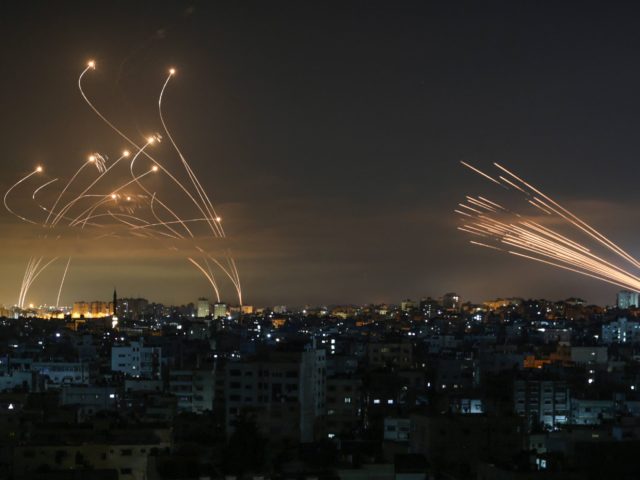 Rockets are seen in the night sky fired towards Israel from Beit Lahia in the northern Gaza Strip on May 14, 2021. – Israel bombarded Gaza with artillery and air strikes on Friday, May 14, in response to a new barrage of rocket fire from the Hamas-run enclave, but stopped short of a ground offensive in the conflict that has now claimed more than 100 Palestinian lives. As the violence intensified, Israel said it was carrying out an attack “in the Gaza Strip” although it later clarified there were no boots on the ground. (Photo by ANAS BABA / AFP) (Photo by ANAS BABA/AFP via Getty Images)

Democrats have also viewed Iron Dome as something like a talismanic protection against the claim that they are becoming an anti-Israel party.

In the worst days of the Obama administration’s diplomatic assault on Israel, after then-Vice President Biden had condemned Israeli construction in Jewish neighborhoods of Jerusalem, and Obama was pursuing an ill-advised nuclear deal with Tehran, Democrats in Congress passed funding for Iron Dome to show they were still pro-Israel after all.

Likewise, when the Biden administration wanted to show that it supported Israel, after initially — and foolishly — appearing to side with the Palestinians in May, the president promised to replenish Israel’s depleted Iron Dome missile stockpile.

But the Squad, led by AOC, vowed to punish Israel for having the temerity to defend itself, and began pushing for an end to U.S. arms sales to Israel, starting with the precision weapons that Israel uses to target Palestinian terrorists in Gaza.

When they refused to vote for a budget with Iron Dome, Pelosi bowed to their wishes. The anti-Israel Squad proved that while it does not represent the majority of the Democratic Party caucus, it can control it, and its leaders, at key moments.
And the reason the Squad can do so is that Democrats simply do not support Israel enough to stand up against them. In 2018, when the U.S. opened its embassy in Jerusalem — something even Democrats claimed to want for decades — not one elected Democrat came to the ceremony, nor did any attend a parallel celebration at the Israeli embassy in Washington.

Just this week, when President Biden addressed the United Nations General Assembly, he stated that the U.S. supports Israel’s security — “But” — that security depended on the two-state solution, and the creation of “a viable, sovereign, and democratic Palestinian state” that the Palestinians themselves have shown almost no interest in building, after decades.

In the wake of the disastrous Afghanistan withdrawal, our allies understand, more than ever, that they are vulnerable to shifts in American domestic politics.

The Democrats’ decision to drop Iron Dome in deference to the Squad cannot be redeemed by the later vote to fund it. The message was sent: the Democratic Party cannot be trusted to support Israel.