The so-called bipartisan infrastructure bill contains a provision that could put Americans up to five years in jail for failing to report receipt of cryptocurrency assets.

The $1.2 trillion so-called bipartisan infrastructure bill, otherwise known as the Infrastructure Investment and Jobs Act, contains one section that would require any broker that transfers any digital currencies to file a tax return under a “modified information reporting regime.”

Conservatives and industry officials warned the provision could kill Americans’ jobs and threaten liberties, even though it would only raise $30 billion to offset the cost of the gargantuan infrastructure bill.

However, the bill also contains an onerous reporting requirement that could put Americans in jail for failure to report cryptocurrency transactions.

Rep. Ted Budd (R-NC), a pro-cryptocurrency lawmaker, told Breitbart News in an exclusive comment Tuesday that congressional Democrats added another provision that would prevent America from leading in the cryptocurrency industry.

“Congressional Democrats have a completely antiquated view of cryptocurrency and that has led them to add yet another burdensome hurdle to everyday crypto investors. The United States needs to be leading the world in the digital asset space instead of overregulating it and pushing it overseas,” the North Carolina conservative said. 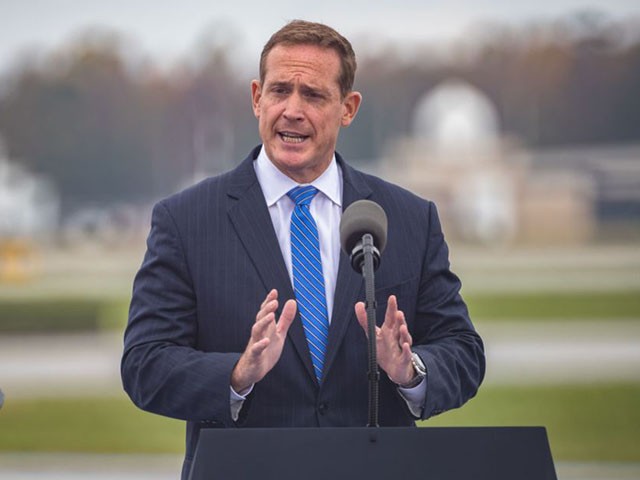 Abraham Sutherland wrote a report for the Proof of Stake Alliance that noted the so-called bipartisan infrastructure bill contains a provision to amend tax code 6050I that would make it a felony if one did not report receiving digital assets, whether it be cryptocurrencies such as Bitcoin or Ethereum, Non-Fungible Tokens (NFTs), or any other digital assets.

The proposed amendment to Section 6050I states that, in a broad range of scenarios, “any person” who receives over $10,000 in digital assets must verify the sender’s personal information, including Social Security number, and sign and submit a report to the government within 15 days. Failure to comply results in mandatory fines and can be a felony (up to five years in prison).

Miners, stakers, lenders, decentralized application and marketplace users, traders, businesses and individuals are all at risk of being subject to this reporting requirement, even though in most situations the person or entity in receipt is not in the position to report the required information.

“A statute creating felony crimes for users of digital assets should be debated openly, not quietly inserted into a spending bill,” Sutherland said.

Peter Van Valkenburgh, the research director for the crypto-think tank Coin Center, said that the cryptocurrency reporting requirement is “unworkable” and “arguably unconstitutional.”

Typically we don’t object to equal treatment of cash and cryptocurrencies, but the §6050I reporting provision is a draconian surveillance rule that should have been ruled unconstitutional long ago. Extending it to cryptocurrency transactions would further erode the privacy of law-abiding Americans. As the report describes in detail, §6050I would also be anachronistic and therefore difficult or impossible to obey in the context of cryptocurrency transactions.

“If this provision becomes law, it will be ripe for a constitutional challenge and Coin Center is prepared to take on that challenge,” Valkenburgh said.