Republican Glenn Youngkin, who is running for governor of Virginia, went on offense during an appearance on SiriusXM’s Breitbart News Saturday, contending that his opponent, former Gov. Terry McAuliffe (D), has become “desperate” in the final month of campaigning.

“They’re desperate now. I mean every morning you wake up, and there’s literally a four-alarm fire article about what’s going on inside the McAuliffe campaign,” he said.

In addition to articles such as a recent piece from the left-wing outlet Slate titled “Uh, Maybe Democrats Should Start Paying Attention to the Virginia Governor’s Race” and an op-ed in the Washington Post titled “Wake up, Virginia Democrats. There’s serious Trumpist danger ahead,” a report from Politico this past week observed that “fear” within the Biden administration about McAuliffe losing “is real.”

Politico cited three unnamed sources in its report as it stated, “It’s a scenario the president and his aides and close allies increasingly view as a real possibility, given tightening poll numbers in the race and signs of Democratic apathy.”

Polls have indeed tightened since August and are typically giving McAuliffe a small edge that usually falls within the margins of error. Additionally, Youngkin’s campaign saw a couple positive developments in the race recently after one poll showed Youngkin five points ahead of McAuliffe among likely voters and Cook Political Report changed its race rating from “lean D” to “toss up.”

Youngkin said, “You’ve got the White House questioning whether Terry can win or not and what that means to their broad legislative agenda, which is why I’m so intent on beating him.”

He noted McAuliffe’s involvement with “the swamp” given McAuliffe has gained powerful Democrat allies — most notably the Clintons — through his longtime role within the party. “You’ve got a 43-year politician. That’s what Terry McAuliffe is. He is a creature of the swamp. I mean, if Bill and Hillary Clinton had a son, it would be Terry McAuliffe, and his uncle would be Joe Biden. This is the world he grew up in, and they’re doing everything they can,” Youngkin said. 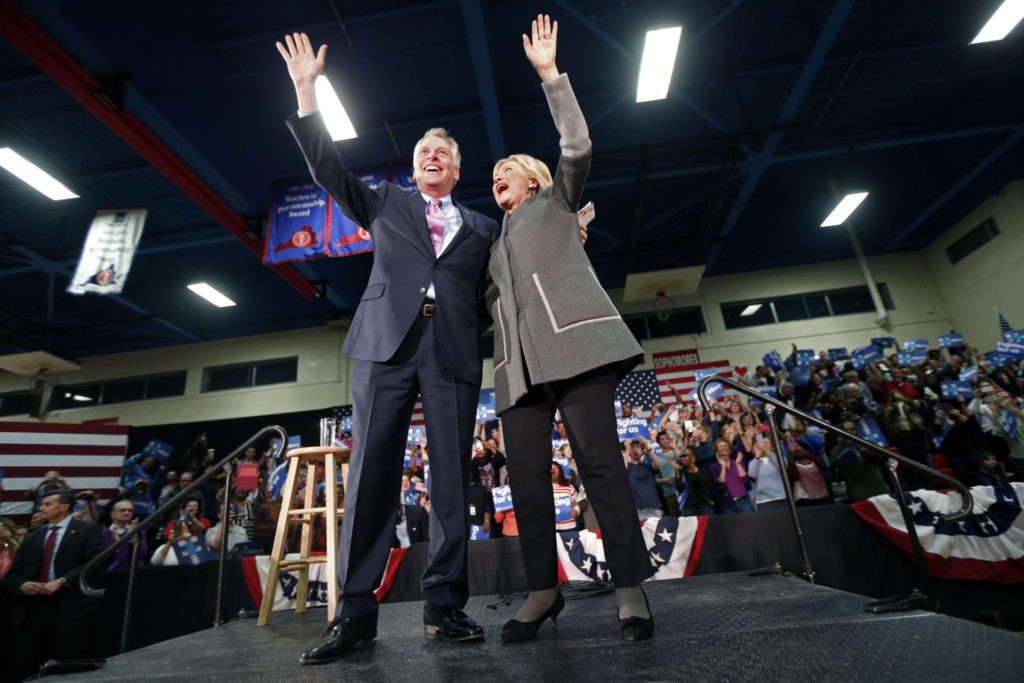 This Monday February 29, 2016, file photo shows Virginia Gov. Terry McAuliffe waves to the crowd along with Democrat presidential candidate Hillary Clinton as she arrives to speak at a campaign rally in Norfolk, Virginia. (AP Photo/Gerald Herbert)

The Virginia Republican also discussed the super PAC Accountability Virginia’s recent advertising ploy. Axios revealed this past week the group — which has clear ties to Democrats — had disguised itself as Republican-aligned as it pushed out targeted political ads on Google, Snapchat, Facebook, and Instagram attacking Youngkin on Second Amendment issues.

Accountability Virginia had spent more than $25,000 on the ads, Axios had assessed, but since the outlet’s report, its estimated Facebook spending, for instance, has nearly doubled from $7,450 to $14,852, so that overall figure could be higher.

The ads on Facebook pushed out negative gun-related attacks, including one reading, “Glenn Youngkin REFUSES to tell us where he stands on guns and the Second Amendment,” and another stating, “If we can’t trust Glenn Youngkin on guns, what can we trust him on?”

There is no evidence McAuliffe himself is behind the scheme, but Youngkin attributed the tactic to a concerted and fraudulent Democrat effort to derail his campaign without specifically naming McAuliffe.

Youngkin did not indicate his campaign was fazed by the ads, evaluating instead that he has momentum on his side and that McAuliffe’s “outrageous leftist agenda” is swinging voters. “It’s Republicans. I’m winning independents. We’ve brought over tons of Democrats. … This is a movement. It’s no longer a campaign.”