VERDICT: FALSE. The Trump administration accused China of genocide; meanwhile, Biden has been soft on China.

White House press secretary Jen Psaki claimed Wednesday that President Biden had spoken out against human rights abuses in China — whereas, she said, President Trump did not.

In response to a question about whether the Biden administration was overlooking China’s genocide of Uighur Muslims as it sought cooperation with the communist government on climate change, Psaki said: “We unlike the former president, this president has spoken out against human rights abuses, has raised his concern about human rights abuses directly with President Xi, and we have done that at every level.”

While the Biden administration has raised Chinese human rights abuses, it has done so ineffectively, with China quoting the Black Lives Matter movement on alleged U.S. human rights abuses. Meanwhile, it has softened Trump’s approach to China.

Moreover, the claim that Trump did not speak out against human rights abuses in China is flatly untrue, and simply reflects a false Democrat talking point that Trump preferred dictators to democratic leaders.

Trump repeatedly slammed China on a variety of issues — and human rights was one of them, even if trade and coronavirus were more frequent points of criticism.

We are also concerned that the government is destroying or limiting access to houses of worship, including Protestant and Catholic churches and community buildings.

We strongly urge the Chinese government to protect the religious freedom of all individuals and to respect the human rights of all members of religious groups in accordance to China’s international commitments to respect freedom of religion.

In 2019, Trump met with survivors of religious persecution, and openly discussed China’s persecution of Uighurs. 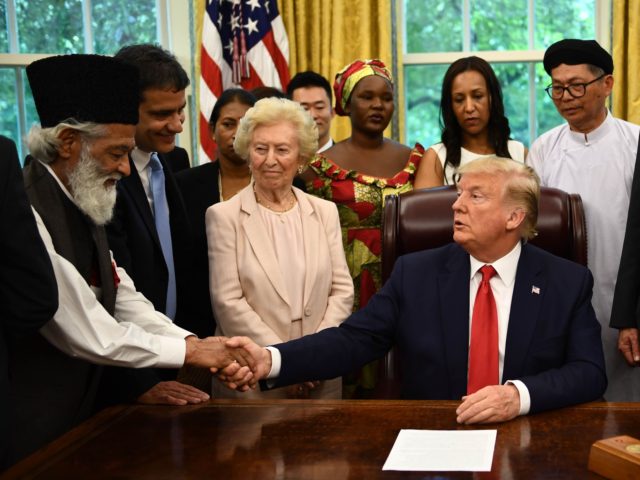 US President Donald Trump meets with survivors of religious persecution on July 17, 2019, in the Oval Office of the White House in Washington, DC. (Photo by Brendan Smialowski / AFP) (Photo credit should read BRENDAN SMIALOWSKI/AFP via Getty Images)

And in 2021, before leaving office, Secretary of State Mike Pompeo declared that the Trump administration had determined that China’s treatment of the Uighur Muslims amounted to genocide.

Biden has a long history of being soft on China, including on its human rights abuses. He flew his son, Hunter Biden, to China on Air Force Two in 2013, after which the younger Biden entered into lucrative business arrangements with a firm linked to the Chinese government. And after leaving office in 2017, Biden allegedly entered into an effort to start a joint venture with a corrupt Chinese company, in which he was to have held 10% equity — regardless of human rights concerns.