A group of 17 Christian missionaries including children was kidnapped late Saturday by an armed gang near Haiti’s Port-au-Prince, a voice message sent to various religious missions by an organization with direct knowledge of the incident has claimed.

The religious aid workers were on their way home from building an orphanage when they were snatched off their transportation by an armed gang, according to a message from Ohio-based Christian Aid Ministries.

“This is a special prayer alert,” the one-minute message said, according to AP. “Pray that the gang members would come to repentance.”

The message says the mission’s field director is working with the U.S. Embassy, and the field director’s family and one other unidentified man stayed at the ministry’s base while everyone else visited the orphanage. 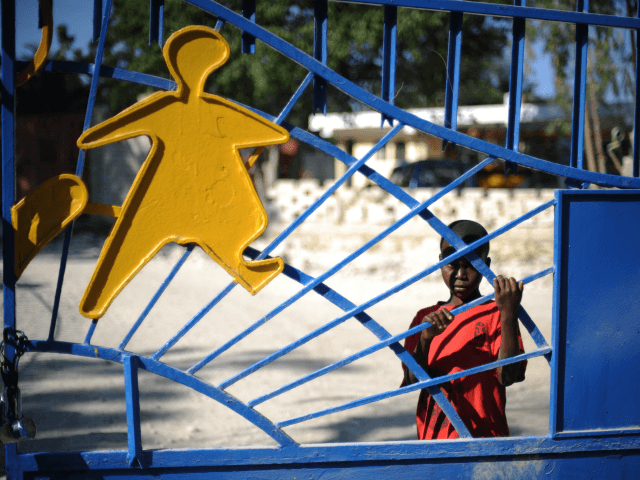 A child waits at the gates of the SOS Children’s Village in Croix des Bouquets, outside of Port-au-Prince. (ROBERTO SCHMIDT/AFP/Getty Images)

No other details were immediately available.

A U.S. government spokesperson said they were aware of the reports on the kidnapping.

“The welfare and safety of U.S. citizens abroad is one of the highest priorities of the Department of State,” the spokesperson said, declining further comment.

Haiti has one of the highest rates of kidnapping in the world, as powerful gangs exploit the lawless situation to make money from ransom payments.

Since the killing of President Jovenel Moïse in July, rival factions have been trying to gain control and the lack of security has intensified the daily struggle to survive of many Haitians.

The National Police of Haiti confirmed that they killed four suspects in the assassination or President Jovenel Moïse in a shootout. https://t.co/h9EaGvNjry

The Christian missionaries were seized shortly after leaving the town of Croix-des-Bouquets and continue to be held by the gang, according to a security source quoted by the AFP news agency.

At least 328 kidnapping victims were reported to Haitian police in the first eight months of 2021, compared with a total of 234 for all of 2020, according to a recent U.N. report.

As Breitbart News reported, in April an armed gang called 400 Mawozo abducted ten people in the country: two religious sisters, five priests, and three family members of one of the priests.

The kidnappers demanded a ransom of $1 million for the group, Vatican News reported, which included one French priest and one French nun. The rest were Haitians.