The Democrat mayor announced a vaccine mandate for city workers on Wednesday. Workers have until Friday, October 29, to show proof of receiving at least one dose. According to the governor’s office, employees who fail to show proof will be placed on unpaid leave until they do so.

Overall, the mandate extends to 160,500 city workers, including NYPD officers as well as FDNY firefighters. “There is no greater privilege than serving the people of New York City, and that privilege comes with a responsibility to keep yourself and your community safe,” the Democrat mayor said in a statement.

“We have led the way against COVID-19 – from fighting for the right to vaccinate frontline workers, to providing nation-leading incentives, to creating the Key to NYC mandate,” he continued, bragging of the city’s vaccine passport program, which forces private businesses to discriminate against the unvaccinated.

“As we continue our recovery for all of us, city workers have been a daily inspiration. Now is the time for them to show their city the path out of this pandemic once and for all,” he added.

Already, some city workers are pushing back. The PBA, which represents over 50,000 active and retired police officers, is vowing to take legal action. 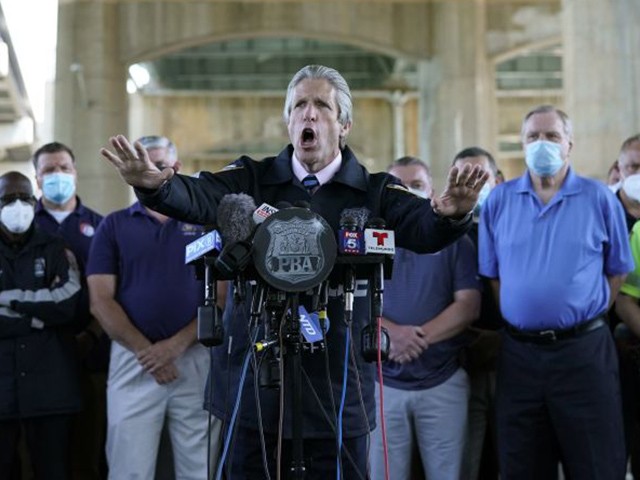 Police Benevolent Association of the City of New York President Pat Lynch and representatives from other NYPD and law enforcement unions holds a news conference at the Icahn Stadium parking lot on June 9, 2020 to address the “current anti-law enforcement environment.” in New York. (Photo by TIMOTHY A. CLARY/AFP via Getty Images)

“From the beginning of the de Blasio administration’s haphazard vaccine rollout, we have fought to make every member who chooses it, while also protecting their right to make that personal medical decision in consultation with their own doctor,” PBA President Patrick J. Lynch said in a statement.

“Now that the city has moved to unilaterally impose a mandate, we will proceed with legal action to protect our members’ rights,” he added:

The governor’s office says it will begin “impact bargaining with affected unions immediately.”

Mayor de Blasio’s announcement comes roughly two weeks after telling reporters that he prefers to “respect people’s intelligence” before forcing them to get vaccinated. The response came after a reporter asked de Blasio why he had yet to issue a vaccine mandate for city workers, including NYPD and FDNY.

“I think everyone out there is mature adults. I’d like to respect people’s intelligence,” de Blasio said. “We have, I think, pretty meticulously over the course of the pandemic tried to figure out what made sense to do, when, and make sure we had all the pieces in place.”

“I do believe you sequence things in different ways. And there are still issues we have to understand better and resolve. It’s not always a matter of just push a button. You have to get things right,” he added.