Republicans in the Ohio state legislature have introduced a bill to protect minors from “gender transitioning” treatments as the transgender movement pushes for children to alter their biological sex through drugs and surgery.

House Bill 454, the Save Adolescents from Experimentation (SAFE) Act, is sponsored by state representatives Gary Click of Sandusky County and Diane Grendell of Geauga County, and 23 other Republicans are cosponsoring the bill.

The bill would protect minors under 18.

Cleveland.com reported on the development using the LGBT movement’s narrative by calling the life-altering treatment “gender-affirming,” and it described the bill’s effort to allow children to mature before making such impactful decisions as creating “restrictions on private insurance plans and Ohio Medicaid, potential sanctions on the licenses of medical professionals, potential cuts to public funding of hospitals and clinics.” The source added that the bill places “limits to what a school official can keep from parents when a child shares their gender identity in private.”

An American Society of Plastic Surgery report shows a double-digit hike in trans surgeries during COVID, while other health care dropped. https://t.co/nFjFTZdCwR

The media outlet’s report reveals how the transgender movement tramples on parental rights:

Aaron Baer, president of the Center for Christian Virtue, a Christian conservative policy organization formerly known as Citizens for Community Values, said that his group is championing the bill in Ohio and helped draft HB 454. It contains the same provisions [an] Arkansas bill, which the Family Research Council and the Alliance Defending Freedom helped author.

The Center for Christian Virtue first became interested in banning gender-affirming care on minors after a Hamilton County judge in 2018 granted custody of a then 17-year-old who identified as male to his grandparents, Baer said.

The child’s parents opposed hormone therapy. But the child had been suicidal and in psychiatric care at Cincinnati Children’s Hospital, which had contacted Hamilton County Job and Family Services and refused to turn the boy over to the custody of his parents, based on information he told doctors. The teen’s attorney told the court that the parents once forced the child to sit in a room and listen to Bible scriptures for more than six hours.

“The narrative that some would like to bully us into accepting is nothing short of ‘affirmation equals love and healing, and disagreement equals hate and harm,’” David Mahan of the Center for Christian Virtue, said in the report. “The reality is that permanently medicalizing and potentially sterilizing children … is unethical and a gross violation of the Hippocratic Oath, which states, ‘First do no Harm.’” He continued, “This bill is not about opposing a people group or an ideology. The SAFE Act is about protecting vulnerable children from experimentation and exploitation.” 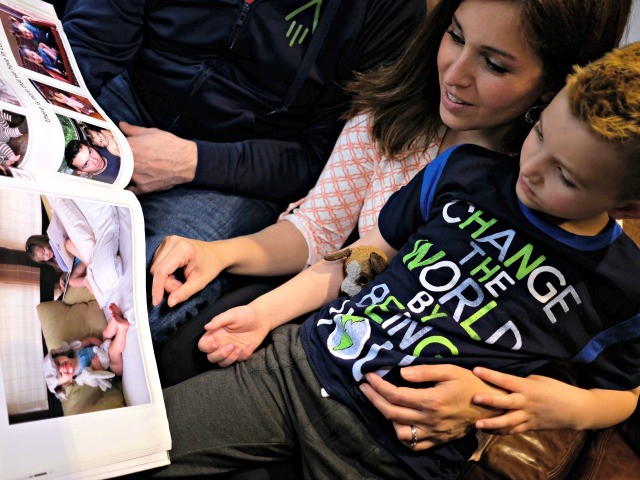 Seven-year-old transgender Jacob Lemay and his parents Joe and Mimi look at their family photo before his transition at their home in Melrose, Massachusetts, on May 9, 2017. (Jewel Samad/AFP via Getty Images)

The LGBT activist group Equality Ohio opposes the bill and said it could be blocked by a judge in Ohio too, as it was with Arkansas legislation.

“If HB 454 moves forward, Ohio taxpayers will be footing the bill when valid legal challenges undoubtedly arise,” Maria Bruno, Equality Ohio’s public policy director, said. “We hope the majority of Ohio’s lawmakers will see through this political grandstanding and reject this illegal, cruel attempt to harm transgender youth in Ohio.”