With 66 percent of the votes counted, Youngkin had received 55 percent, or 1,048,005 votes, and McAuliffe was at 44 percent, or 846,753 votes, according to the Virginia Public Access Project (VPAP). Liberation Party candidate Princess Blanding had received 0.6 percent, or 12,288 votes. Decision Desk HQ called the race shortly after 8:30 p.m.

Youngkin is celebrating election night here at the Westfields Marriott Dulles Washington, where hundreds of supporters and campaign staffers are gathered in the hotel to watch the results and cheer on their candidate, some holding signs that say “Parents for Youngkin,” “Farmers for Youngkin,” and “Democrats for Youngkin.” The now governor-elect is expected to deliver remarks at the hotel later this evening.

Youngkin, a former CEO of the Carlyle Group who was virtually unknown to Virginians prior to his bid for office, is the first Republican to win the governorship since Bob McDonnell’s victory in 2009.

Virginia’s state legislature also became a Democrat trifecta in 2019 for the first time in more than two decades, leading Gov. Ralph Northam (D) to announce to a crowd in Richmond after that race, “I’m here to officially declare today, November 5, 2019, that Virginia is officially blue.”

Northam, who is term-limited and unable to seek reelection, had endorsed McAuliffe in the race. The Virginia governor had not made a public comment on the 2021 gubernatorial race outcome as of the time of this writing.

McAuliffe, a longtime politician well-connected to powerful Democrats like Bill and Hillary Clinton, geared much of his campaign strategy toward tying Youngkin to Trump in a state that has proven to be generally cold toward the former president based on the past two presidential outcomes.

Youngkin, however, barely resembled Trump as he focused his campaign on education reform, lowering taxes, and creating jobs, targeting Virginia-specific issues rather than embracing the “MAGA” brand and America First agenda items as the former president did during his tenure.

Youngkin also did not close out his campaign with Trump, or any other major Republican players, while McAuliffe called in all the big-name surrogates — Biden, Obama, Vice President Kamala Harris, and activist Stacey Abrams — in an attempt to boost his campaign. 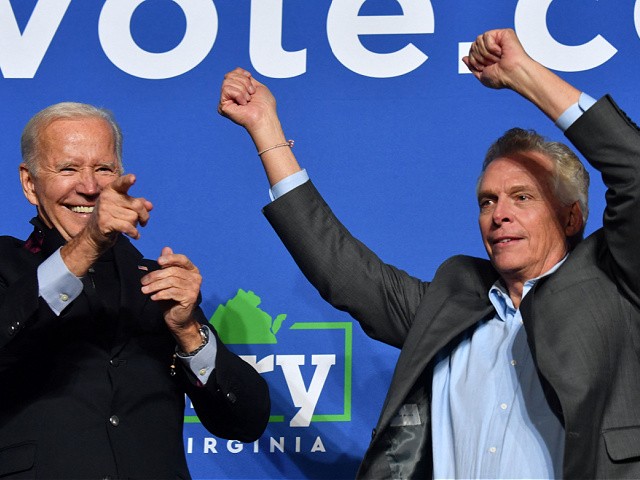 Youngkin’s team noted during the final ten days of campaigning that the Virginia Republican was embarking on a marathon 50-stop statewide tour free of surrogates “to highlight the contrast between the grassroots enthusiasm for Glenn Youngkin’s candidacy and Terry McAuliffe’s desperate campaign that needs fellow career politicians … to draw mediocre crowds that attended to see the surrogates, not Terry.”

With Youngkin also self-funding more than a third of the $57 million he raised, according to VPAP, the wealthy businessman was able to keep pace with McAuliffe, a notoriously prolific fundraiser, in terms of campaign cash. McAuliffe had started 2021 with $5 million on hand and went on to raise more than $51 million, positioning himself nearly evenly with Youngkin fundraising-wise as of October 21. 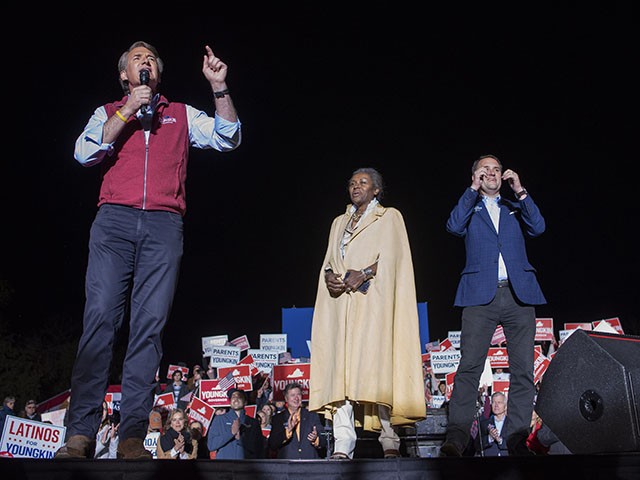 As far as polling, Youngkin’s momentum began to pick up in August, a shift that aligned almost perfectly with Biden’s plunge in job approval. The president’s approval rating began to drop noticeably in August following the disastrous withdrawal of U.S. troops from Afghanistan, and it continued into October as the president failed to unite Democrats on his multitrillion-dollar infrastructure plans, which still continue hitting snags in Congress.

Virginia’s off-year governor’s race has for decades served as a national bellwether and a referendum on the party controlling Washington. With Biden’s approval at a record-low amid the infrastructure bill disagreements, supply chain woes, and inflated costs straining Americans in everyday places like the gas pumps and grocery stores, this race does indeed appear to serve, at least in part, as a check on the Biden administration.

Youngkin was running alongside former Del. Winsome Sears, a Jamaican immigrant and military veteran running for lieutenant governor, and Del. Jason Miyares, a Cuban American angling to unseat incumbent Attorney General Mark Herring (D). Both of the Virginia Republicans had also been declared winners by Decision Desk HQ as of the time of this writing.