The menu for the United Nation’s (U.N.) annual climate change conference, Cop26, included close to 60 percent meat or dairy-based meals despite advocating for a switch to plant-based diets to save the climate.

The 26th annual Conference of the Parties, where President Joe Biden dozed off, is a yearly meeting where world leaders gather to discuss strategies to combat climate change. In 2015, COP21 happened in Paris, which gave the world the infamous Paris climate agreement.

One of the ways the U.N. recommends limiting global warming to below two degrees is moving from eating red meat and dairy products in exchange for a plant-based diet. According to the Big Issue, “emissions from global livestock production for meat and dairy account for 14.5 per cent of all human-driven emissions.” 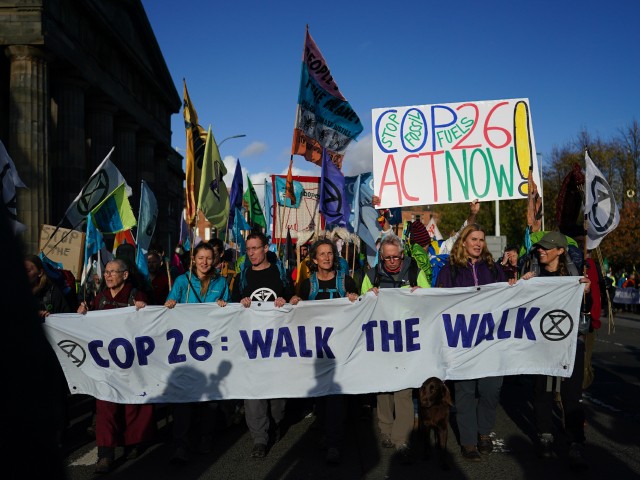 A 2018 Intergovernmental Panel on Climate Change (IPCC) special report on climate change said, “Meat analogues such as imitation meat (from plant products), cultured meat, and insects may help in the transition to more healthy and sustainable diets.”

In addition, many popular Democrat politicians in the United States have adopted the U.N.’s view on eating meat. For example, former President Barack Obama warned that eating meat raises climate emissions. “People aren’t as familiar with the impact of cows and methane,” Obama said in 2018, adding that, “as people want to increase more meat consumption, that in turn is spiking the growth of greenhouse emissions coming out of the agricultural sector.”

Green New Deal co-sponsor Alexandria Ocasio-Cortez (D-NY) said in 2019, “we’ve got to address factory farming. Maybe we shouldn’t be eating a hamburger for breakfast, lunch, and dinner. Like, let’s keep it real.”

On the 2020 campaign trail, Vice President Kamala Harris said, “Yes, I would,” when asked what changes she would make to the food pyramid. The New York Times even proposed a “carbon tax on beef” at one point.

In April 2021, President Joe Biden announced his goal to cut emissions by 50 percent by 2030. There were rumors that Biden’s plan would likely mirror a Michigan University study that found emissions could be lowered if Americans cut their red meat consumption by 90 percent.

Not gonna happen in Texas! pic.twitter.com/zqYS9kH8CU

Conservative politicians were outraged at this rumored suggestion, which led to the Biden administration clearing the record. However, Biden’s Secretary of Agriculture told Politico in April, “There is no effort designed to limit people’s intake of beef coming out of President Biden’s White House or USDA.”

Despite these calls from politicians and world leaders to reduce meat and dairy consumption, almost 60 percent of the menu at Glasgow’s COP26 contained meat or dairy.

Although their goal is below 0.5kg CO2e, the dish with the highest carbon footprint uses 3.4kg of carbon.

Animal Rebellion spokesperson Joel Scott-Halkes criticized the menu. “The utterly reckless inclusion of meat, seafood and dairy on the COP26 catering menu is a damning indictment of the UK government’s utter failure to grasp the root cause of the climate crisis,” Scott-Halkes said. “It’s like serving cigarettes at a lung cancer conference,” he continued.