Assistant District Attorney James Kraus appeared stunned after a key prosecution witness in the murder trial of Kyle Rittenhouse in Kenosha, Wisconsin, Gaige Grosskreutz, admitted that he was only shot after he pursued the fleeing teenager and drew his own weapon, a handgun, and pointed it at Rittenhouse.

Grosskreutz was shot in the bicep, one of three people whom Rittenhouse shot that evening.

Rittenhouse, an Illinois resident, was in Wisconsin, working as a lifeguard, and joined other volunteers in protecting Kenosha businesses during Black Lives Matter riots. 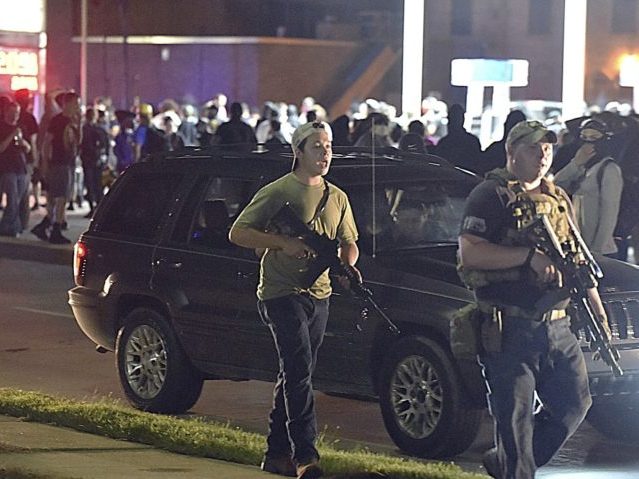 In this Aug. 25, 2020, file photo, Kyle Rittenhouse, left, with backwards cap, walks along Sheridan Road in Kenosha, Wis., with another armed civilian. A Republican student group at Arizona State University is receiving backlash for donating money to Rittenhouse, the 17-year-old gunman who fatally shot two protesters in Wisconsin. College Republicans United announced this week that half of any funds they raise during the semester will go toward paying for the legal defense of Kyle Rittenhouse. (Adam Rogan/The Journal Times via AP, File)

He also cleaned graffiti off buildings and offered medical aid to protesters, before being attacked during a riot. In the melee, he fired an AR-15 rifle in what his lawyers claimed was self-defense, killing two and wounding Grosskreutz.

Democrats seized on the event in an attempt to blame President Donald Trump for the Kenosha riots, which had been a serious liability for then-candidate Joe Biden, who was slow to condemn them.

Biden claimed, without evidence, that the 17-year-old Rittenhouse was a “white supremacist” — a claim that led immediately to threats of a defamation lawsuit from Rittenhouse’s attorney.

Rittenhouse faces several counts of murder, as well as a weapons charge and a curfew citation.

During cross-examination, defense attorney Corey Chirafisi noted that Grosskreutz had lied to police about being armed.

Chirafisi brings up statement Grosskreutz made to police on Aug. 26, saying at some point during Aug. 25 his Glock fell off his waist. Grosskreutz said he didn’t remember making that statement, but confirms it via written statement.

Chirafisi says “That’s a lie, no?” regarding the statement the gun fell. Grosskreutz says what he wrote was not a lie. “I told multiple officers that I dropped my firearm,” the statement reads, according to Chirafisi.

“You were chasing Mr. Rittenhouse with your gun, right?” Chirafisi asks. Grosskreutz says “I wasn’t chasing the defendant.”

“You omitted the fact (to police) that you ran up on him and had a Glock pistol in your hand?” Chirafisi asks, which Grosskreutz confirms, but notes that he just got out of surgery and “was on pain meds,” and the “traumatic experience I had just gone through.” Grosskreutz says that the omission was not “purposeful.”

Chirafisi then brings up that Grosskreutz had a “thoughtful process” to not share his occupation (out of concerns for safety) and make other statements accurately, but then he somehow didn’t mention having a gun.

Grosskreutz said he was advised by his lawyer to not answer questions from police about the shooting itself.

The defense attorney then showed Grosskreutz a still image from a video of the shooting, at the moment when his arm was shot — as he held a pistol in his hand, aimed at Rittenhouse.

“It wasn’t until you pointed your gun at him, advanced on him, with your gun — now your hand’s down — pointed at him, that — that he fired, correct?” Chirafisi asked.

At that point, Rittenhouse, watching the exchange, rubbed his eyes, as if in relief. A prosecutor, Assistant District Attorney James Kraus, appeared to rest his forehead on his left hand, almost despondent, as he composed a message on his phone with his right.

The defense ended its cross-examination when Grosskreutz admitted that he never tried to talk to Rittenhouse to stop the violence.

Some observers opined that the defense should immediately move for a directed verdict — essentially, asking the judge to acquit Rittenhouse on the spot, on the grounds of self-defense.

Rittenhouse trial should be over immediately. pic.twitter.com/PHZnHS5rD9

Last year, Facebook prevented users from defending Rittenhouse on the platform, calling the incident a “mass murder,” thus presuming Rittenhouse’s guilt. Twitter locked the account of a Rittenhouse attorney, and a police officer lost his job for donating to Rittenhouse’s defense.

President Trump said at the time that it looked as if Rittenhouse had acted in self-defense — for which CNN accused him of racism.

Correction: the prosecutor was James Kraus, not Thomas Binger.