Rep. Scott Perry (R-PA) has ambitious plans for the House Freedom Caucus when he takes over as chairman in January, but he fully intends for the caucus to remain as the “conscience” for the House Republican Conference, especially as some in the party deviate from their conservative campaign promises.

Perry, who spoke to Breitbart News over the phone on Tuesday while he is recovering from coronavirus, outlined what he sees for the future of the Freedom Caucus, a tightknit right-wing group established in 2015 out of frustration with then-GOP leadership.

Items on Perry’s agenda include advocating for procedural rule changes that ultimately “decentralize power” in Congress and focusing heavily on committee assignments for Freedom Caucus members, who, he said, are typically “shut out” of serving on the most desirable committees.

As far as caucus influence, Perry teased that “there’s some other plans that have not been announced yet … but we are going to expand the reach of the Freedom Caucus greatly in the next couple months, and just stay tuned to hear about that, but we are a growing, thriving organization that has plans.”

Perry, an Army veteran who has served in Congress for close to nine years, summarized the core purpose of the caucus: “Most Republicans, if you listen to them, all stand for the same things — if you listen to them on the stump — but somehow, you know, it doesn’t always turn out that way, and the Freedom Caucus has habitually been kind of the conscience of the conference of the Republican Party in the House of Representatives, and we want to remain as such and expand that reach as such.” When Republicans are in the House majority and that majority is slimmer than the number of Freedom Caucus members, the caucus — not unlike the way the Congressional Progressive Caucus has been functioning under House Speaker Nancy Pelosi (D-CA) — has leverage over critical votes.

Breitbart News spoke to multiple members of the caucus, who all praised Perry after he was elected Monday to replace current chairman Rep. Andy Biggs (R-AZ), who is being term-limited out of the position.

Rep. Jim Jordan (R-OH), the inaugural chairman of the caucus, called Perry a “super guy.” He is “the right guy to step in that role and lead the group,” Jordan said. Reps. Jim Jordan and Scott Perry talk with then-Rep. Mark Meadows, a fellow Freedom Caucus member, during a news conference in front of the Capitol on December 6, 2017, in Washington, DC. (Alex Wong/Getty Images)

Rep. Lauren Boebert (R-CO), an outspoken freshman member of Congress known for her one-liners and attention-grabbing political ads, said she is “thrilled” Perry will be the next chairman.

Rep. Chip Roy (R-TX) noted that there were other “strong candidates” — Reps. Ralph Norman (R-SC) and Warren Davidson (R-OH) were also in the running for the role — but he lauded Perry as a “great leader and a great friend.”

While Freedom Caucus membership remains somewhat nebulous by design, the group is sitting at around 40 members, according to multiple sources.

Perry, for his part, would not confirm the number, explaining that “this goes back to the early days, because members of the Freedom Caucus were targeted, and there wasn’t a great value proposition for being a member. … You had very few friends and leadership came after you.” He added that revealing one’s Freedom Caucus membership is done at the discretion of the member.

Perry also celebrated the caucus’s newest additions, who include, most recently, Rep. Madison Cawthorn (R-NC). “Especially with the last election, there’s a lot of new blood, a lot of enthusiasm, [and] of course there’s a lot more ladies, and some of them, of course, are very notable and strident and outspoken,” he said, citing Boebert, along with Reps. Marjorie Taylor Greene (R-GA), Mary Miller (R-IL), and Yvette Herrell (R-NM).

Roy spoke to the caucus’s influence, saying he believes it is “the strongest it’s ever been in terms of size, scope, and in terms of the number of people who are interested in what we’re doing. … I think leadership recognizes that.”

Since its inception, the caucus has served as a check on Republican leadership, famously pressuring former House Speaker John Boehner to resign from his position in fall 2015.

Perry, one of the Freedom Caucus’s original members, credited Boehner’s establishment-style governance as the “genesis” of the caucus but added that “it wasn’t just John. It was kind of the culture of Washington, DC. If you voted the wrong way, you got punished. If you didn’t have the appropriate fealty to leadership, there were punishments of various kinds, and we didn’t appreciate that, but we felt probably, individual by individual, that it was only us that felt that way until there were conversations around the table about some of the things that were occurring.”

House Minority Leader Kevin McCarthy (R-CA) appears at this stage to be in the best standing with the caucus of any GOP leader.

Jordan, a longtime conservative stalwart and vocal ally of both McCarthy and former President Donald Trump, said, “I think, for the first time, we’ve had a Republican leader who’s actually reached out to the Freedom Caucus and worked with conservatives in not just the Freedom Caucus but the conservatives in the conference, and I think that’s a great thing.” Jordan credited McCarthy with wrangling every House Republican, as well as two Democrats, to vote against the first impeachment of Trump in December 2019. 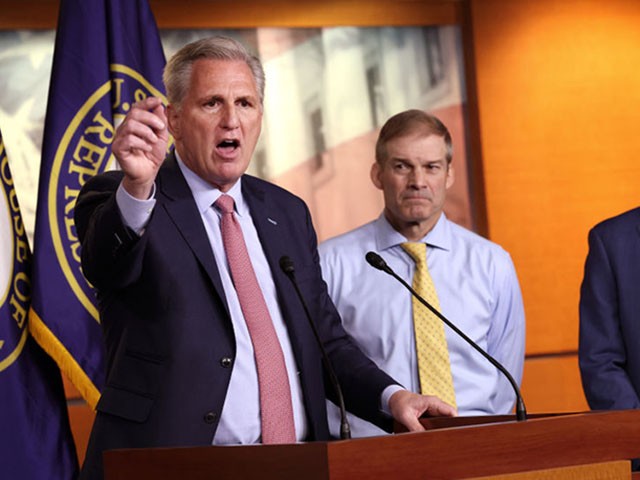 The relationship between the Freedom Caucus and McCarthy has not gone entirely without strain, however. One senior Republican aide close to leadership told Breitbart News that some caucus members are frustrated McCarthy has not held members accountable for bucking party lines by, for instance, pursuing kicking Rep. Liz Cheney (R-WY) off her committees or admonishing the 13 Republicans, including Rep. John Katko (R-NY), who voted in favor of President Joe Biden’s so-called “infrastructure” plan, which was packed with billions of dollars in leftist carveouts. Should Republicans take the majority back in 2022, Roy would not name prospective speakers but said, “I can tell you who I don’t want to see. I don’t want to see any human being who votes for the National Defense Authorization Act [NDAA] that would draft my daughter. That is a deal killer. I will not support anyone who does that. Period. Full stop.”

The NDAA passed the House in September with broad bipartisan support, but while 135 Republicans voted for it, 75 voted against it in part because of an amendment that would require women to register for the Selective Service. McCarthy, as well as GOP Conference Chair Rep. Elise Stefanik (R-NY), both voted in favor of the NDAA.

Perry said the Freedom Caucus does “stay engaged with Leader McCarthy. It doesn’t mean we’re satisfied with the outcome on many occasions.”

Should Republicans win the House majority in next year’s midterms, Perry said, “I think the next speaker should be the person that articulates the vision for advancing our country and stopping the advance toward socialism, whether that’s Leader McCarthy or someone else, it’s obviously still early. Nothing, Perry said, “including winning the majority, is fait accompli.”