New York Magazine will soon be releasing a book of essays extolling the many virtues of Rep. Alexandria-Ocasio-Cortez (D-NY), including her “making of the Green New Deal” and “the role that her beauty plays in her public perception.”

The book will not be published until February 1, 2022, according to its Amazon description. It will be an “engaging, all-encompassing biography” of the openly socialist congresswoman while aiming to be “in the bestselling tradition of Notorious RBG and Pelosi that explores her explosive rise and impact on the future of American culture and politics.”

NYMag producing book of essays on AOC's greatness, among them

"—An essay on her rare authenticity by Molly Fischer" pic.twitter.com/2mdHLGTQX9

“She is one of the most prominent politicians on social media, with millions of followers on Twitter, Instagram, and Facebook, making headlines consistently when she utilizes each platform to communicate her opinions, ideas, and progressive policies,” the description proudly hails.

The book will feature various essays from New York Magazine writers, including Rebecca Traister, Lisa Miller, Tim Shenk, David Wallace-Wells, and Molly Fischer. Despite her role as a feminist icon, which frequently shuns the mentioning of a woman’s beauty, the book will still feature a whole essay from Rhonda Garelick about “the role that her beauty plays in her public perception.” Here are just a few samplings:

To top it all if, the book will also feature “a deep dive on ‘The Squad'” and “a lighthearted piece on the ‘total average-ness of her boyfriend.'”

Hardcovers are going for $28 a pop.

Though AOC and the Democratic establishment have been at odds since her arrival to the political scene, that rift further widened in early November when she publicly rebuked longtime Democratic strategist James Carville for pinning the party’s recent election losses on “stupid wokeness.”

“[W]hat went wrong is just stupid wokeness,” said Carville. “Don’t just look at Virginia and New Jersey. Look at Long Island, look at Buffalo, look at Minneapolis, even look at Seattle, Wash. I mean, this ‘defund the police’ lunacy, this take Abraham Lincoln’s name off of schools. I mean that — people see that.” 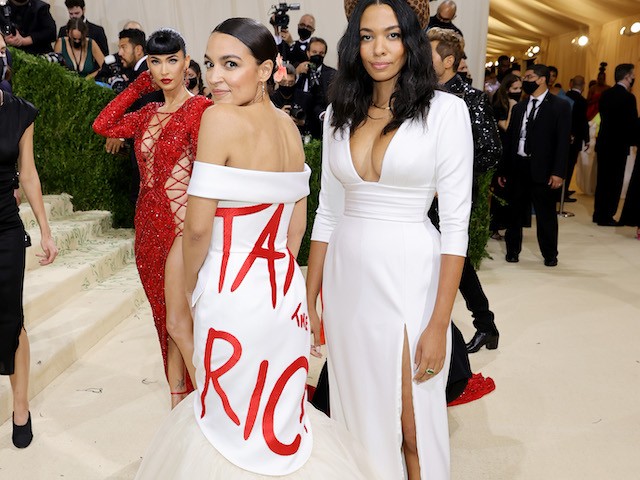 “It’s just really — has a suppressive effect all across the country on Democrats. Some of these people need to go to a ‘woke’ detox center or something,” Carville continued. “They’re expressing a language that people just don’t use, and there’s backlash and a frustration at that.”

“Like the average audience for people seriously using the word ‘woke’ in a 2021 political discussion are James Carville and Fox News pundits so that should tell you all you need to know,” Ocasio-Cortez tweeted.

“And before people disingenuously complain ‘woke’ is denigrating to older people, it’s actually pundits like Carville using terms like ‘woke’ to insult voters under 45 that’s denigrating,” she later added. “Don’t wonder why youth turnout falls when Dems talk about them like this. We need everyone.”