Donations to the Clinton Foundation hit $16.3 million last year, the lowest amount in at least a decade, down close to 75 percent from its 2016 peak of $62.9 million.

IRS filings revealed the Clinton Foundation received $16.3 million last year in grants and contributions. Some of the largest donors in 2020 include the Norwegian government, Haim and Cheryl Saban, and the Walton family.

“While 2020 brought urgent needs to address from the pandemic and a deepened focus on diversity, equity, and inclusion; it also was a difficult year for philanthropy,” Clinton Foundation CEO Kevin Thurm said. “Across the sector, resources were stretched thinly and fundraising activities were impacted.” 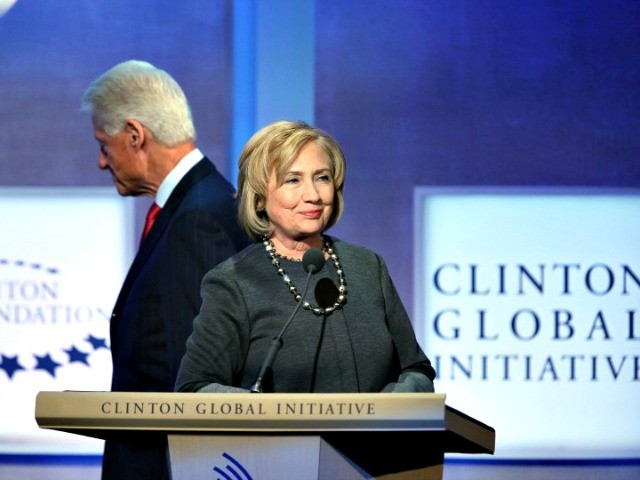 Donald Trump has called for the investigation of the Clinton Foundation, further intensifying scrutiny on the institution. Former Secretary of State Hillary Clinton (R) stands at the podium as former U.S. President Bill Clinton leaves the stage during the opening plenary session of the Clinton Global Initiative (CGI), on September 22, 2014, in New York City. (Photo by John Moore/Getty Images)

75 percent of nonprofit organizations said the pandemic negatively impacted revenues and fundraising, according to tax and accounting firm BDO.

As the Clintons lose their political relevance, so too do they lose donations to their foundation.

Indiana University professor Leslie Lenkowsky who studies philanthropy said, “I think it largely reflects the fact that the Clintons are less prominent these days and their ability to raise funds has been affected by that.” He also described the Clinton Foundation as a “celebrity foundation,” where donations to the organization rely mostly on the fame of its founders.

The Clinton Foundation operates the Clinton Presidential Center in Little Rock, Arkansas, where Bill Clinton will appear this week to celebrate the center’s 20th anniversary.