Hyde, who hired Roger Stone as a campaign consultant, knew his display would be provocative but did not expect it to make headlines. “Did I know it was provocative? Absolutely,” said Hyde. “Did I expect it to take on this level? No.”

Hyde denies that the display was a calculated effort to bring media attention to his campaign. He said the Christmas lights align with his campaign and personality. “It’s fully in keeping with my personality and my campaign,” he said. “Anybody who doesn’t like it, it’s one street… don’t come.”

Despite Hyde’s authenticity, Homes of Laurel Park Homeowner’s Association in Sarasota, Florida, did not approve of his Christmas display. Hyde believes the HOA’s disapproval stems from their liberal politics.

“If I put a message up there they liked, they’d be slapping me on the back. It’s got everything to do with they don’t like what it says,” Hyde said. However, the HOA’s president John Habbert denies Hyde’s claim. In an email, Habbert noted that the dispute has “nothing to do with politics,” calling it “a simple contract issue”:

When he purchased his house, Mr. Hyde signed documents stating that he would abide by all HOA rules — including no signs other than house numbers or For Sale notices. Other residents have been asked to remove signs and have complied without any problems, but Mr. Hyde refuses to do so.

The HOA’s property management company sent Hyde a letter on December 16 threatening to issue fines of “up to $150 per day until the violation ceases.”

“The Association would prefer not to fine unit owners and would anticipate that once owners are made aware of the violation, they would make every effort to correct it,” the letter said. “Thank you for your prompt attention to this matter.” 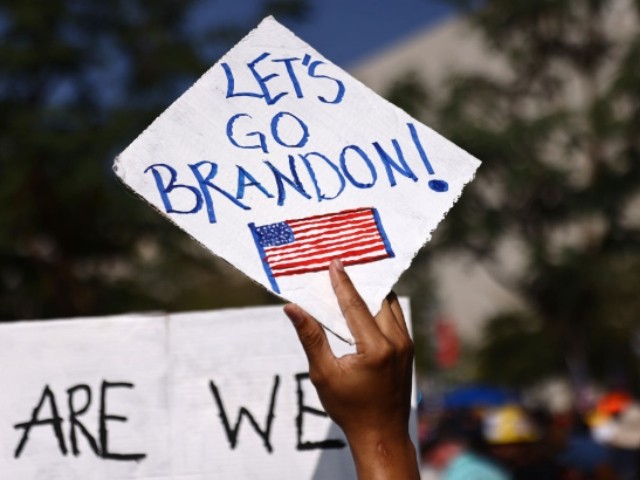 A protestor holds a ‘Let’s Go Brandon!’ sign in Grand Park at a ‘March for Freedom’ rally demonstrating against the L.A. City Council’s COVID-19 vaccine mandate for city employees and contractors on November 8, 2021, in Los Angeles, California. (Photo by Mario Tama/Getty Images)

The letter from the property management company did not convince Hyde to scale back his Christmas lights. Instead, Hyde revealed a larger display that reads “#FJB” surrounded by Christmas lights at a campaign event at his home on Wednesday. The new display is an acronym for “f*ck Joe Biden.”

“When you poke the bear, there are outcomes and circumstances,” Hyde said.