Republican senators blasted President Joe Biden after a press conference on Wednesday where he suggested the U.S. and European allies would do little if Russia conducted a “minor incursion” into Ukraine.

Asked about whether there was U.S. and European unity on a response if Moscow invaded Ukraine, Biden suggested it would depend on if it was a “minor incursion” or something more. He said:

… I think what you’re going to see is that Russia will be held accountable if it invades, and it depends on what it does. It’s one thing if it’s a minor incursion and then we end up having a fight about what to do and not do, etc. But if they actually do what they’re capable of doing with the force amassed on the border, it is going to be a disaster for Russia if they further invade Ukraine, and that our allies and partners are ready to impose severe cost and significant harm on Russia and the Russian economy.

He also added that if Russia invaded, it would “prevail over time,” and that it had “overwhelming superiority” over Ukraine:

The cost of going into Ukraine in terms of physical loss of life for the Russians, they will be able to prevail over time, but it’s going to be heavy. It’s going to be real. It’s going to be consequential. In addition to that, Putin has, you know, has a stark choice, either de-escalation or diplomacy, a confrontation of the consequences. …

Militarily, they have overwhelming superiority and on — as it relates to Ukraine. But they’ll pay a stiff price immediately near-term, medium term, and long term if they do it. 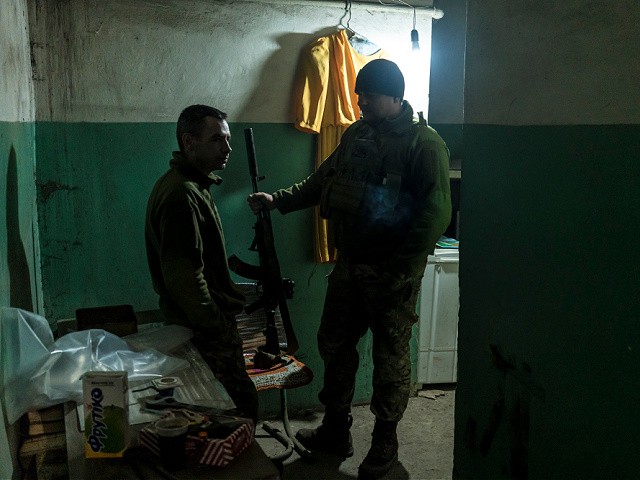 Ukrainian soldiers in a building on the front line on December 8, 2021, in Marinka, Ukraine. A build-up of Russian troops along the border with Ukraine has heightened worries that Russia intends to invade the Donbas region, most of which is held by separatists after a 7-year-long war with the Ukrainian government. (Photo by Brendan Hoffman/Getty Images)

The remarks were widely seen as undercutting U.S. diplomacy that has tried to stave off any Russian incursion into Ukraine — “minor” or not. For weeks, numerous U.S. diplomats have engaged in a flurry of talks with their European counterparts, and Secretary of State Antony Blinken is due to speak to the Russian foreign minister on Friday.

Biden also indicated that the U.S. could work with Russia on whether Ukraine would be able to join NATO — something U.S. diplomats have insisted was not negotiable.

One Ukrainian official who I’ve been in close contact with while this marathon press conference was underway said that he was, I’m quoting here, “shocked” that President Biden would give a green light to Vladimir Putin in this way, that the U.S. president would distinguish between an incursion and an invasion, and then suggest that a minor incursion would elicit a lesser response than a more full invasion. The big concern, of course, which is what he was alluding to, is that it gives Putin — and this is another quote — it “gives the green light to Putin to enter Ukraine at his pleasure.” And that’s not just one Ukrainian official. Other Ukrainian officials have responded in a similar way. Kiev, in the words of another, is ‘stunned’ by what President Biden had to say.

Reactions from Republican senators ranged from disgust to shock.

Sen. Ted Cruz (R-TX), whose bill to punish Putin with sanctions failed due to Democrat opposition, said Biden’s answers on Ukraine were “incoherent and catastrophic.”

“He said there’s disunity among our allies, but then threatened Putin with crushing action that our allies have already said they’ll never agree to. Most worryingly, he defined down what counts as an ‘invasion’ and called into question whether we’d forcefully respond, which will be read in far too many places as greenlighting an invasion,” he said.

“Throughout his remarks he downplayed the extent of the West’s commitment to our Ukrainian allies. Congress must demand and pass immediate sanctions on Nord Stream 2, which is the only action that has a chance of changing Putin’s decision calculus,” he said.

Biden is giving Putin the green light to invade Ukraine.

Sen. Jim Inhofe (R-OK), the ranking member of the Senate Armed Services Committee, tweeted that he was “very concerned by the weak, incoherent message we just heard from @POTUS on Ukraine.”

“This administration must be clear that ANY Putin move into Ukraine is unacceptable, and we should do more to impose costs on him,” he said.

I am very concerned by the weak, incoherent message we just heard from @POTUS on Ukraine.

This administration must be clear that ANY Putin move into Ukraine is unacceptable, and we should do more to impose costs on him. https://t.co/GqCPlNrg4o

Sen. Rob Portman (R-OH), a centrist, tweeted, “I am deeply troubled by @POTUS’ comment insinuating a Russian invasion may just be a ‘minor incursion.’ This is the wrong way to view this threat.”

I am deeply troubled by @POTUS' comment insinuating that a Russian invasion may just be “a minor incursion.”

This is the wrong way to view this threat.

Any Russian military incursion into Ukraine should be viewed as a major one that could likely destabilize Ukraine and Europe.

“He would be better off not speaking,” he tweeted. “People in #Ukraine have to be stunned by what he just said. I’m stunned by it too.”

On Ukraine, President Biden's statements are unnerving.  He would be better off not speaking.

People in #Ukraine have to be stunned by what he just said.

I'm stunned by it too. pic.twitter.com/QBZrB94EJB

Sen. Joni Ernst (R-IA) tweeted: “In case anyone was wondering why negotiations with Putin failed…” with a video of Biden’s remarks.

In case anyone was wondering why negotiations with Putin failed… https://t.co/BcW4GbU55b

Meanwhile, Democrats avoided commenting on Biden’s remarks. Some sought to reassure Ukraine in other ways.

Economic sanctions are one of the most effective tools we have to deter Putin from invading Ukraine. I’m proud to lead a bill w/ @SenatorMenendez that provides a comprehensive response to impose tough sanctions on the Kremlin if it further invades Ukraine. https://t.co/60CmBFIASg