Nicholas, a demonstrator supporting the Freedom Convoy in Ottawa, ON, told Breitbart News on Saturday that “corporate media” present an “alternative reality” of protesters in the nation’s capital opposing ongoing government decrees marketed as health as safety measures related to COVID-19.

“The reason I’m out here is because I see a lot of the stuff on social media, and then we see obviously an alternative reality on the corporate media. I had to come see it for myself,” Nicholas shared while holding a Canadian flag on Parliament Hill.

He described the atmosphere of the demonstration as happy. 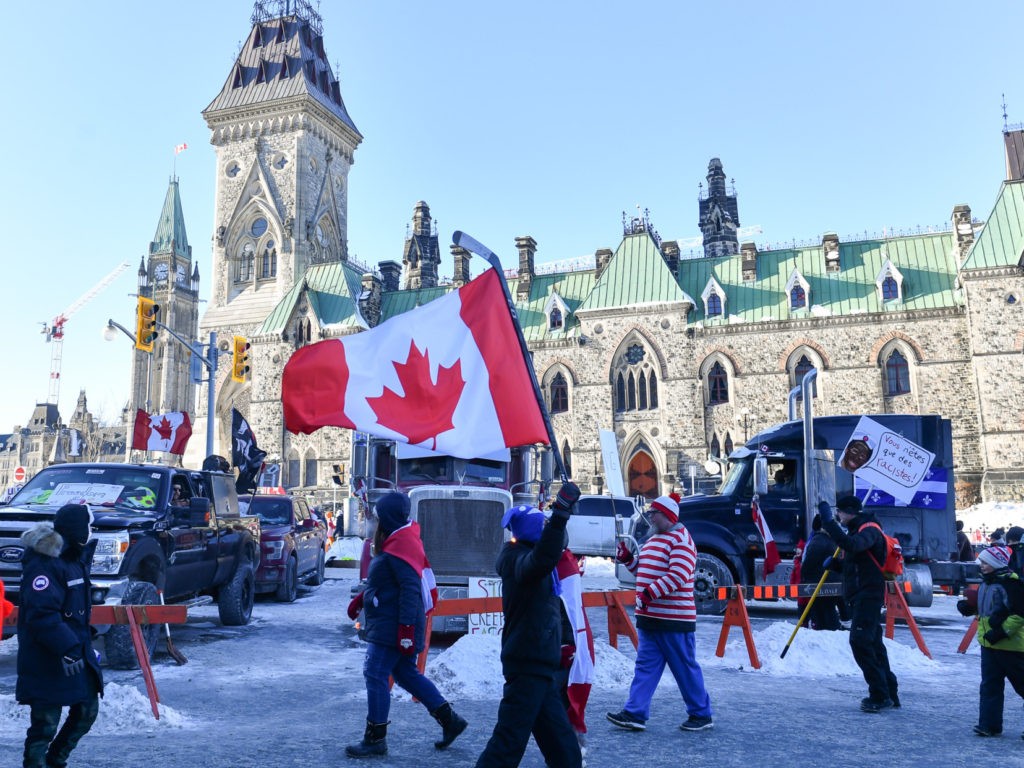 Protesters of the vaccine mandates implemented by Prime Minister Justin Trudeau walk near Parliament Hill on February 5, 2022, in Ottawa, Canada. Truckers continue their rally over the weekend near Parliament Hill in hopes of pressuring the government to roll back COVID-19 public health regulations and mandates. (Photo by Minas Panagiotakis/Getty Images)

He said, “I don’t think it could have been anything better than what I’ve seen. It was better than what any other social media has showed me. I saw bouncy castles with kids in it. I saw hay bales. There’s hockey games going on over there. People are feeding each other. I don’t think I’ve seen a happier group of people. I’ve seen somebody walking their Chihuahua around.”

“It doesn’t look like the violent protests that people are trying to paint it to be,” he added, referring to news media warnings of the protesters becoming violent. Prime Minister Justin Trudeau left the prime minister’s official residence last week for an undisclosed location ahead of the Freedom Convoy’s arrival in Ottawa, claiming security concerns related to the demonstration.

Nicholas described his political perceptions of the demonstration. “This isn’t about ‘anti-vax,'” he remarked. “This is about right to choose.”

“I was born in another country,” he added, addressing allegations made by Trudeau and news media that “racism” and “white supremacy” are dominant themes animating their political detractors. He continued, “I was born in South America. I immigrated here with my family, so, I like to think that I’m far from ‘white supremacy.'”

Nicholas concluded by emphasizing the contrast between the demonstration’s reality and false characterizations of it advanced by many Canadian news media outlets.

He concluded, “Even behind us right now, there’s people singing and dancing. It’s the complete opposite of [how] media and politicians have been trying to portray it.”