Ukrainian President Volodymyr Zelensky announced on Monday that his country would free any convicted criminals “with real combat experience” to fight the ongoing full-scale invasion by Russia.

Russian leader Vladimir Putin announced a “special operation” in Ukraine last week, claiming it necessary to “de-Nazify” the country after he recognized the two regions that make up Ukraine’s Donbas – Donetsk and Luhansk – as sovereign countries. Putin has yet to clarify the contradiction between his claim that Zelensky’s administration is run by “Nazis” and the fact that Zelensky himself is Jewish and the descendant of World War II veterans who fought against Nazis – a fact Zelensky has implored the Russian public to take into account.

Prior to the official move to invade the entirety of the country, not just the Donbas that shared a border with Russia, Putin mused in a rambling public address that Ukraine has no “tradition” of being a country and that its existence was entirely a Russian fabrication. 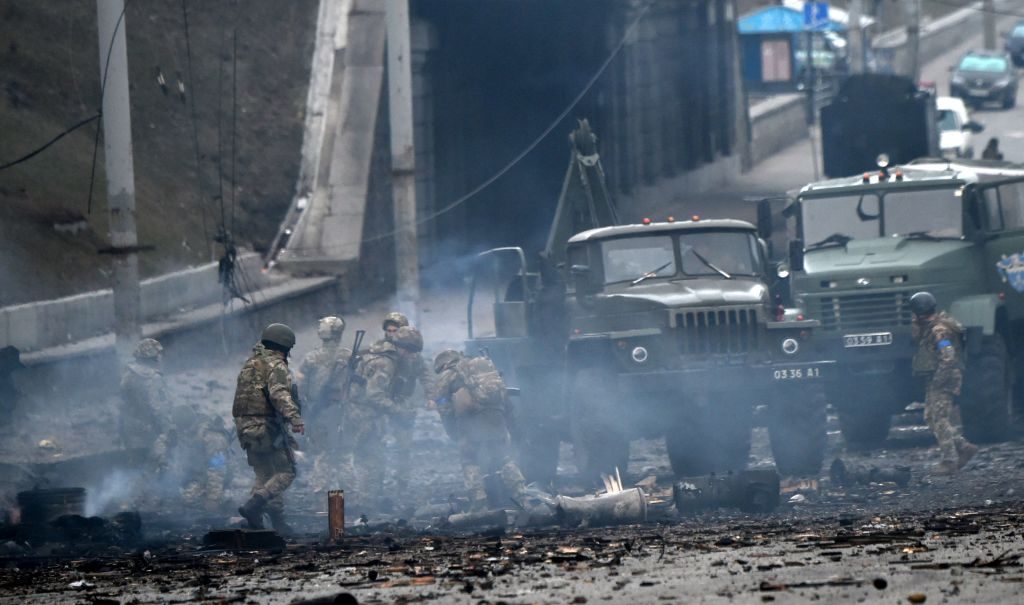 Ukrainian service members collect unexploded shells after a fighting with Russian raiding group in the Ukrainian capital of Kyiv in the morning of February 26, 2022, according to Ukrainian service personnel at the scene. (SERGEI SUPINSKY/AFP via Getty Images)

Putin made the choice to launch a full-scale invasion of Ukraine – after eight years of war in Donbas and occupation of Ukraine’s Crimean peninsula – after American President Joe Biden announced in January that Washington would not defend its ally Ukraine in the event of a “minor incursion” by Russia. Biden then proceeded to loudly predict an “imminent” invasion, tanking the Ukrainian economy and outraging Zelensky.

Zelensky’s administration reacted to the invasion by immediately legalizing civilian open carry of firearms and distributing thousands of guns, automatic rifles, and other firearms. As of Friday, Ukrainian officials claimed they had distributed 18,000 firearms to civilians. The Zelensky government has also encouraged civilians to amass Molotov cocktails in their homes to throw at Russian “invaders” and posted instructions for how to make them online.

On Monday, Zelensky announced in a national address that he had given the order to free Ukrainian prisoners “with real combat experience” and send them to fight in the “hottest” theaters of war.

“We dedicate every minute to the struggle for our state. Everyone who can join the struggle against the invaders must do so,” Zelensky said. “Therefore, the decision was made, not simple from a moral point of view, but useful in terms of our protection. Ukrainians with real combat experience will be released from custody and will be able to compensate for their guilt in the hottest spots.”

“All sanctions against some individuals who participated in the Anti-Terrorist Operation will be lifted. The key thing now is defense,” Zelensky explained.

When I ran for presidency, I said that each of us is the President. Because we are all responsible for our state. For…

“We stand firm. During this time, we have experienced as much as other nations may not have in decades,” Zelensky asserted. “In every conversation with our partners, I hear sincere respect. Ukrainians have shown the world who we are and Russia has shown what it has become.”

The president announced that, according to his government’s estimates, that over 5,000 Russian soldiers have died fighting Ukraine, urging Russian troops to disobey their orders and “leave.”

Zelensky also announced that the Ukrainian government had tallied 16 children killed and 45 injured in the five days of war.

The Ukrainian Defense Ministry announced at 6:00 a.m. local time on Monday that Russia has lost approximately 5,300 troops, nearly 1,000 armored vehicles, and 29 each of helicopters and other aircraft since the fighting began. The Russian government has not verified these figures and does not publicize death tolls on either side. The Russian Defense Ministry announced on Monday, however, a list of figures of Ukrainian material losses including “314 tanks and other armored combat vehicles, 57 multiple rocket launch systems, 121 field artillery and mortars, [and] 274 units of special military vehicles.”

Delegations from both countries are set to engage in peace talks on Monday in Belarus, a Russian ally on Ukraine’s border. According to Politico, citing Zelensky’s office, Ukraine’s delegation is being led by Defense Minister Oleksii Reznikov and will demand “an immediate ceasefire and the withdrawal of troops from Ukraine.”

Reznikov posted a message on Twitter Sunday with a photo alongside Zelensky, asserting, “its [sic] impossible to make the Kyiv [sic] lay down arms.”

85h of defence.Intimidation of 🇺 is imprudent. Its impossible to break our defenders,moreover its impossible to make the Kyiv lay down arms.The times are difficult,but it will pass.🇺 will win.We’re already winning.Therefore, we advise the occupiers to go home. It's not too late pic.twitter.com/6NPnqOctom

Ukrainian officials confirmed that talks in Belarus had begun as of Monday morning Eastern Time (about 4:00 p.m. in Belarus).