The International Institute for Democracy and Electoral Assistance (International IDEA) issued a report on Wednesday that found democracy in retreat around the world, with twice as many nations moving toward authoritarianism as those which sought to become more democratic.

IDEA is an advocacy group based in Stockholm, Sweden, with 34 member nations represented on its board. The United States is not a member but has “official observer” status.

The stated mission of the group is “advancing democracy worldwide, as a universal human aspiration and an enabler of sustainable development, through support to the building, strengthening and safeguarding of democratic political institutions and processes at all levels.”

IDEA began publishing a Global State of Democracy Report in 2017. The 2022 edition begins with the dour observation that “democracy is under both literal and figurative assault around the world,” a trend the group correctly anticipated becoming worse during the Wuhan coronavirus pandemic.

The report pointed to disturbing developments such as the Russian invasion of Ukraine; the brutal civil wars in Ethiopia, Syria, and Yemen; the coup in Myanmar; and the viciously repressive Iranian theocracy as evidence of rising autocratic power, and also denounced the trend toward authoritarian government in “backsliding” democracies like El Salvador and Hungary.

On the other hand, the authors listed the current protests against heavy-handed coronavirus lockdowns in China, Ukraine’s stubborn resistance against the Russian invasion, the Mahsa Amini uprising in Iran, and the inability of the Myanmar coup to consolidate total power over a restless public as hopeful signs of pushback against authoritarianism. The collapse of Sri Lanka’s fabulously corrupt and incompetent socialist government could prove to be another reason for hope, or perhaps for deeper pessimism, depending on what ultimately replaces it. 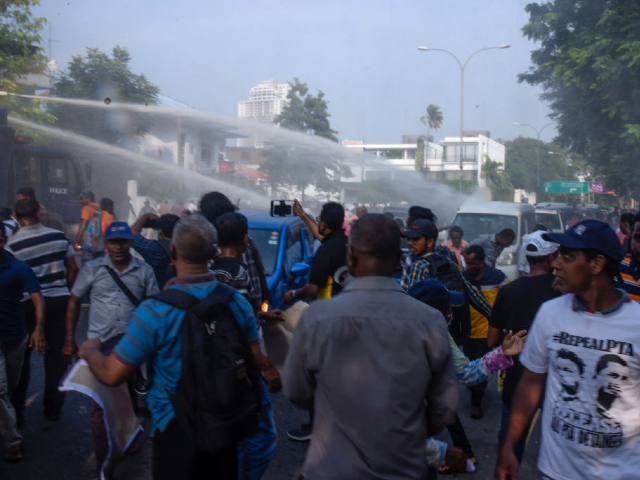 IDEA’s thesis was that all of the nations marching or backsliding into authoritarianism are making a mistake because they falsely believe anti-democratic government is the only way to address major challenges like the coronavirus pandemic:

Global opinion surveys show that this period has coincided with declining public faith in the value of democracy itself. This is immensely worrying for those who care about the fate of democracy, but sadly not surprising. The core of any social contract is that citizens consent to be governed in return for certain core goods provided by those who govern. Yet the ability of democracies around the world to provide key public goods to their citizens and to close the gap between social expectations and institutional performance is increasingly at risk. These troubling questions were present well before democracies had to address the grotesque inequities within and between countries exposed by the pandemic, and the inflation, shortages, and threats of a global economic downturn that have followed.

But contrary to what democratic pessimists may suggest, authoritarian countries and alternative systems of government have not outperformed their democratic peers. Discontent at the never-ending stream of Chinese lockdowns and the tens of thousands of draft dodgers fleeing Russia for an uncertain existence in the South Caucasus and Central Asia show that it is not just in democracies where the social contract is in urgent need of renewal.

This is a provocative argument, but the problem is that even governments and organizations ostensibly devoted to democracy have major blind spots when it comes to problems they believe are worthy of authoritarian solutions. IDEA’s report mentions climate change quite a bit, for example, and while climate change ideology is explicitly anti-democratic, it is not blasted in the report as one of the factors driving free nations to become more authoritarian.

Along similar lines, IDEA asserted that “inequality, as seen through poverty, access to services, violence, corruption, and climate change” is a major driver of “people’s demands for change.” Perhaps so, but those factors are at least as likely to push people away from democracy and economic liberty toward collectivism, socialism, Marxism, and other anti-democratic ideologies.

The “change” demanded by those who denounce various forms of “inequality” is not always – and to be brutally honest, not usually – a movement toward greater individual autonomy and limited government. IDEA’s report acknowledged this by noting that “three out of seven backsliding democracies” were in the Caribbean and South America.

Part of the problem lies in defining what “democracy” truly means. IDEA’s report often presents it simplistically as the antithesis of authoritarianism, but that is not true at all – governments with elected officials and referendums can absolutely become authoritarian, and not all of them are simply pretending to be democracies by holding sham elections, as in Russia or Iran. Having said that, authoritarian regimes clearly do have trouble restraining themselves from tinkering with ballot boxes to ensure they can never be voted out of power.

One of the most painful parts of the Western world growing past the adolescent “end of history” triumphalism at the end of the Cold War has been learning that democratic elections are most certainly not a sufficient bulwark against authoritarianism, all by themselves. IDEA’s own report offers plenty of sobering evidence that authoritarian power cannot be thwarted simply by holding relatively clean elections every few years. The true nemesis of authoritarianism is constitutionally-limited republican government, not mere “democracy.”

The largest trend identified in the IDEA report is the “moderately backsliding” democracy, a category into which the authors placed the United States. The report attributed this to “polarization, counter-majoritarianism, and the rolling-back of long established rights.”

Of course, the latter is a slam on the Dobbs decision that repealed Roe vs. Wade – but any serious student of democracy would have to admit that decision is far more democratic than the Roe regime was. People actually get to vote on abortion policy now – but that’s “anti-democratic?” Only because the authors of the report think abortion on demand is a positive good, so suppressing democracy to protect it cannot be “authoritarian” by definition.

This attitude clouds discussions of climate policy in the IDEA report as well, and inadvertently highlights one of the biggest problems with rising authoritarianism around the world: people who claim to love “democracy” giving authoritarian rule a pass, as long as such autocratic power is employed to promote causes they believe in. If you believe democracy is a paramount blessing for the human race, you have to give people a chance to dissent, to organize and to vote. Not many self-proclaimed champions of democracy in the 21st Century are truly willing to do that – not when people might vote the “wrong” way.