WASHINGTON, DC — Whether the government can force web designers to create websites celebrating gay marriage was the issue Tuesday at the Supreme Court, in the latest clash between free speech rights on one hand and a Colorado law forbidding LGBT discrimination on the other.

“Lorie Smith blends art with technology to create custom messages using words and graphics,” began Kristen Waggoner of the Alliance Defending Freedom (ADF), arguing for the First Amendment rights of a Christian web designer. “She serves all people, deciding what to create based on the message, not who requests it. But Colorado declares her speech a public accommodation and insists that she create and speak messages that violate her conscience.”

Justice Elena Kagan was very active in questioning throughout the two-and-a-half-hour argument, asking early on, “What is the speech that is required of your client that would violate the First Amendment?”

“She believes that same-sex weddings contradict Scripture and she’s announcing a concept of marriage that she believes to be false,” Waggoner explained. 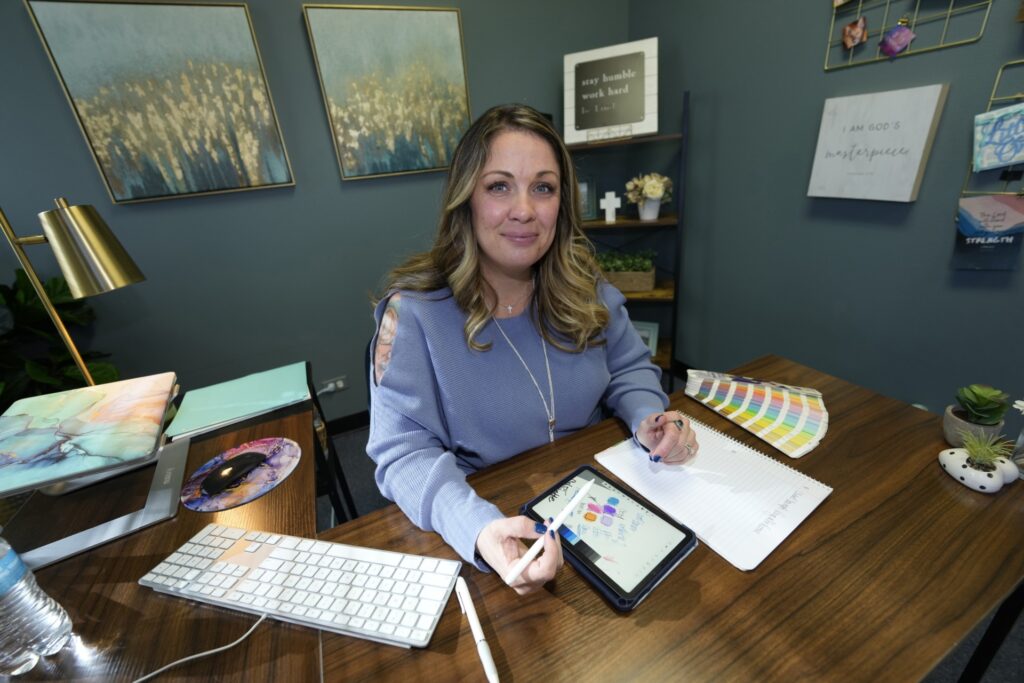 Web designer Lorie Smith is shown in her office on Monday, Nov. 7, 2022, in the southwest part of Littleton, Colo. (AP Photo/David Zalubowski)

Later illustrating the point that context matters even with generic words and common phrases, Waggoner gave the example that “‘My body, my choice’ means something different to an anti-vaxxer [versus] a pro-abortion proponent.”

Chief Justice John Roberts pressed U.S. Deputy Solicitor General Brian Fletcher for an example of when the Supreme Court ever upheld a law that had this effect. “In what other case have we upheld compelling speech, in other words, not simply restricting speech but actually compelling an individual to engage in speech contrary to her beliefs?”

Fletcher was unable to name such a case.

“I think, here, there’s a difference of opinion about whether turning down the same-sex couple simply for purposes of a marriage announcement is a turn-down based on status or message,” Justice Amy Coney Barrett said during her turn addressing Fletcher, who was arguing in support of Colorado. After giving a hypothetical example of forcing a gay couple to design a website for an Evangelical or Catholic club’s support for traditional marriage, she reasoned that “it seems to me in my hypothetical that the status of the club is inextricably intertwined with the message they want to speak.”

“There are certain rare contexts where status and conduct are inextricably intertwined, and I think the Court has rightly recognized that same-sex marriage is one of them,” Fletcher replied.

Referring to an earlier hypothetical example later in the argument, Gorsuch — who hails from Colorado, and has ruled in favor of gay rights in a major previous case — made the observation that implementing such policies has the effect of “turning away those with traditionalist views of marriage based on their religious beliefs, conservative Christians, for example.”

Justice Brett Kavanaugh appeared to hold a similar view, saying during his turn with Fletcher that he was “trying to figure out, given what you say there, how you would say this case does not involve the same thing as a writer being forced to write speeches that violate their most deeply held convictions.”

“Cultural whims may shift, but the compelled speech doctrine should not,” Waggoner began her rebuttal as the argument drew to a close. “Compelled speech crushes the speaker’s conscience, and it is the tool of authoritarianism, which is why this Court has never allowed it.”

“One need not agree with a particular belief to affirm that law-abiding people have a right to speak their conscience, including on a controversial subject like marriage,” she concluded. “And that noble principle is rooted in love of neighbor, extending the same rights to others that we want for ourselves. This right to be free from government coercion of speech is also foundational to our self-government and to the free and fearless pursuit of truth.”

A decision is expected by the end of June.

Breitbart News senior legal contributor Ken Klukowski is a lawyer who served in the White House and Justice Department.