Dallas Cowboys superstar Micah Parsons ripped the Biden Administration for not securing the release of long-imprisoned former Marine Paul Whelan in its prisoner swap with Russia for WNBA star Brittney Griner, but he quickly backtracked his comments.

On Thursday, news broke that President Joe Biden’s administration cut a deal with Russia to exchange Griner, who was convicted on drug charges by a Russian judge, for Viktor Bout, a notorious Russian arms dealer dubbed “the Merchant of Death.” As the Associated Press reports, Whelan – who has been “jailed in Russia since December 2018 on espionage charges that his family and the U.S. government has said are baseless” – was not included in the swap.

Soon after the news broke, Parsons, a linebacker who won the NFL’s Defensive Rookie of the Year award last year and is currently in the conversation for Defensive Player of the Year, ripped the Biden Administration for not bringing Whelan home.

Shortly after his initial reaction, he retweeted President Biden’s post announcing Griner’s release and declared, “We still not voting for you!” 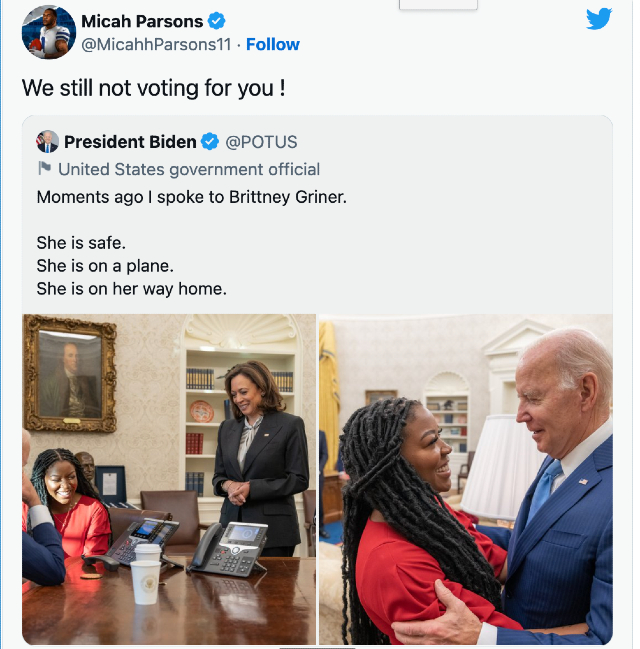 The second post went orbital as well, but the linebacker quickly deleted it.

“My last tweet was no shot at Brittney Griner,” he wrote in a subsequent tweet. “I’m super happy she’s back home as she should be. I just have family who have served and it’s crazy to me the President wouldn’t bring him home too. I’m the furthest thing from a trump supporter but I’m not a fan of Biden either.”

My last tweet was no shot at Brittney Griner. I’m super happy she’s back home as she should be. I just have family who have served and it’s crazy to me the President wouldn’t bring him home too. I’m the furthest thing from a trump supporter but I’m not a fan of Biden either.

Minutes later, he sent out another post stating that he “tweeted out of emotion” and apologized.

then the best outcome was accomplished. I pray Mr. Whelan comes home but am extremely happy for Brittney and her family. I am not too prideful to admit when I’ve made a mistake.

Whelan’s family stated that they were informed prior to the exchange being public that Paul would not be part of the deal, NBC News reported.

“That early warning meant that our family has been able to mentally prepare for what is now a public disappointment for us. And a catastrophe for Paul,” said Paul’s brother David Whelan. “I do not know if he is aware yet, although he will surely learn from Russian media.”

In 2020, Whelan was sentenced to 16 years in prison. Griner received a nine-year sentence “for possessing vape cartridges with a small quantity of cannabis oil,” the AFP noted.

Nicknamed the “Merchant of Death,” Bout is a flamboyant arms dealer in his mid-50s with Russian military training. He became a billionaire by raiding the armories of the collapsing Soviet Union in the early 90s and using old Soviet cargo planes to transport his black-market weapons to conflict zones around the world.

Bout’s criminal genius has been hailed by every international law enforcement agency that went after him. He was smart enough to mix his weapons shipments with more legitimate cargoes, posturing as a humanitarian who just wanted to sell cheap food to starving Africans. Meanwhile, he was selling guns to every bad actor from al-Qaeda and Hezbollah, to both the Taliban and its enemies in Afghanistan.