A look into a sizable online community reveals the shocking motive behind some men’s desire to identify as women: involuntary celibacy.

“Transmaxxing” is the unnerving topic of a report from Pirate Wires, which exposes how some men called “incels” — short for “involuntarily celibate” — may be resorting to self-destructive gender transition attempts.

Those who attempt to transition to the opposite sex come from a variety of backgrounds. Some have asserted, much to the chagrin of the Washington Post, that lesbians or masculine girls known as “tomboys” are now being encouraged to attempt to become men altogether.

Others who resort to sex transition attempts may include young teens who are distraught over the challenges of puberty and are promised that puberty blockers are entirely reversible and can simply “pause” their development.

But for some self-described male “incels,” gender transition attempts are tragically seen as a way out from their current problems. Pirate Wires encourages readers to “Imagine you’re a depressed young man in a developed country. Maybe you work long hours for low pay, maybe you’re unemployed.”

“When you were in school, you didn’t fit in with other boys; girls acted like you weren’t even there. You spend most of your free time playing video games,” and “You rarely have sex without paying for it. You consider suicide regularly,” the article compels readers to imagine.

But on top of the lack of economic, social, or romantic prospects, such men are politically homeless, the article posits, with left believing them to be women-hating incels “with latent violent tendencies” and the right considering them weak-willed, porn-addicted degenerates.

Some self-described incels who find themselves in these circumstances have decided to make a drastic, self-destructive decision to try and cease being a man altogether.

These “transmaxxers” think “gender transition can be an effective tool for escaping the misery of involuntary celibacy, social isolation, and professional mediocrity.”

The article explains that many of the men who decide to “transmaxx” believe that transitioning is:

[A] potentially revolutionary response to a world where the combination of industrialization and biomedical technologies such as in vitro fertilization and sperm donation have eroded the financial and reproductive opportunities previously available to most men.

The article, which discusses “why a community of depressed young men with nothing to lose is convinced the only way out of their misery is gender transition,” pulls from a Discord chat of “transmaxxers” and the subculture’s accompanying manifesto.

The Discord has over 1,200 different users, ranging from men who are actively attempting to transition to those who are interested in the concept. There are memes encouraging the process, with some promising that transitioning is equivalent to “basically living a sexual fantasy 24/7” or nearly unfettered access to sex.

One admin of the Discord says that “most of the incel community are against transmaxxing and incels do not participate in our spaces much,” though writings from those engaged in the process indicate that they almost unanimously have described themselves as incels. 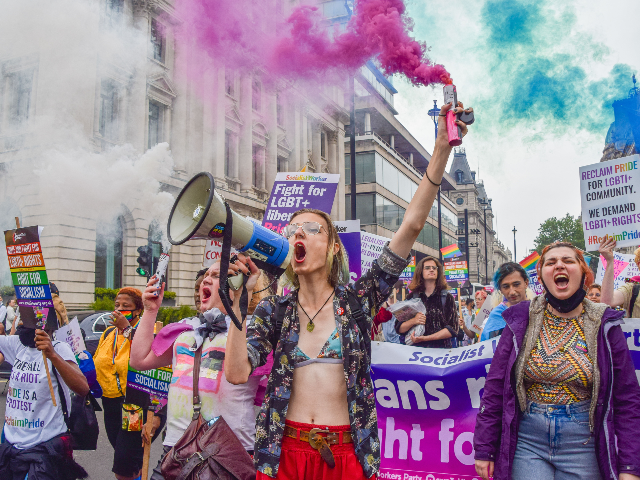 A demonstrator shouts through a megaphone and holds a smoke flare in Pall Mall during the Reclaim Pride protest. (Photo by Vuk Valcic/SOPA Images/LightRocket via Getty Images)

Meanwhile, a 73-page manifesto urges incels to consider transition attempts. It begins with a list of purported benefits of attempting to transition, numbered zero through 17. The list ranges from “being able to extract resources from males” to “cheaper car insurance.”

The manifesto includes personal, sometimes highly sexual, testimonies intermixed with references to scientific studies on the effects of hormone therapy. There is also advice on dating after a transition attempt and even on becoming a prostitute.

One section, titled “How society benefits from people transitioning,” argues that “Less incels trying to force females to waste themselves on losers is a good thing,” also remarking, “Incels transitioning to female is good for society since they will become less likely to develop or maintain problematic political beliefs or become violent, they will instead benefit from accelerated hypergamy and gynocentrism.”

It also discusses pornography use as a method by which one can be conditioned to become more comfortable with transition attempts. It recommends in detail that one consume pornography that is specifically made to feminize the men who watch it. “If you do not currently feel like living as a female you might have to work on fixing that,” the manifesto reads, while also talking about how men with a “humiliation fetish may benefit from going trans.”

These admissions seemingly, if inadvertently, discredit leftist arguments that gender dysphoria cannot be induced, successfully encouraged, or groomed into.