The popular anti-Joe Biden “Let’s Go, Brandon” chant has been denounced by the very sport from whence it came.

According to NASCAR President Steve Phelps,  the “Let’s Go, Brandon” chant has created an “unfortunate situation” that the sport will not condone.

“It’s an unfortunate situation, and I feel for Brandon, I feel for Kelli,” Phelps told Fox News on Friday.  “I think, unfortunately, it speaks to the state of where we are as a country. We do not want to associate ourselves with politics, the left or the right.” 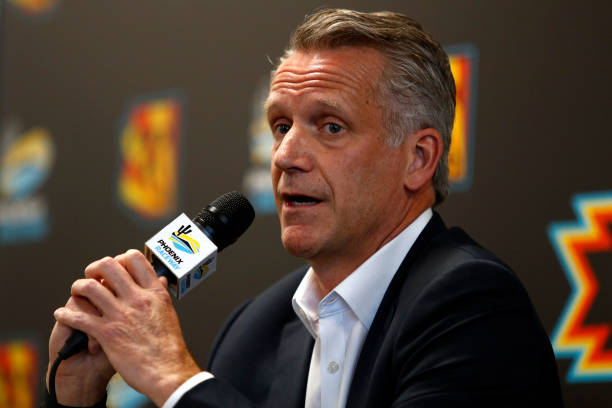 Going further, Phelps said that NASCAR will “pursue” whoever misuses the organization’s logo by associating with “Let’s Go, Brandon.”

“We will pursue whoever (is using logos) and get that stuff,” Phelps said. “That’s not OK. It’s not OK that you’re using our trademarks illegally, regardless of whether we agree with what the position is.”

The “Let’s Go, Brandon” phenomenon sparked in early October when NBC Sports reporter Kellie Stavast tried to cover up the crowd chanting “F*ck Joe Biden” when NASCAR driver Brandon Brown scored his first Xfinity Series win at the Talladega Speedway. Since then, the chant has become a fun, vulgar-free way of expressing disdain for the 46th President of the United States.

Phelps also expressed displeasure over the chant originating with NASCAR.

“Do we like the fact that it kind of started with NASCAR and then is gaining ground out elsewhere? No, we’re not happy about that,” Phelps said.

Writing in the Washington Post, Ashley Parker and Carissa Wolf lamented how Joe Biden’s critics have resorted to hurling “increasingly vulgar taunts” at the president.

It’s clear that after nine months in office, Biden — or at least what he represents — is increasingly becoming an object of hatred to many Trump supporters. The vitriol partly reflects Trump’s own repeated baseless claims that Biden is a usurper, depriving him of his rightful claim to the presidency, and partly stems from Biden actions that Republicans deplore, from his spending plans to his immigration policies.

Yet the anger also demonstrates how a political party or cause often needs an enemy, a target of vilification that can unite its adherents — and, in this case, one refracted through the harshness, norm-breaking and vulgarity of the Trump era.

The Biden White House has denied hearing the chant, claiming it stemmed from right-wing extremists on 8chan.

“I had never heard of that chant until you explained it to me,” White House spokesman Andrew Bates told WaPo. “I guess I’m not spending enough time on 8chan or whatever.”

Regardless of what President Biden or the left thinks about the chant, “Let’s Go, Brandon” has been fully adopted by the right, with Florida Gov. Ron DeSantis recently referring to the Biden administration as the “Brandon administration.”