The National Fraternal Order of Police blasted the National Football League after reports showed that the league has donated hundreds of thousands of dollars to anti-police groups that advocate for the end of American police departments.

A recent review of the NFL’s “Inspire Change” social justice spending by Fox News found that the leagues have given hundreds of thousands to at least three anti-cop groups. In addition, the review shows that the NFL is proudly supporting the Vera Institute of Justice, the Oregon Justice Resource Center, and the Community Justice Exchange, all of which support defunding and abolishing the police.

After the news broke, the National President of the Fraternal Order of Police, Patrick Yoes, condemned the NFL for its activist spending.

“I find it incredibly ironic that NFL teams travel and play every week under the protection of local law enforcement,” Yoes wrote in a Friday tweet. 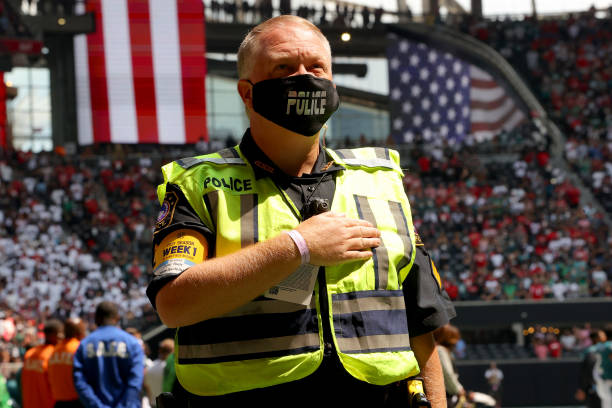 ATLANTA, GEORGIA – SEPTEMBER 12: A police officer stands inside Mercedes-Benz Stadium during the national anthem prior to the game between the Atlanta Falcons and the Philadelphia Eagles on September 12, 2021 in Atlanta, Georgia. (Photo by Kevin C. Cox/Getty Images)

“We have officers in stadiums, parking lots, and even on the sidelines to ensure the safety of the players, team personnel, and of course, the fans,” Yoes added.

The @NFL wants to “Inspire Change” by funding groups that want to #DefundThePolice and envision a world without prisons and police. Performative displays of wokeness like this are shameful. Maybe Commissioner Goodell @nflcommish should take a timeout and reconsider this decision. pic.twitter.com/DazsoPVIPI

“The NFL pays for this security because they want their venues and attendees to be safe. Now, we learn they are sending thousands of dollars to groups whose mission is to end policing and our justice system,” he continued. “How irresponsible is this? If it weren’t such a serious issue, we would just laugh at them and go about our business. But make no mistake, this is a very serious issue.

“Our nation is experiencing a crime wave unlike any other in recent history and one of our nation’s largest sporting leagues is paying for campaigns to keep criminals and offenders on the streets?” Yoes added. “Proudly funding a group that advocates for pulling officers out of our neighborhoods and communities—maybe even—God forbid—football stadiums? Performative displays of wokeness like this are shameful. Maybe Commissioner Goodell should take a timeout and reconsider this decision.”

“Is this the kind of change the NFL wants to inspire—the false narrative that police officers and policing are bad, and that crime in our society will just end of its own accord? Would players take the field if police officers were not protecting those stadiums? Would fans risk going to games knowing that there would be no police presence? Of course not,” he said. 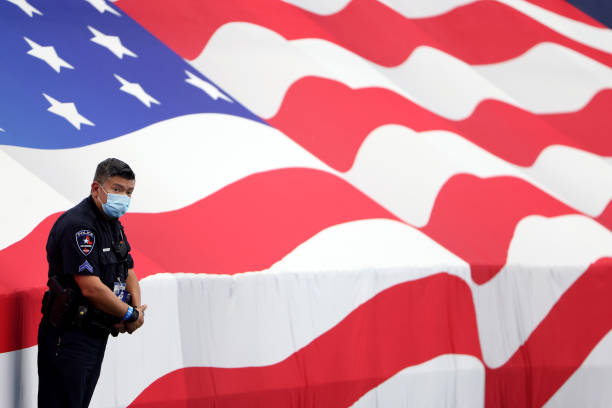 ARLINGTON, TEXAS – SEPTEMBER 20: An Arlington Police officer stands on the sidelines as the Dallas Cowboys take on the Atlanta Falcons at AT&T Stadium on September 20, 2020 in Arlington, Texas. (Photo by Tom Pennington/Getty Images)

“What is even worse is that by funding groups like this, the NFL sends a clear message that they are on the side of the offenders when instead they could shine a spotlight and provide help and support to crime victims and their families. That’s the kind of change we would find inspiring,” Yoes exclaimed.

“In fact, rather than supporting efforts to further divide police officers from the communities they protect, the NFL should focus on how to heal the wounds in these communities by collaborating with the FOP to rebuild trust and respect between police officers and the people they serve. To this end, the FOP reached out to the NFL and had several meetings to explore this kind of cooperation, but the NFL ultimately refused,” Yoes advised.

“The NFL can inspire whatever change it chooses—but that doesn’t mean they have to fund the kind of change that makes them and all of us less safe,” the FOP chief concluded. “And it certainly doesn’t mean it is morally right to fund groups who want to make America less safe while at the same time the NFL relies on the brave men and women of law enforcement to make stadiums safe places to turn monstrous profits.”