The police are kicking the hell out of some guy who happened to be next to the girl I poisoned, and he’s taking the rap for me, which I appreciate. That’s probably just as well, since I’ve set up an explosive, booby trapped the DJ’s speakers, left two people knifed in the bedroom, and alerted aggressive aliens to the party’s location.

But me? I’m just here to dance. 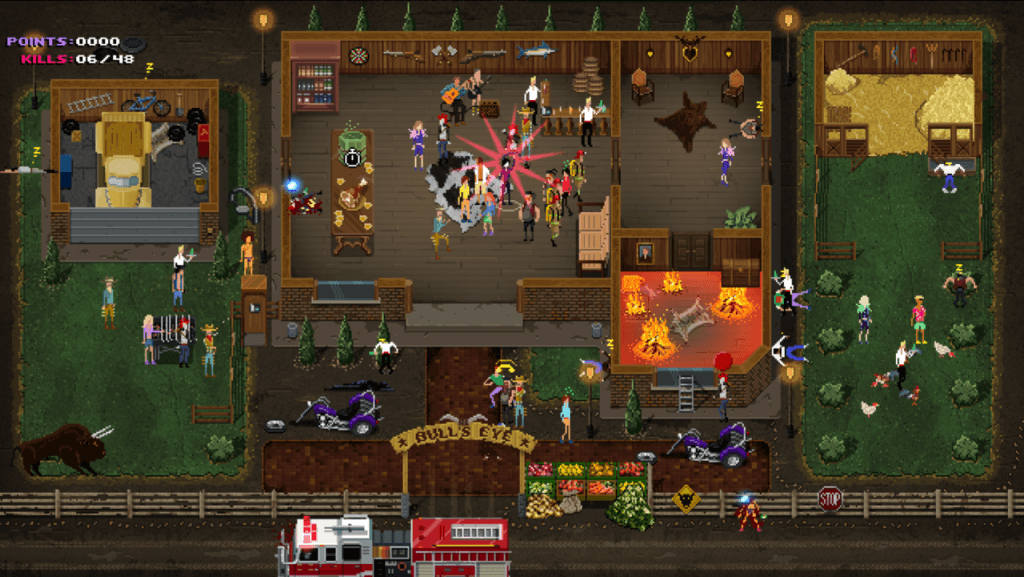 I am the life and death of this party.

Party Hard is strategy stealth murder simulator from Pinokl Games. You play as the Party Hard killer, a man driven to kill people at parties because… they’re too loud. Obviously, the plot isn’t the best part here — the gameplay is, and it’s best to not dwell on it. You’re an angry sociopath in a mask with a knife and with one mission in life: get your knife on.

Gameplay is pretty simple: kill everyone at the party and don’t get caught. You can do this via traps, events, or your trusty knife. If you’re seen or suspected of committing a murder, the police will be called, and you’ll have to run away until you escape or use an escape route, though if you use one a workman who looks suspiciously like Mario will come and board it up. Either you slay the whole party, or you’re arrested or killed, and it’s quite fun when it works. I have to admit I felt a little guilty at first playing a horror movie simulator… until I the entered the Vegas party in a full vampire costume. Screw you Count Chocula… not in my house. Also the pixel graphics aren’t exactly detailed, so the violence is more comic than shocking.

I’ll say right up front, you need a controller to effectively play. I used an Xbox 360 controller hooked up to my PC, but it likely doesn’t matter what you use as long as you use one. I found the knife kill system very difficult to pull off with a mouse and keyboard, though you may have more luck. Around half of your kills will likely involve a Quick Stab, where you dispatch a victim quickly with your knife while trying to avoid being seen. This can be fun when it’s working, making you feel like a crafty slasher sneaking around the level dispatching hipsters. But it doesn’t always work, and your slasher moves like a tank, so this part can get boring. 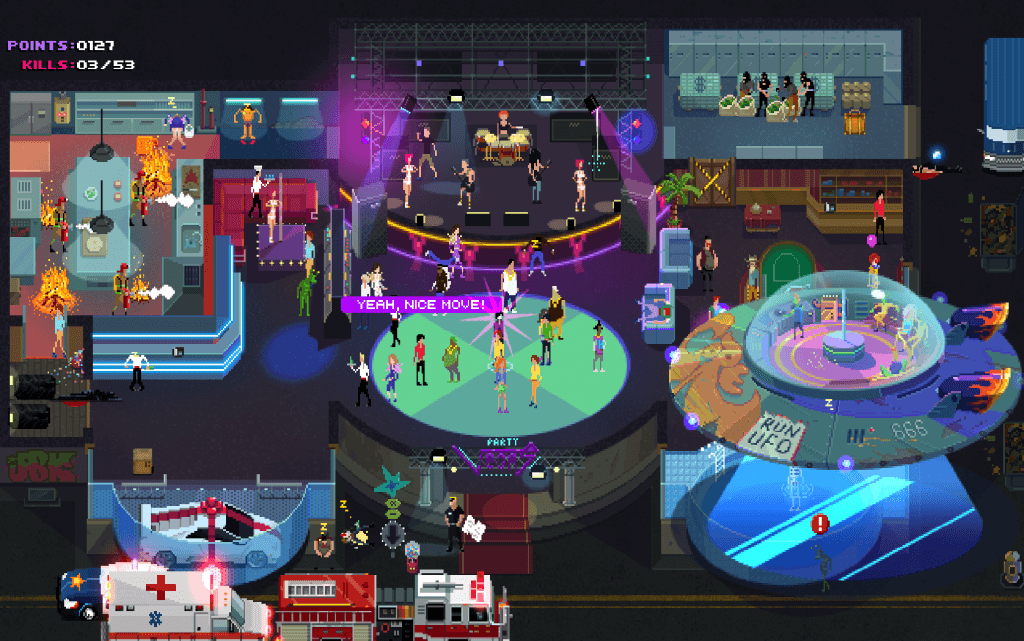 What the inside of Michael Bay’s mind looks like all. the. time.

Thankfully Party Hard employs a traps and accident system, though not as often as it should. This is where the game really shines. Sneaking around levels while you rupture steam pipes, poisoning punch bowls and rigging things to fall on people, is the most clever and enjoyable part of the game and really should be expanded by the team in future updates. You can also call in a variety of events from phones, like competing killers and mad bombers. The silliness of this I both enjoyed and at times found jarring. But even if it pulled me out of the immersion at times, if you can’t appreciate a Sharknado and rampaging zombies, you’re dead inside.

The levels are varied — from a houseboat, to Las Vegas, to a party at a sawmill, to a party bus with no phone and nowhere to run. Party Hard lovingly sends up slasher movie cliches, and the level designs lean into them, with nods to famous slasher movies and settings. Each level has traps and “accidents” specific to it, and the levels have a really fun, dark pixel art style, evocative of Newgrounds style flash games. That’s true of all of the art save for the cutscenes, frankly. Here there be dragons.

If the game has a flaw it’s the story and voice acting. The voice acting improves as the game goes on, but I can’t help but wonder if the lines couldn’t benefit from a few more reads. The script and story suffer from the same problems, with a twist you can see a mile away and writing that leans heavily on cliches in a way I’m not sure is always self aware. It’s only really cringeworthy in a few places and doesn’t hamper the immersion — any more than some of the phone call events anyway. The voice acting, cut scenes, and writing always get close enough to capable. You want them to succeed so you can appreciate some lore with your gameplay, but it sets you up for disappointment. I’m not saying Party Hard doesn’t have its moments, story wise, but don’t root too hard for it to get above solid B movie fare, or you’ll end up disappointed. 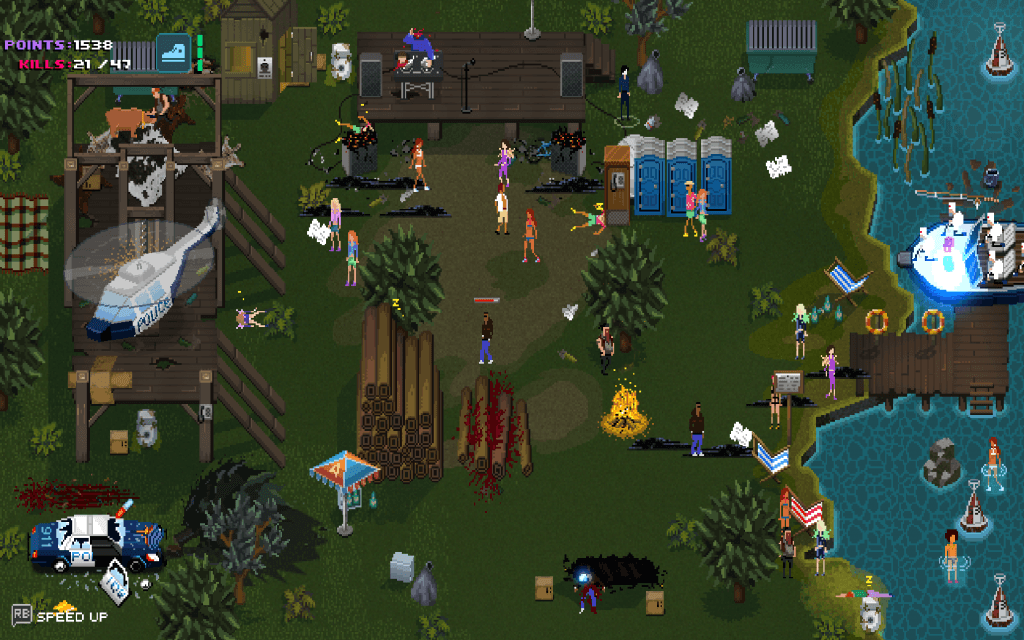 Not even sure this one is my fault. “Party at the sawmill” = bad idea in general.

Party Hard can also be frustrating to the point of feeling padded at times. Some of the levels have 50 or more people and only enough traps to kill half that, meaning the rest of the level starts to feel like a slog. You run around the level, catching anyone who breaks off from the pack, knife them, run away, and then once you’re sure you haven’t been caught you do it all over again. Once you’ve spooked the level, people will start to cluster and be on guard, and what was a merry murder spree becomes a bit of a drag. Running down 5 people is fun; 20’s a chore.

Really a few more traps in every level would fix this problem, and sometimes getting killed or busted is a blessing in disguise. You’ll replay levels a lot, but you’ll get a new trap setup and special item each time. Party Hard can have punishing difficulty at times for the impatient but does reward you with a few gimme levels — like a party bus with no way for occupants to escape or call the cops.

The emergent behavior of the various game systems can be hilarious as you can trick the police into arresting the wrong people, and levels often have events playing out parallel to your crime spree, like a bank heist or a drug deal that you can interrupt or not as you choose. Bouncers can be led away from their posts and police tricked into stepping on traps, and almost everyone can be annoyed by your magnificent dancing (complete with spotlight.) You can do this anytime you want to steal focus, move people, or just get down to the game’s soundtrack. You actually will; the game’s music is disturbingly catchy. 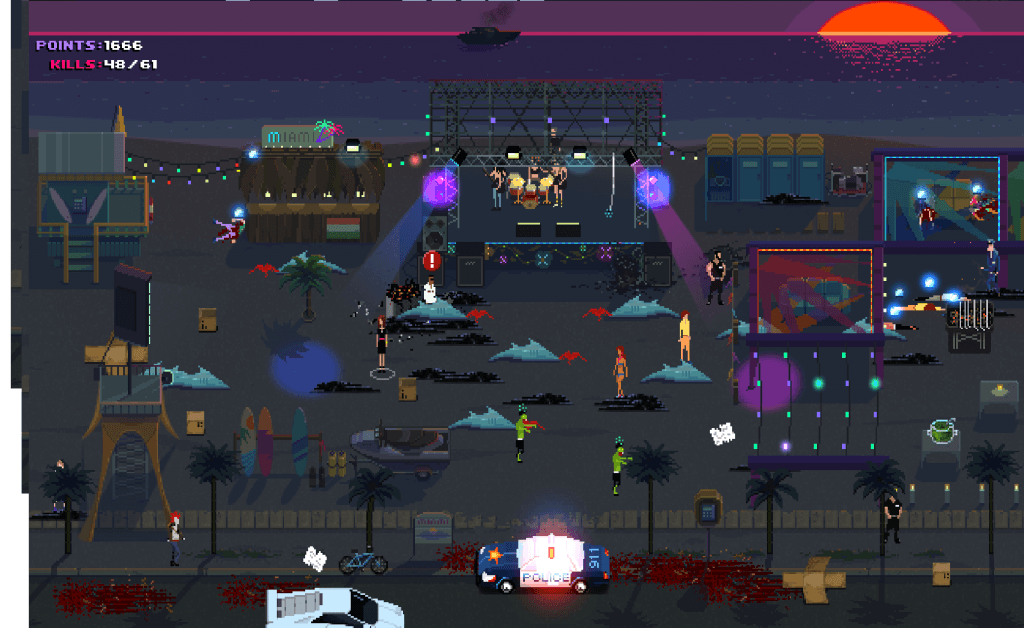 I’m such a wallflower at parties.

Party Hard is a difficult game to love, but impossible to hate. At it’s best it’s a clever mix of puzzle and stealth slasher simulator with traps, chases, and some hilariously disturbing kills. At its worst it’s a frustrating waiting simulator mixed with cringey B-movie acting. But I don’t feel like my time was poorly spent either — I had fun. So by all means I suggest you Party Hard, but wait for a sale if you’re on the fence.

Disclosure – Author received a review copy of this game.