The mere mention of Tumblr leads to exasperated groans from anyone of sound mind. The microblogging site, now owned by Yahoo!, has played host to a myriad of rabid social justice warriors and third-wave feminists for years.

Straight white males are usually the target for the vicious denizens of Tumblr. But one lesser-known Tumblr clique hunts down not men… but expensive free clothes. That’s right: Tumblr is also a haven for exhibitionist shoplifters, who have colonised the site.

Many of these self-described “lifters” claim that they’re “fighting against capitalism.” They repeat the same, stale idea perpetuated by hippies in the sixties; their lives are made miserable by the great, overwhelming force of “the man.”

Capitalism, they screech, is keeping them down. This corrupt, awful system, which is of course all the fault of “straight white males,” must be destroyed. How? By nicking fancy bras and not paying for lipsticks. I’m not making this up, I promise.

Often, the political systems that Tumblr lifters idolise are based on communism or some variant of anarchism. If you’re not sure what anarcho-communism is, just take a look at Russell Brand; he’s pretty much the personification of it.

Stealing bread in the USSR wasn’t tolerated, as thieves were stealing from their comrades. Simply put, if you don’t pull your weight, you’re not a productive member of society and would probably be sent to the gulags for re-education. If the anarchist section of the left took over, the lifters would be the bitches and lackeys of those with strength and guns. 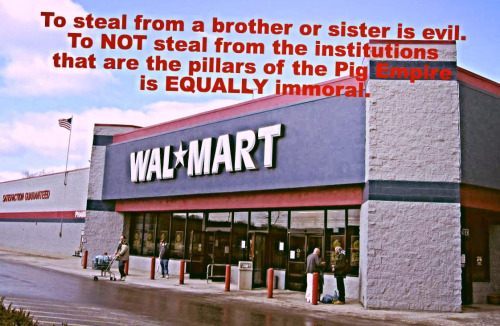 Moreover, lifters only end up screwing over decent people. Lifters claim that they can steal from multi-million dollar businesses with no consequence – that it’s a “victimless crime” – because what’s $30 worth of makeup to a billionaire?

Except there are victims here. Two, in fact: the store employee and the honest customer.

Firstly, employees are almost always held accountable for loss of inventory. If the thief isn’t caught, the employee responsible in that department is blamed, possibly losing their job as a result. Secondly, the honest customer experiences price hikes by the store that are deployed to cover the cost of stolen items, anti-shoplifting measures, and legal fees.

It’s ironic that instead of changing the system like some sort of thieving Nelson Mandela, all lifters do is hurt the little guy, keeping wages down, prices up and the mercantile classes in power. Good job, guys! 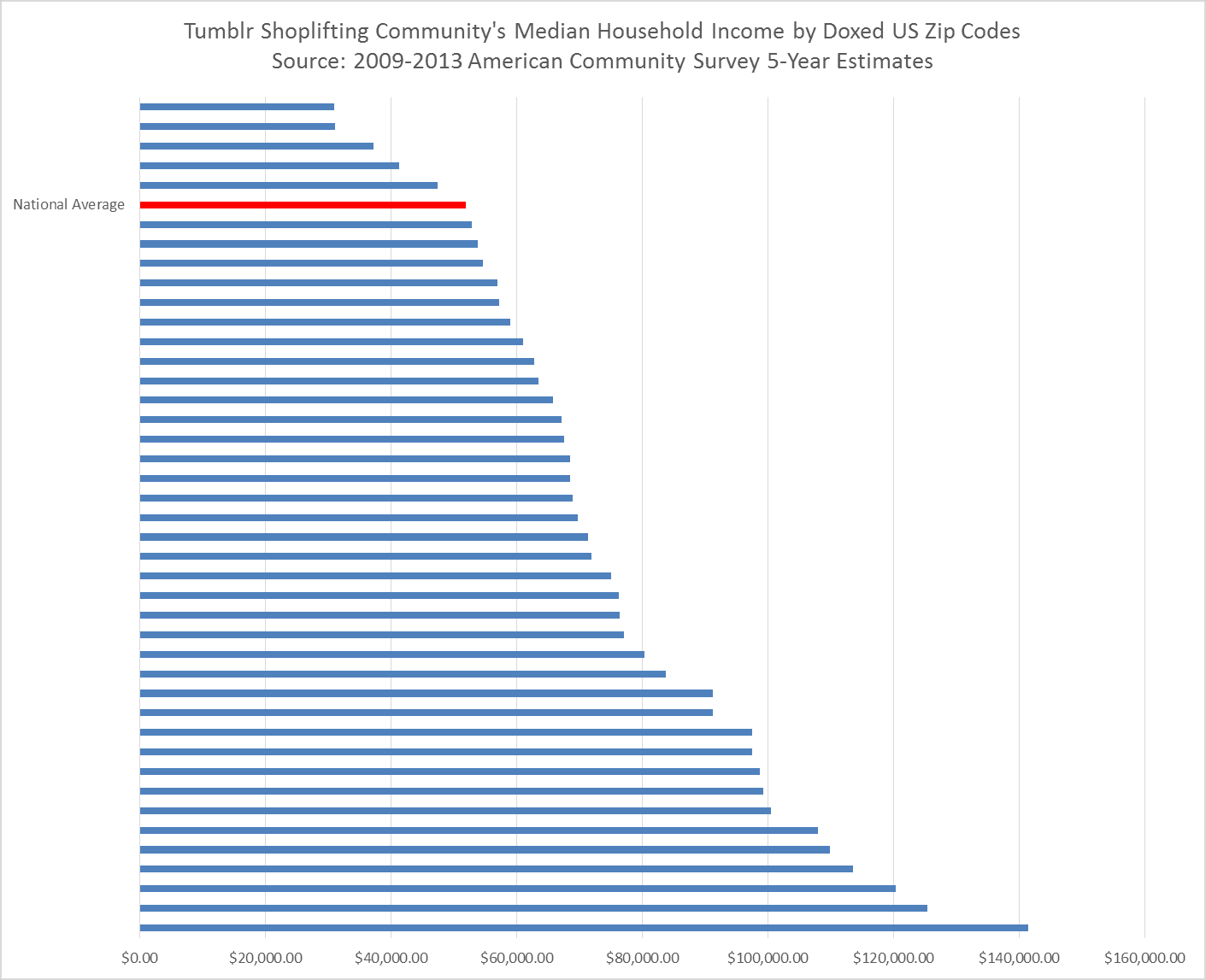 Another excuse favoured by lifters is that they’re only stealing to survive. Capitalism has made them poor, so it’s morally right to keep themselves alive by stealing. If you’re a starving child in Africa who needs to steal a bite of bread in order to not die of starvation, that’s one thing, but unless lifters are a new sub-species of human that only eat designer clothes and expensive lipstick, that’s not what’s happening here.

The fact that they have either a smartphone or a computer with which to post their “hauls,” as they call them on Tumblr, only compounds the evidence against them. They aren’t poor kids living on skid row. In fact, lifters are usually middle-class, suburban white girls. 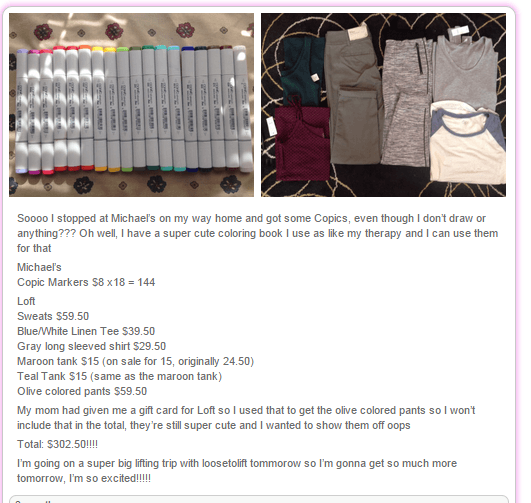 When they get caught, lifters often post angry rants on Tumblr about why they shouldn’t be punished. Some try and pass it off as “roleplay” or say they were “just joking.” Others claim that because they’re underage that they can’t be held accountable for their actions.

Bear in mind that these are the same people who whine that just because they’re only 15 that doesn’t mean that they’re not mature enough to make their own life decisions and demand to be treated like an adult. My favourite excuse is this one, where the girl in question claims that she has to shoplift because it help her beat her cocaine addiction: 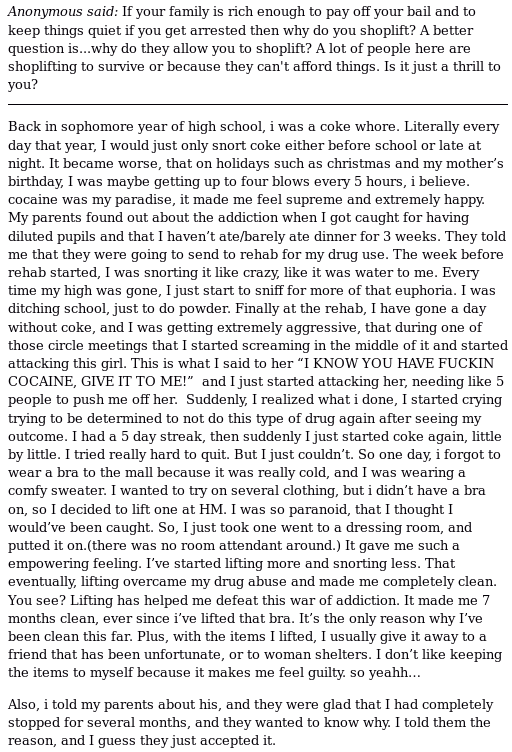 When the wider Tumblr ecosystem discovered the lifter community, many called for it to be shut down. Tumblr user tenaflyviper compiled a masterpost of around 400 lifting blogs, which many other users then proceeded to report. Given that the Tumblr community rules clearly state that “illegal behaviour” is banned on the site, lifting blogs are at least skirting on the edge of terms of service violations.

But this is Tumblr: a site which hosts blogs dedicated to calling for the death of men and white people. 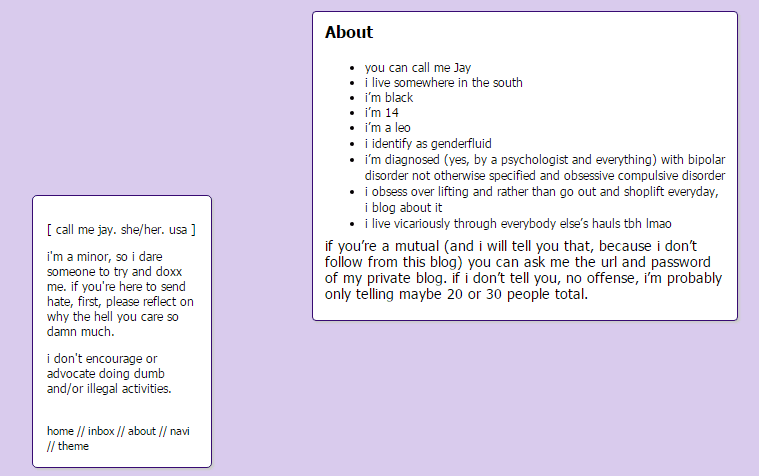 Tumblr staff have refused to delete or reprimand any lifters, citing their freedom of expression. There are two problems with this. Firstly, lifting blogs often swap tips back and forth as to how to improve their thieving skills. Under the First Amendment, incitement to commit a crime is not protected speech. 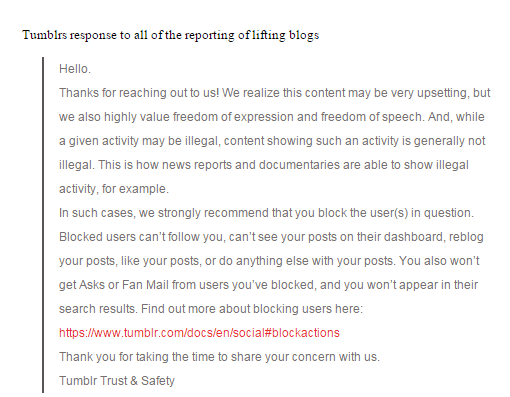 Secondly, any blog that goes against the grain of the SJW mentality is shadowbanned by Tumblr Staff. This means that their blogs don’t show up in public searches and they cannot answer messages privately, among other punishments, with CommunismKills being a notable example.

Tumblr’s “freedom of expression” excuse is paper-thin. Does Yahoo! place a higher priority on protecting the feelings of these misguided young social justice warriors than on protecting the property of innocent business owners?