My horse is swift, my torch is bright, and I’ve got a sack full of sweet, sweet gold to throw right at peasants. I may be a harsh taskmaster, but you’ll all thank me once it gets dark and the monsters come. There’s a blood moon tonight, and anybody who’s shovel-leaning needs to hop to it. In Kingdom, you are the job creator the world needs.

Kingdom is a defense game from devs Noio and Licorice, published by Raw Fury, that began its life as a Flash game, though several rounds of development and porting to the Steam platform have improved and upgraded the experience. It was made with support from the Nordic Games Program, whose mission is “to ensure access to quality Nordic computer games for children and young people.”

Kingdom was given a grant of 200,000 DKK in 2014 (before your blood pressure goes up, that’s Danish Krones, so $28,000 or so) and was released in October of this year. I suspect they’ll recoup their investment, as Kingdom is inexpensive but not cheap, and definitely worth purchasing. The question then becomes, as always, on sale or at full price. 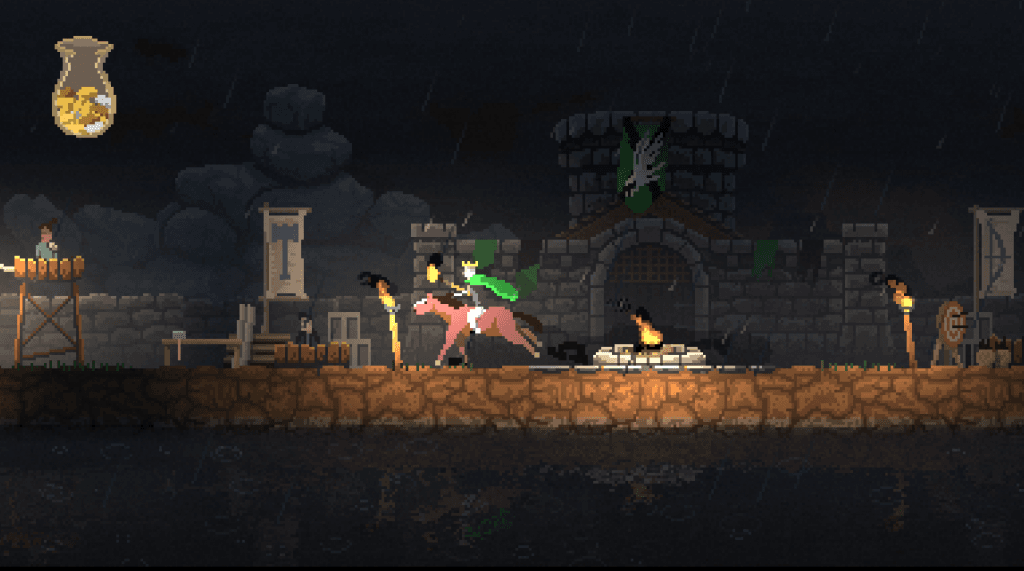 In Kingdom you play as a king or queen on a horse, who uses their capital to entice dumb peasants to perform labor and fight for you, of which they do a very nearly admirable job. Every day you’ll recruit and equip peasants (though you cannot directly give them instructions) order construction, and at times seek the assistance of strange relics by literally throwing money at your problems. Your peasants hunt, eventually farm, build, and generally live in harmony, delivering unto you their taxes, which you in turn throw at yet more peasants to perform labor for you.

Then the night comes.

At night, masked creatures attack your battlements, steal your peasant’s equipment, and if possible, your crown — though when decrowned you do have a pretty awesome bullet-timey chance to recapture it. Thankfully you’ve got archers, knights, catapults, and walls to defend your precious human capital and noble leader from the angry trolls who come out at night, demanding all his awesome treasure.

It’s almost enough… until a blood moon rises every fifth night and kicks things up to eleven — you’ll want to build redundant defenses for when the little sons of bitches start bum rushing you, because you’re going to lose some walls. Once you learn the pattern, preparing for blood moons is easy, but the first one is probably going to terrify you. 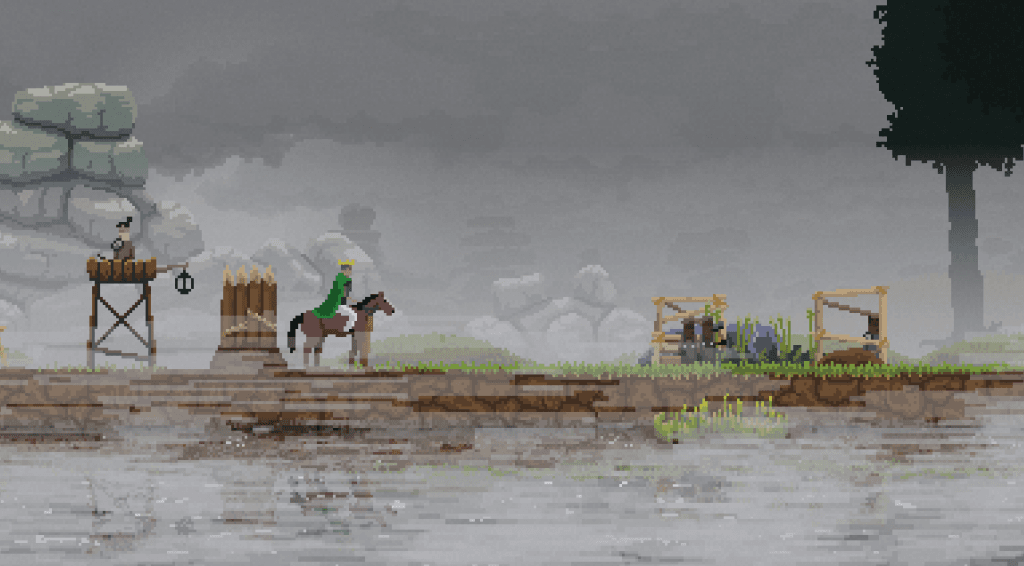 “Look at this horse I have. Jealous?”

I’d recommend playing Kingdom with a controller — it does allow mouse and keyboard play, but the control scheme felt clunky to me. With an Xbox 360 controller, it’s a whole new game immediately — controls make sense, have the right feel, and you start to feel like you’ve improved every run. However, speaking of runs, there’s not a lot of difference from one run to the next — there are a few objects, chests, villages, and other things scattered between portals, but the lack of different objects and randomness makes it feel thin.

It’s a good game — I certainly didn’t feel like working when I was playing Kingdom, but I didn’t seek it out the way I’ve played other games that I’ve bought and reviewed. I feel like I want to return to Kingdom in my non-work playtime, but not in the same way I play other titles — it just doesn’t have the depth yet. Also, your capitalist overlord moves slowly in a way that borders on stifling the fun — for example, running your horse feels glorious, but then it hobbles your speed for far too long, like a punishment for having fun.

Is Kingdom fun? Yes it it — at its best it’s so much fun (in short bursts) that it forces me to nitpick the faults that are stopping it from being one of my favorites (and in regular rotation on my playlist.) The curse of Kingdom is that every time it shines, that light illuminates an immersion breaking shortcoming or unpolished bit. I want Kingdom to do more — if not more story or objectives, then maybe a few more types of peasants? More building options? I’m not quite sure, really — probably a little bit of everything. 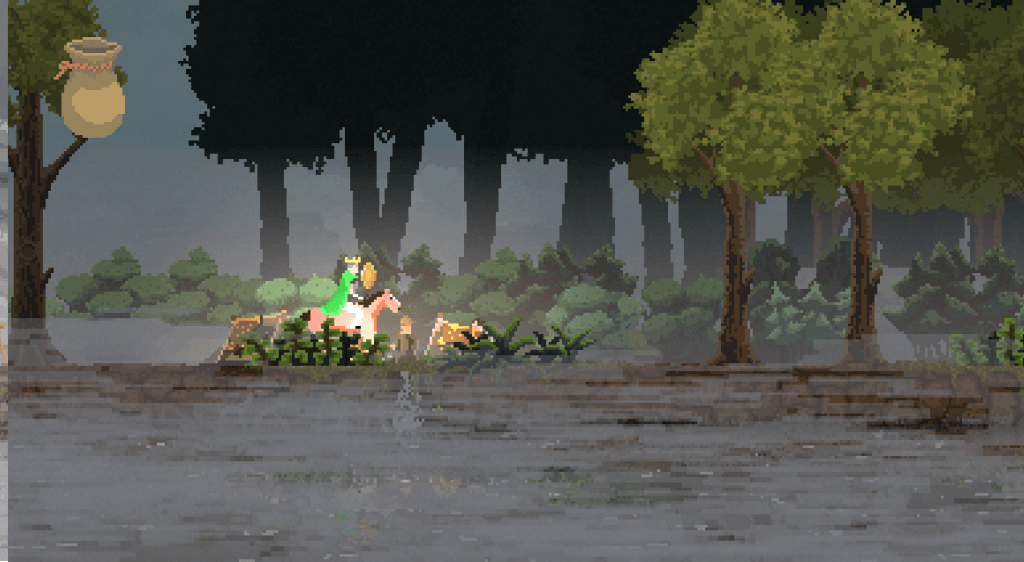 “Here is a dollar. YOUR LABOR BELONGS TO ME NOW.”

The developers have been releasing updates, and I give the game a play every time — improvements have been slow and steady since launch. But my workmen still have to stop working outside the walls when the sun goes down — that can be genuinely frustrating. That being said, these are nitpicks at the price point.

The graphics and sound are pixelated and chiptune-like but polished in their retro style and really are quite nice — I expect this to be a darling of the “games as art” crowd, and rightfully so I think. The parallax scrolling backgrounds, the weather effects, the way firelight and torchlight is handled — it’s all very atmospheric. The deer are quite nice too, before I herd the entire galloping group of them into my hunters for venison. I won’t dwell here because you can see even in the trailer that the game oozes atmosphere, whatever one makes of that. And for what I learned about it, I found the world interesting, though again, not much yet.

Kingdom is a tough game to review because the style, the graphics, and the music blend to give an amazing experience —  the package is really elegant for what it is. But ultimately Kingdom isn’t just an experience, or art — it’s a game and a consumer product, and I have to judge it as such as well. In both those areas it’s lacking, but just barely. For what it is, an improved (albeit gloriously) flash game, the price is a bit steep. So I’m going to give Kingdom a recommendation of “buy on sale” with a caveat: as of writing this review, Kingdom is on build 1.03. If after reading this it’s a later build than that, and they’ve added a bit more, then you’re probably safe to buy it at full price.

Kingdom is a crown missing one or two jewels, but if the developer ads them, it’ll become a real steal.