Here is a set of responses Shaun King just sent me after I asked why, following our report today, he was deleting thousands of tweets from his social media profile.

Shaun King, readers will recall, is a salaried employee of the New York Daily News, where he is employed as “senior justice writer.” In the email, he claims:

Presented without further comment — because I am currently struggling to form words. Except to note that King’s latest strategy of responding in the third person, making vague allusions to an “administrative team” who apparently helps him out with his email, is almost as funny as his claim that people from 150 different countries are currently logged in to his Twitter account manually deleting every tweet he has ever sent…

We are preparing a story for publication about your extraordinary tweet deletion spree.

– Can you confirm that you are mass-deleting tweets?

Tens of thousands of people all over the world deleted just 2-3 tweets a piece over the past few days.

– Are you using an automated tool or is your “administrative team” achieving this feat manually?

It’s all manual. We gave out Shaun’s Twitter password to the volunteers and asked them to all do it by the end of the day today. They were from 150 countries combined.

– Why are you deleting your tweets? Is it because you were embarrassed about your past statements on firearms coming to light?

When Shaun realized you were strangely obsessed with him, he had no idea you’d comb through his tweets. Once it got really creepy for Shaun and his family that you seemed to love and hate, worship and despise him, Shaun’s admin team decided that you were too dangerous. Legal counsel at several British media companies told us that they thought you had actual psychological challenges/disorders.

– Would you like to expand for the benefit of our readers on your views that guns are “phallic” symbols? Did you find wielding a loaded handgun, as described in your 2008, 2009, 2012 and 2013 tweets, sexually gratifying?

Phallic symbols are all throughout society. Shaun believes that white supremacy drives NRA gun policies in this country. Furthermore, white supremacy is actually fear masked as superiority. Racial symbolism is present throughout the world, be it in depicting Jesus as an effeminate European, a firearm, the game of pool, etc.

– Can you explain the changing claims you make regarding your gun ownership over the years? The numbers of weapons you possess seems to fluctuate as wildly and unexpectedly as the number of children you claim to have.

Shaun currently has armed guards that travel with him and his family and provide protection for his home at night.

It’s extremely creepy that you are obsessed with how many kids Shaun and his wife have. This is a willful lie on your part and Shaun has addressed that here: https://medium.com/@ShaunKing/shaun-king-did-not-lie-about-how-many-kids-he-has-ce9bed2f960f#.k3ubstgik

Is it that you want kids but know that you would be such a terrible father that you choose instead to be obsessed with Shaun’s kids?

As a journalist, you live for days like this. 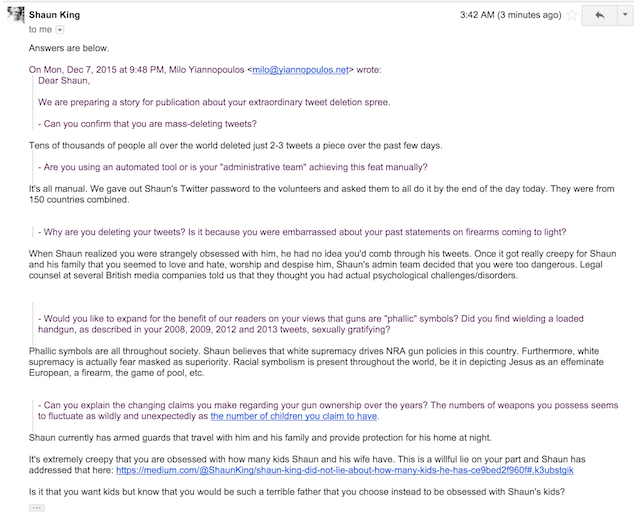