Facebook has issued libertarian Canadian commentator Lauren Southern with a 30-day suspension after she criticised the social network for banning the administrator of a right-wing Facebook page.

Only a few days after the widely publicised meeting of “top conservatives” with Mark Zuckerberg to address censorship of conservative media on Facebook, it seems the site is up to its old tricks of silencing conservatives and right-wingers.

The admin of Disdain for Plebs, a pro-Trump, alt-right Facebook page, was banned for arguing that Trump was not anti-Muslim, but anti-ISIS, and that his proposed ban on Muslims was not due to innate racism, but because “Homeland Security cannot differentiate which Muslim is radical wanting to cause harm and which is a harmless refugee.” 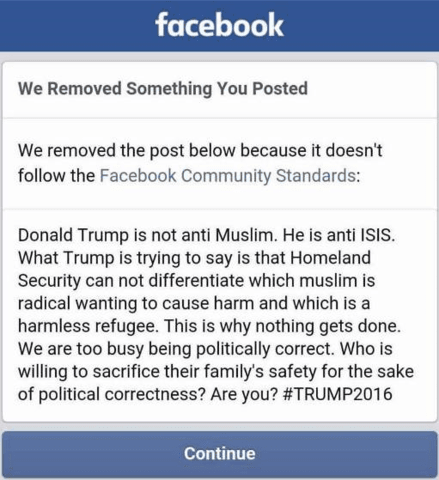 The admin, who wishes to remain anonymous, said exclusively to Breitbart News that “being banned for stating unfortunate facts is typical of social media these days. Conservatives understand they are forced to stay quiet on controversial topics that need to be addressed, or else be completely exiled from the public eye. Years of hard work and determination can be, and has been, eradicated from people, under the moderation of politically correct censorship masquerading as manners.”

Ms. Southern then posted on Facebook that she thought it was “utterly insane” that the ban was administered for something as simple as that. Facebook then proceeded to delete the post and ban her too.

Facebook is a private company, which means that from a legal standpoint they are free to do what they like. However if they intend to continue censoring conservative viewpoints they should at least be honest about it. Come out and say it Zuckerberg – “Our platform that influences billions of people is being used to propagandize left-wing viewpoints.”

Whilst the mainstream media and so-called “cuckservatives” say that Facebook has admitted its wrongdoings and turned back towards political impartiality, the latest actions of the social network appear to challenge that narrative.

Southern took to Twitter to swipe at Glenn Beck, who according to Daily Caller editor-in-chief Tucker Carlson spent much of Wednesday’s meeting “sucking up” to Mark Zuckerberg. In the wake of the meeting, Beck spent much of his time defending Facebook and attacking other conservatives.

Oi @glennbeck can I get some help over here? pic.twitter.com/3lQ1iJXkDO

Followers of Glenn Beck and the others who bowed down to the almighty Zuckerberg need to come to their senses; Facebook is not your friend.

Lauren Southern reports that Facebook has lifted her ban.

Facebook in damage control just reuploaded my posts and unbanned me. No notifications about it.

Jack Hadfield is a student at Warwick University and a regular contributor to Breitbart Tech. You can follow him on Twitter here: @ToryBastard_.