On June 18th, a man attempted to grab a police officer’s gun at Donald Trump’s Las Vegas rally and assassinate the presidential contender. Now, anti-Trump protesters are showing their support for the would-be assassin on Twitter.

This tweet, objectively showcasing the man who was arrested, has pulled in the support of hundreds of people who believe he was in the right for attempting to kill presumptive Republican nominee Donald J. Trump.

This man tried to grab a police officer's gun to assassinate Donald Trump at a rally pic.twitter.com/OXdOayN3XL

A variety of replies show the true colors of Trump’s political opposition, including statements like, “Should we start a GoFundMe page for his bail?” with 730 retweets and counting.

should we start a GOFUND page for his bail?

Another Twitter user had this to say: “I think this is the second time someone’s tried at a Trump rally. Hopefully the third time’s a charm *fingers crossed*.”

A handful of the many other replies generally say things like “free him” or “bail him out,” and so on.

A popular Vine star named “Dope Island” weighed in on the matter. This was broadcasted to his 110,000 followers: 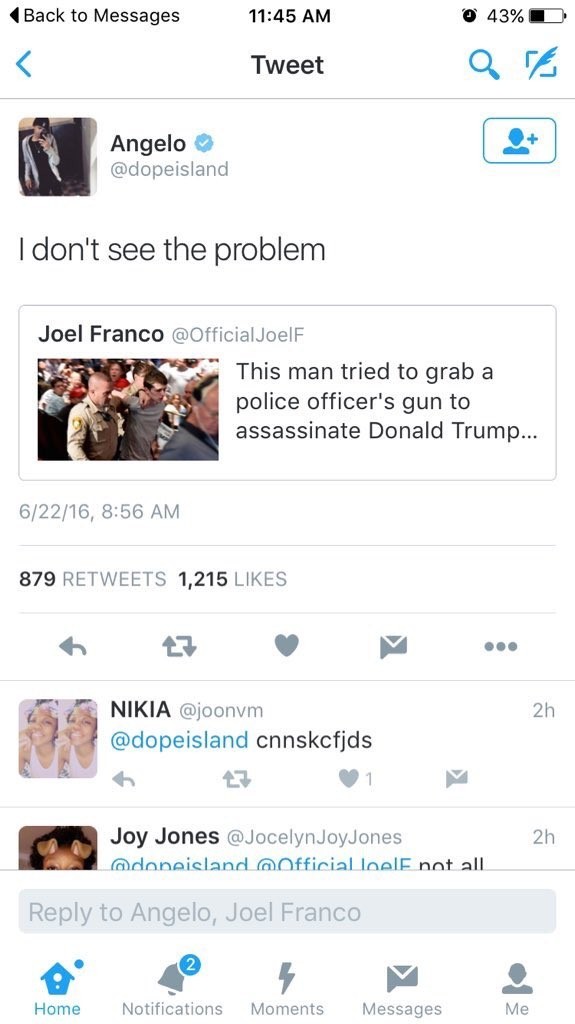 Shortly after being called out by Twitter user Baked Alaska (@bakedalaska) and this reporter, Dope Island deleted every single tweet and reply about the topic.

At first, it may not seem like these tweets hold much weight, but they are heavily symbolic of the violence and intolerance the left has turned to in response to Donald Trump. Tweets like these are a representation of the demographics brought to light during this year’s election cycle.

But in addition to this tweet’s commotion, a Twitter search for key phrases like “guy who tried to kill Trump” or “kill Trump” gives us these back.

Too bad the guy who tried to kill Trump didn't succeed

This is just a small handful, the search query pulls thousands of tweets back.

If they don’t agree with you, you don’t deserve to live.