Breitbart Tech recently had the opportunity to speak with the creator of an incredible shrine to our fallen hero, Harambe.

Tony Oritz, a self-described “Hispanic Trump supporter” from Dallas, Texas, told Breitbart Tech in an exclusive interview the incredibly heart-warming story of how he created the shrine, along with answering who he thinks Harambe would have supported in the upcoming US Presidential election and why.

Before we start this interview, could you please tell our readers a little bit about yourself.

I’m Tony Ortiz, I’m a male Hispanic Trump supporter. I live in Dallas Texas. God bless our future president, Donald Trump. Twitter is fucked and should unban Milo. I miss you, Harambe. Oh and shout out to my lawyer-Trump bros up north who are working and studying hard to make our country great again.

So firstly, where did you get the idea to make a shrine for Harambe and how did you go about setting your idea into motion?

One of our team members, Pedro Salinas-Ruiz, pitched the idea. At first I thought the meme was kind of silly but the more I saw some memes the more I was into it. This was four days before Quakecon so we had to jump on everything quickly.

At first we were just going to do the sign. Then I had the idea to buy a giant cutout. Pedro then said we should make a shrine so I immediately ordered some LED candles. Same day I rushed over to this sign making store to have them quote the printout and the next day Pedro finalised the design of the sign and we had it made. They finished it for us the very next day.

The cutout and candles were ordered on Amazon with Prime. The sign was made locally and I made the stand from PVC pipe from a hardware store. 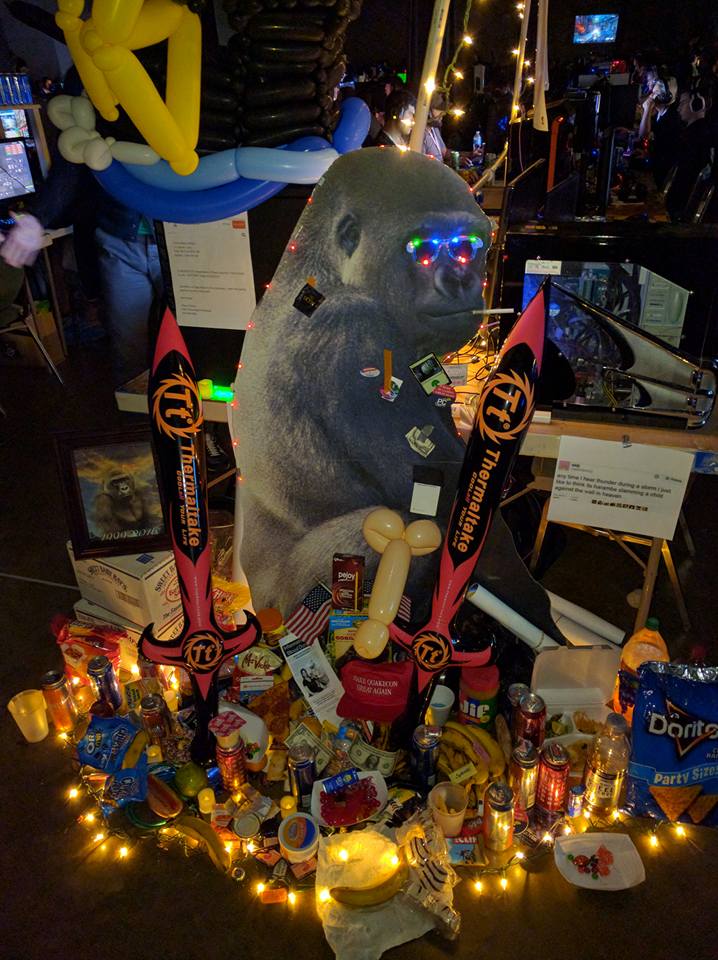 We noticed that some of the items surrounding the shrine didn’t exactly fit into the theme of The Great Silverback, but offerings of food and other small gifts, akin to how people “fed” gods in ancient times. When did people start bringing these to the shrine?

We set up the cutout when we arrived Thursday afternoon. At first it was pretty empty and people were coming by and laughing but not really doing anything but taking pictures. Then someone from our team, Laura, took one of her soda cans and put it at the shrine and it kind of escalated from there. People started leaving open containers and drinks. Friday morning is when it really took off. Someone showed up with “Gorilla Munch Cereal” and it escalated pretty quickly from there.

After that people started dropping off CD keys, and unopened food. I started to throw away the open and gross stuff to make room for the quality gifts. Then some guys came by with a bunch of bananas. That was hilarious.
Then a condom appeared, an uneaten donut, then all of a sudden people started leaving cash.

On Saturday a BBQ vendor came by, said absolutely nothing, carted in 3 giant crates of unopened BBQ sauce, and left. He didn’t even say hi, just dropped it off and left. I was cracking up! We ended up with a total of $29 in cash from donations. Then I left and came back later and noticed someone had taken a bite of the donut that had been sitting there since Friday morning on the bare ground.

Whilst it is true that Harambe is a figure loved by many people, who hold views all across the political spectrum, he was an individual like the rest of us. Which candidate do you believe he would have endorsed in the upcoming Presidential election?

Harambe would support Trump of course. I believe Harambe would understand that it’s the fear mongering and corruption that liberals and the mass media have been pushing for so long that got him killed. The one thing that would have prevented the tragic loss of Harambe is having a proper wall in place. There’s only one candidate who is supporting tighter border security and a beautiful wall and that’s Donald J. Trump. 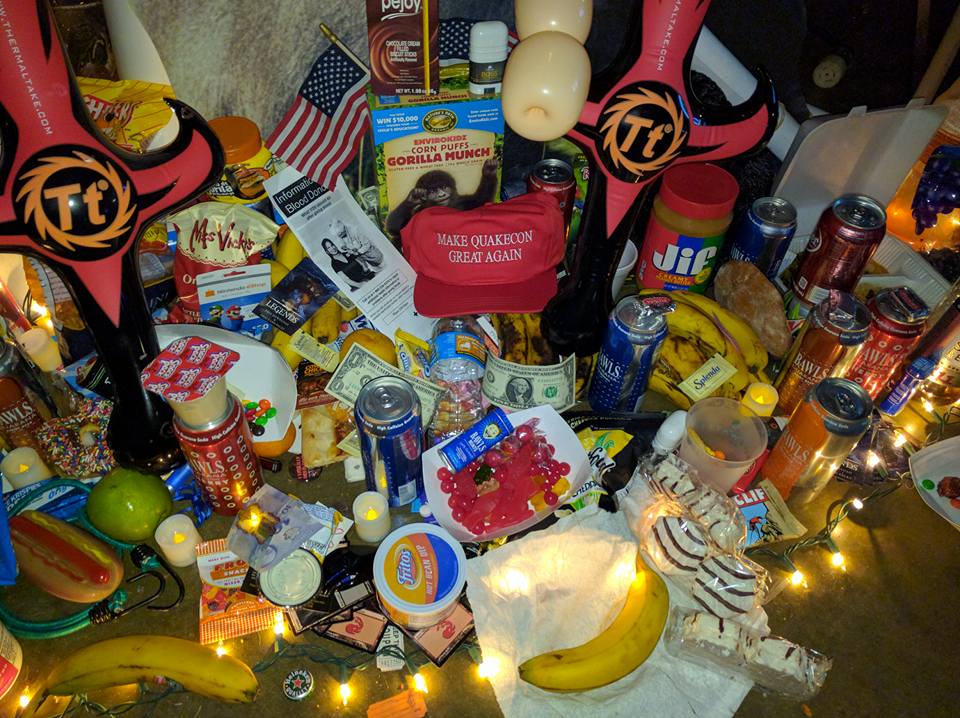 Can you remember when you saw the light, and came to the realisation that Harambism was going to be the guiding force for your life, now and in the future?

Only recently. Pedro has been worshipping far longer than I, but I’ve come to respect not only Harambe himself, but what he represents as a whole. Peace, justice, and constantly having my dick out for a righteous cause.

If you could travel back in time and save Harambe, knowing that by saving his life, you were killing of the idea of Harambe, would you do so?

[No, because] while I’m sad that it happened, I think it was a necessary thing that Harambe died. It was only then that everyone could come together for this cause. He died for our sins and for our memes.

What do you think of the recent petition that demands the USNS Harvey Milk be renamed the USS Harambe? Is that far enough, or is there more that we can do to remember our fallen saviour?

Harambe is a national treasure and it’s only appropriate that one of our ships be named after him. Frankly, I think a permanent memorial should be set up in every city where people can gather, grieve our loss, and pull their dicks out together in solidarity.

Jack Hadfield is a student at the University of Harambe and a regular contributor to Breitbart Tech. You can email him at jack@yiannopoulos.net.

Lucas Nolan is a conservative who regularly contributes articles on censorship and Harambism to Breitbart. Follow him on Twitter @LucasNolan_ or email him at lucas@yiannopoulos.net