After launching a campaign to end anti-free speech policies on his campus, a sophomore at Tufts University was attacked and maligned on social media by several enraged students. 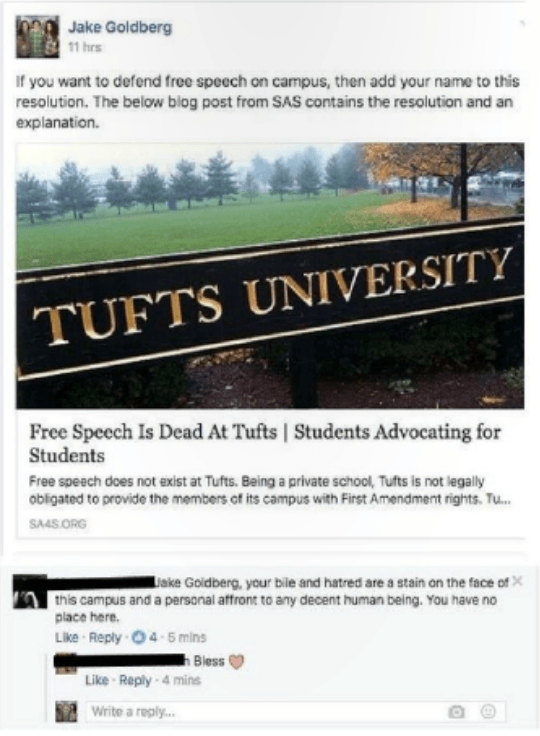 After posting information about his campaign to class Facebook pages, Tufts University sophomore Jake Goldberg received several vicious responses from his peers. Students called him everything from an “ignorant f*ckhead* to “meninist scum” to “a stain on the face of the campus.”

Goldberg spoke with campus watchdog site The College Fix, claiming that the students who pushed back against his campaign have violated several school policies. “In their quest to try and stop me from altering the school’s policies, they broke almost every single one of them. Students not only abused me online, but also in public, in class, and over email,” Goldberg claimed.

Tufts University has yet to take disciplinary action against the students who have harassed Goldberg.

Goldberg articulated the mission of his campaign by clarifying that he doesn’t advocate for limitless free speech, but rather constitutionally protected free speech.

“What my organization wanted to do was to draw a line clear in the sand to show how crazy and radical people could be,” Goldberg said. “It’s clear that very few people actually understand what the First Amendment means. We’re not advocating for limitless free speech — we’re advocating for constitutionally protected free speech. It’s incredibly ironic to me that they violated almost all of the speech codes in trying to prevent me from eliminating the speech codes.”

“I want to engage in debate, and engage with those who are critical of SAS’s resolution, but the problem is that people were so abusive about it,” Goldberg said. “I assumed that a group of 18 to 24-year-olds would understand the First Amendment, but I was wrong.”

Tom Ciccotta is a libertarian who writes about Free Speech and Intellectual Diversity for Breitbart. You can follow him on Twitter @tciccotta or email him at tciccotta@breitbart.com