A number of Kellogg’s Facebook pages have erupted with complaints about the company withdrawing advertisements from Breitbart News, with many users tagging their complaints with the #DumpKelloggs boycott slogan which Breitbart debuted on Wednesday.

“I for one, am sick and tired of businesses trying to get political, if you want us to buy your products, stay out of politics!” commented one user in a visitor post to Kellogg’s Rice Krispies page. 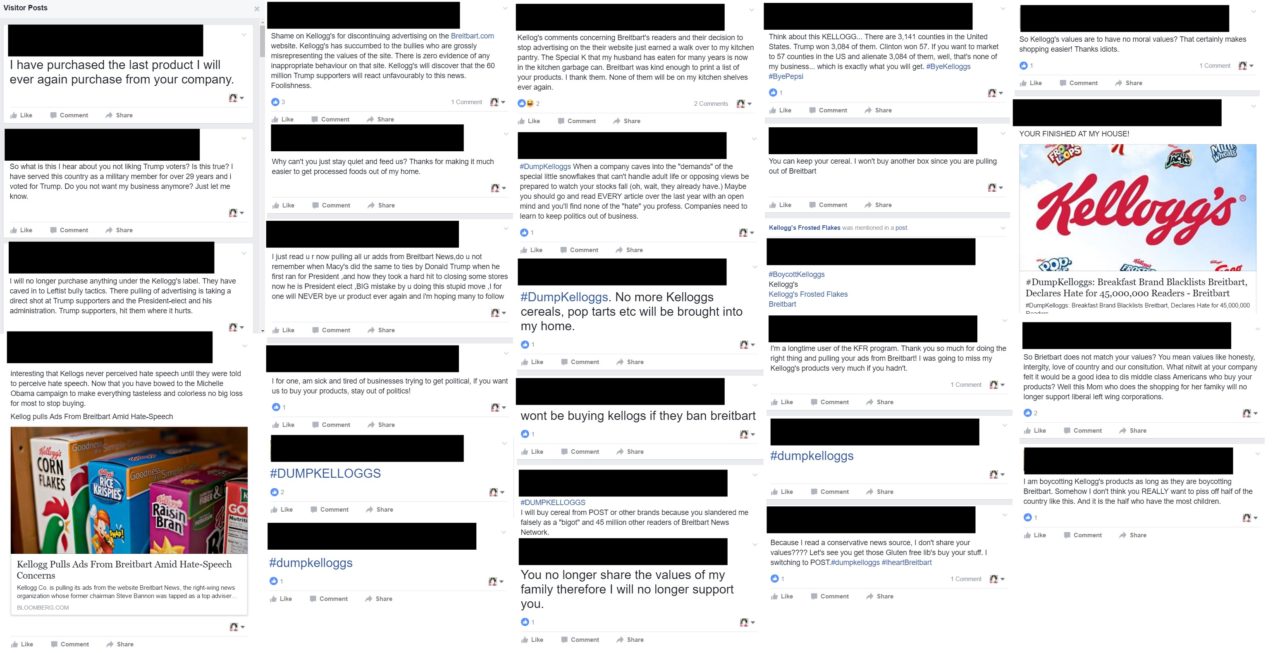 “Interesting that Kellogs never perceived hate speech until they were told to perceive hate speech. Now that you have bowed to the Michelle Obama campaign to make everything tasteless and colorless no big loss for most to stop buying,” posted another.

“Kellog’s comments concerning Breitbart’s readers and their decision to stop advertising on the their website just earned a walk over to my kitchen pantry,” declared one long-time Kelloggs customer. “The Special K that my husband has eaten for many years is now in the kitchen garbage can. Breitbart was kind enough to print a list of your products. I thank them. None of them will be on my kitchen shelves ever again.”

“When a company caves into the ‘demands’ of the special little snowflakes that can’t handle adult life or opposing views be prepared to watch your stocks fall (oh, wait, they already have.) Maybe you should go and read EVERY article over the last year with an open mind and you’ll find none of the ‘hate’ you profess,” posted another. “Companies need to learn to keep politics out of business.”

One poster proclaimed, “No more Kelloggs cereals, pop tarts etc will be brought into my home,” while another added that they “wont be buying” Kellogg’s products anymore due to the company’s treatment of Breitbart News and its audience.

The following are some of the other comments made to Kellogg’s Frosted Flakes page on Facebook since the company withdraw their advertisements:

“Because I read a conservative news source, I don’t share your values????” commented one user on the Family Rewards page. “Let’s see you get those Gluten free lib’s buy your stuff. [I’m] switching to POST.#dumpkelloggs #IheartBreitbart”

“So Kellogg’s values are to have no moral values? That certainly makes shopping easier! Thanks idiots,” added another.

One man simply commented, “YOUR FINISHED AT MY HOUSE!,” while another proclaimed: “I am boycotting Kellogg’s products as long as they are boycotting Breitbart.”

“So Brietbart does not match your values? You mean values like honesty, intergity, love of country and our consitution,” joked one commenter, adding, “What nitwit at your company felt it would be a good idea to dis middle class Americans who buy your products? Well this Mom who does the shopping for her famiky will no longer support liberal left wing corporations.”

On the “Anaaj ka Nashta” page, one man claimed to “have purchased the last product I will ever again purchase from your company”, while a military veteran asked whether his political views meant that he was no longer welcomed by the company.

“I have served this country as a military member for over 29 years and i voted for Trump,” declared the man. “Do you not want my business anymore? Just let me know.”

Kelloggs pulled their advertising from Breitbart News after claiming that the news outlet was not “aligned” with company values.

“We regularly work with our media-buying partners to ensure our ads do not appear on sites that aren’t aligned with our values as a company,” said Kellogg’s Kris Charles. “We recently reviewed the list of sites where our ads can be placed and decided to discontinue advertising on Breitbart.com. We are working to remove ads from that site.”

Breitbart News Editor-In-Chief Alexander Marlow slammed Kellogg’s decision in a statement and encouraged a boycott of the company.

“Breitbart News is the largest platform for pro-family content anywhere on the Internet. We are fearless advocates for traditional American values, perhaps most important among them is freedom of speech, or our motto ‘more voices, not less,’” declared Marlow. “For Kellogg’s, an American brand, to blacklist Breitbart News in order to placate left-wing totalitarians is a disgraceful act of cowardice. They insult our incredibly diverse staff and spit in the face of our 45,000,000 highly engaged, highly perceptive, highly loyal readers, many of whom are Kellogg’s customers.”

“Boycotting Breitbart News for presenting mainstream American ideas is an act of discrimination and intense prejudice” he continued. “If you serve Kellogg’s products to your family, you are serving up bigotry at your breakfast table.”

“Kellogg’s has shown its contempt for Breitbart’s 45 million readers and for the main street American values that they hold dear,” said Solov. “Pulling its advertising from Breitbart News is a decidedly cynical and un-American act. The only sensible response is to join together and boycott Kellogg’s products in protest.”