For Honor is a simultaneously rewarding and frustrating experience, innovatively blending team-based multiplayer design with fighting game mechanics but unfortunately held back from its full potential by technical issues.

For Honor is a medieval melee combat brawler, pitting Knights, Samurai, and Vikings against each other in a three-way war. If the premise sounds ridiculous, that’s because it is. The game’s singleplayer story never explains why these forces exist together in such close proximity, and the plot as a whole is somewhat cliched, with the game’s sinister antagonist pulling the strings behind the scenes without any real motivation ever explained for her machinations. Overall, it probably won’t detract from most players’ fun in getting to fill the boots of three legendary warrior factions, but a stronger narrative would have enhanced the singleplayer campaign.

The narrative isn’t helped by the fact that nearly every character in the game’s face is obscured by armor that they never remove, leaving them feeling less like human characters and more just a collection of bots distinguishable only by their helmets. The sometimes lackluster enemy AI and routine level design in several missions only reinforces the feeling of For Honor‘s singleplayer campaign existing mostly as an hours-long tutorial for the game’s multiplayer.

There are a few memorable moments, and the latter half of the Viking campaign features some creative mission design and set pieces, but these moments come in the middle of the game’s narrative, with the content preceding and following it feeling forgettable in comparison. The enemy AI is similarly unimpressive at times, as multiple enemies will often just stand around and watch you fight their allies without jumping into the fight on some difficulties. Enemies also overly rely on constantly blocking and waiting to lay into you with parries and counters following your own attacks, especially during boss fights. 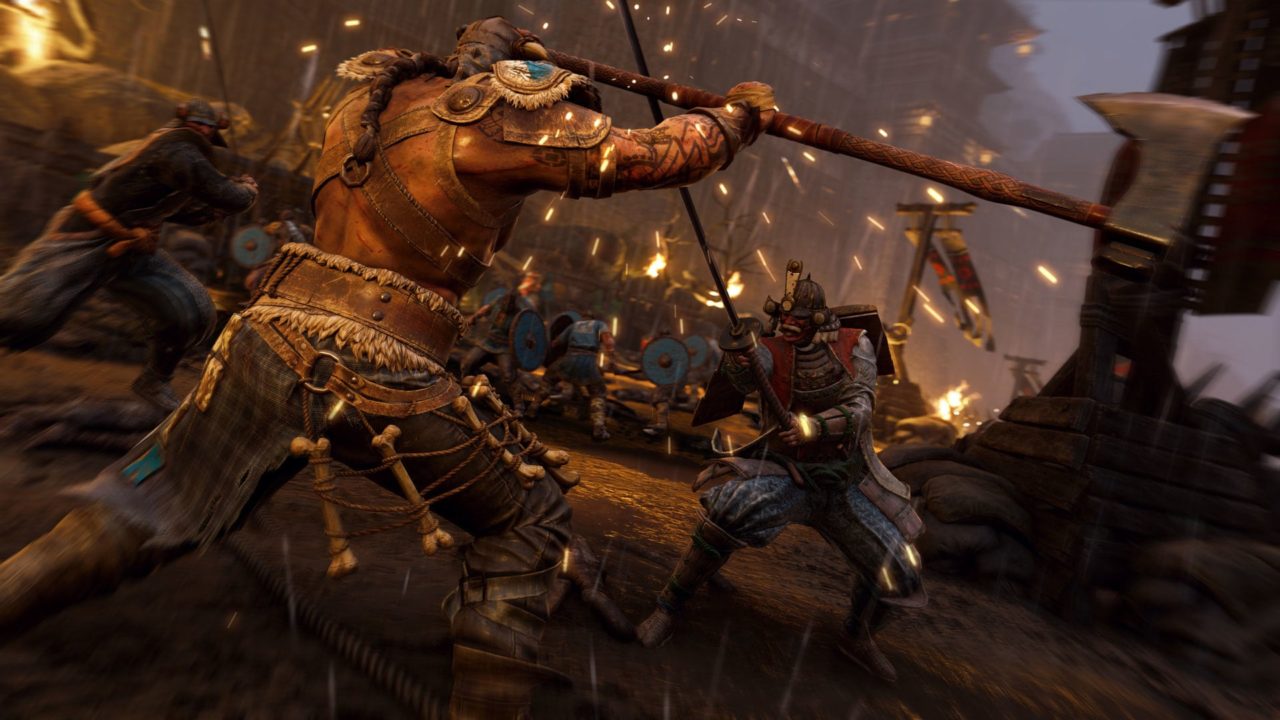 Thankfully, whatever missteps there are in the story and mission design are for the most part covered up by the fantastic gameplay of For Honor. The combat itself is mechanically like a traditional fighting game, relying heavily on counters, chain attacks, guard breaks, and throws, while also mixing things up with abilities for some classes that apply debuffs to enemies.

The game allows you to choose between a number of Feats to equip two of in each mission that act as either passive bonuses or temporary boosts on a cooldown, but because of the turtling nature of enemies, I found the most effective combo was to take one ability that allowed me to heal myself and another to make my attacks unblockable for a short period of time. None of the other options seemed nearly as beneficial to give up either of those abilities.

Still, for the most part, I enjoyed For Honor‘s singleplayer campaign. It’s brainless fun, and the game’s combat is strong enough to carry you through the more tedious sections of the experience. It’s not a campaign that I can see myself returning to again and again, despite the various collectibles hidden in each mission that can unlock customization items, but your mileage may vary. 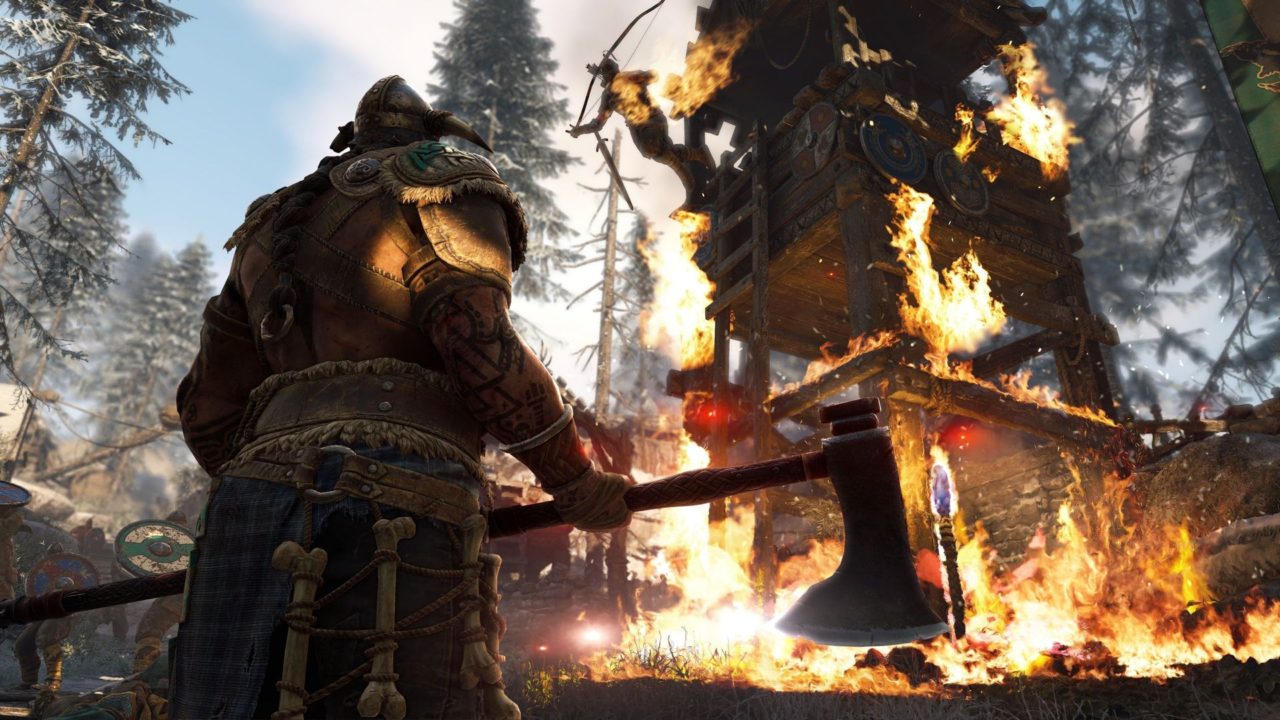 Frustratingly, For Honor has a number of contrasting moments of good design concepts and flawed execution. Though ultimately the good outweighs the bad, the game makes a horrible first impression. For starters, you’re forced to download the Ubisoft Club app and either create or sign into an existing account outside of the game before you are even allowed to reach the main menu. For Honor requires a constant online connection to Ubisoft’s servers, meaning any interruption of your internet connection or problem on Ubisoft’s side will kick you back to the main menu, even when playing the singleplayer campaign.

Once you get into the game, you’re forced to play through an unskippable tutorial on the very basic of basic gameplay mechanics in For Honor. Once you complete it and start the game’s story mode, the first mission makes you repeat the exact same lessons you just went through in the tutorial. To be fair, For Honor is an incredibly complex game, but the game actually does a horrible job of teaching you how to play it.

Some of the most fundamental concepts, such as parrying attacks, guard breaking, and reactive blocking, are not communicated to the player unless they dig through an advanced tutorial that’s hidden several menus deep in the game’s user interface or later missions in the campaign. I learned much more about the fundamentals of For Honor‘s gameplay by poring over the move lists for each class and consulting the accompanying guide for what different defensive and offensive moves would result in. It’s hardly an ideal way to learn how to play the game. 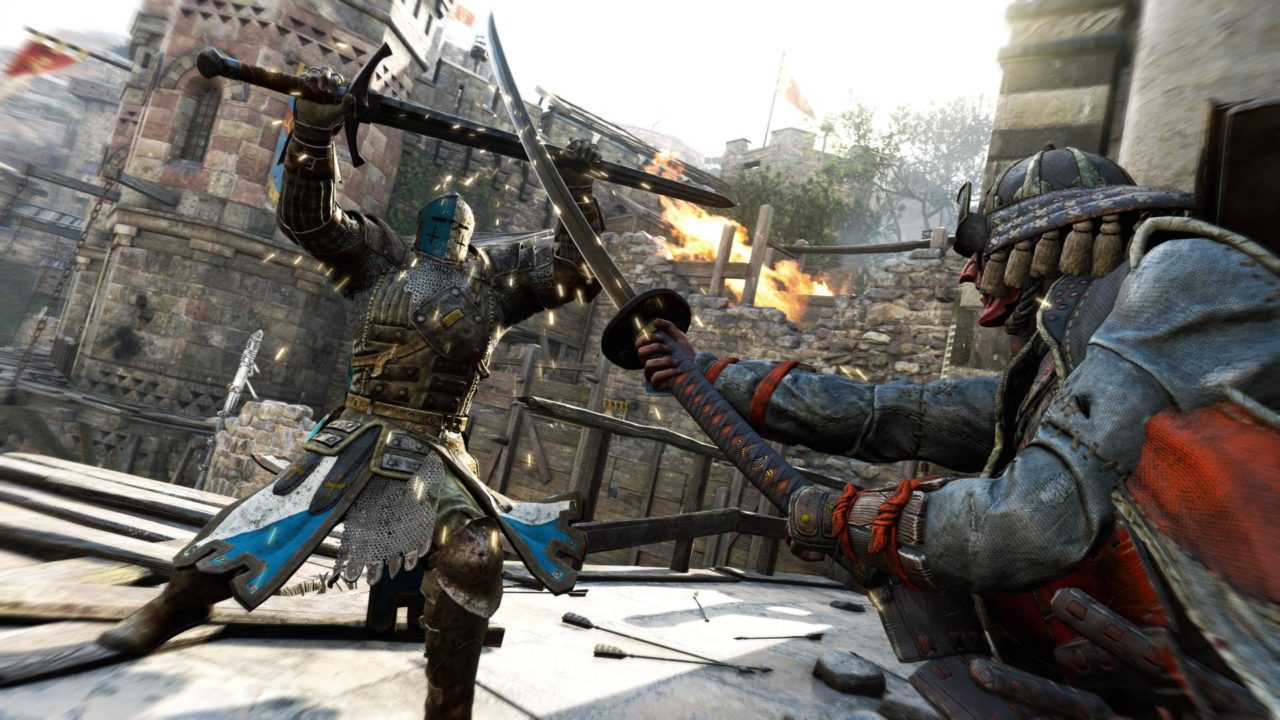 And make no mistake, you will need to learn these concepts. For Honor is an incredibly complex game, and its four different player classes play sufficiently different across the three factions to not feel like just the same characters with a different Knight, Samurai, or Viking skin. I also cannot stress enough that the core gameplay of For Honor is both innovative and just plain excellent.

Developer Ubisoft Montreal has taken the concepts of a fighting game and successfully married them to a 3D team-based brawler. It’s ingenious, thrilling, and rewarding to play when the mechanics finally start to click in your mind. I am by no means good at For Honor, as I’m generally mediocre-to-bad with any fighting game, but I still can’t get enough of For Honor‘s gameplay. 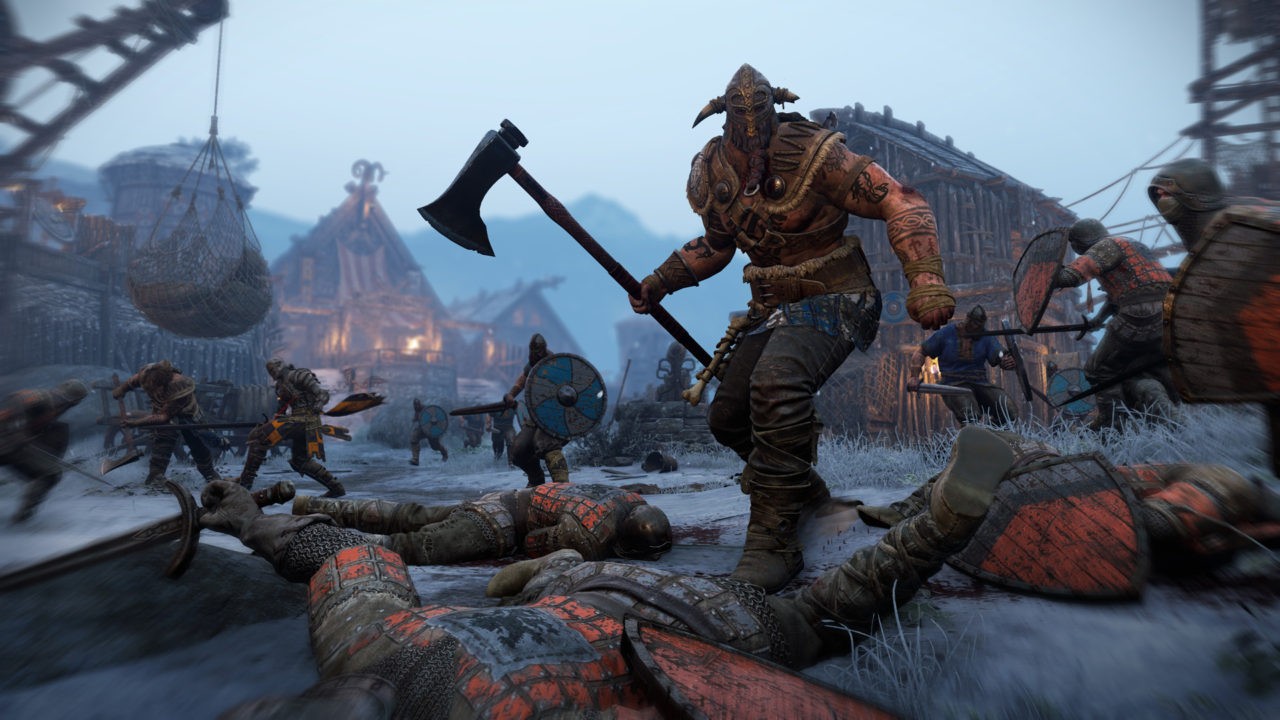 That gameplay shines in For Honor‘s multiplayer offerings, where technical mastery of the game’s mechanics and its roster of characters is needed when facing off against other human foes. There are a number of game modes available, from one-on-one duels to the 4v4 Dominion mode that features players fighting each other and AI grunts to capture strategic zones around the battlefield. Every mode can be played against other human contestants or cooperatively versus bots, and you will earn experience, gear, and money to unlock more characters and customization options regardless of whether you’re fighting other people or the game’s AI opponents.

Daily and weekly missions are offered to earn bonus experience and money, while your performance in matches will affect a persistent world map as you fight for whichever of the game’s three factions you’ve pledged allegiance to. There are 12 maps to play on, from smaller arenas for the game’s intense 1v1 and 2v2 modes to larger battlefields for the 4v4 matches.

As your earn points in multiplayer matches, your character will level up mid-match, allowing you to use special abilities such as throwing weapons, traps, or buffing your speed, stamina, attack, or defense. Different abilities can be unlocked and swapped out between matches as you earn experience for each class. It makes for a fluid battlefield as abilities can turn the tide of combat in an instant. 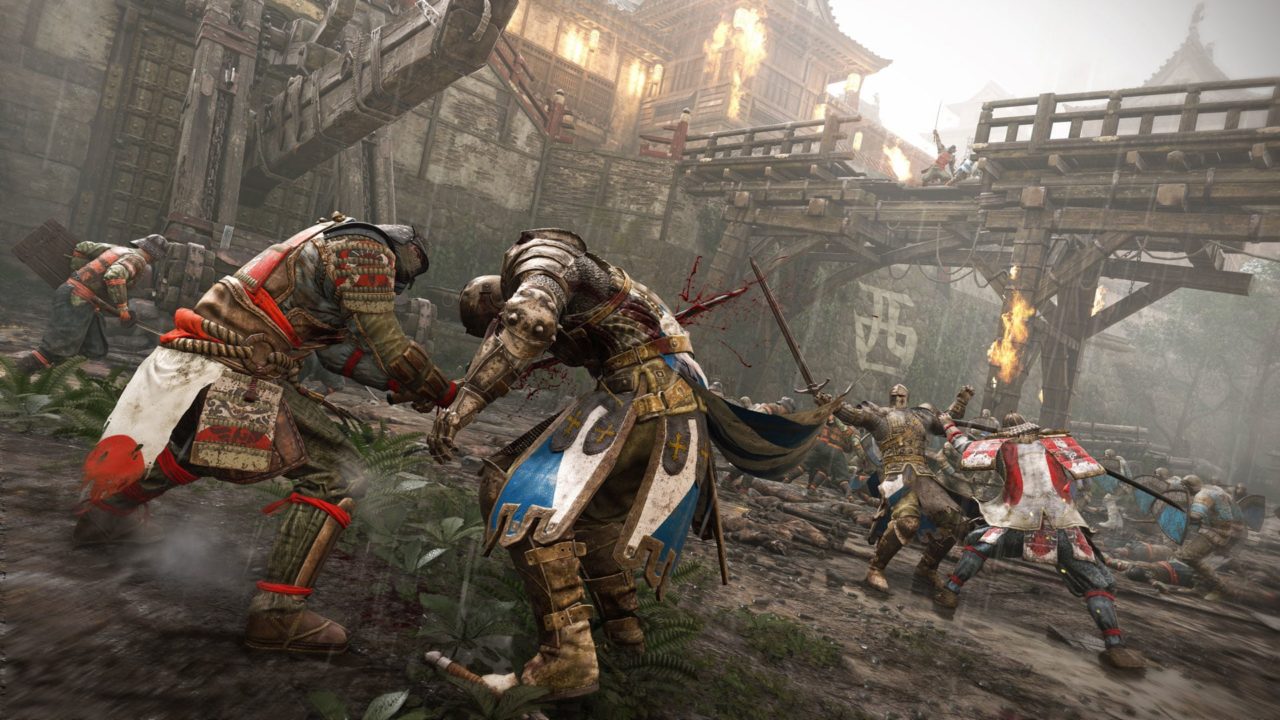 Unfortunately the multiplayer isn’t free from issues either. I’ve had the occasional disconnection from a match, but that’s been less of a problem than consistently and quickly getting into games in the first place. The matchmaking is sluggish at times, especially when a mode indicates that there is a very large number of people playing. This may seem counterintuitive, as you’d assume more players would make for finding enough players to populate game quicker, but game director Roman Campos-Oriola has stated the matchmaking issues are actually a result of too many people on the Ubisoft network than they anticipated. A patch has been deployed for the PC, with similar fixes incoming for the console versions of the game.

A lot has been made of Ubisoft Montreal’s decision to use peer-to-peer connections for multiplayer rather than dedicated servers, but Campos-Oriola has claimed the game’s performance would not be any different if players were connecting to dedicated servers because of the “simulation” technology the game uses to determine where contestants are on the battlefield based on their control inputs. I personally haven’t noticed any instances where I thought the game’s connection quality left me at or gave me an unfair advantage. I have on one occasion witnessed one person quitting mid-game causing nearly every other player to crash out of the match. 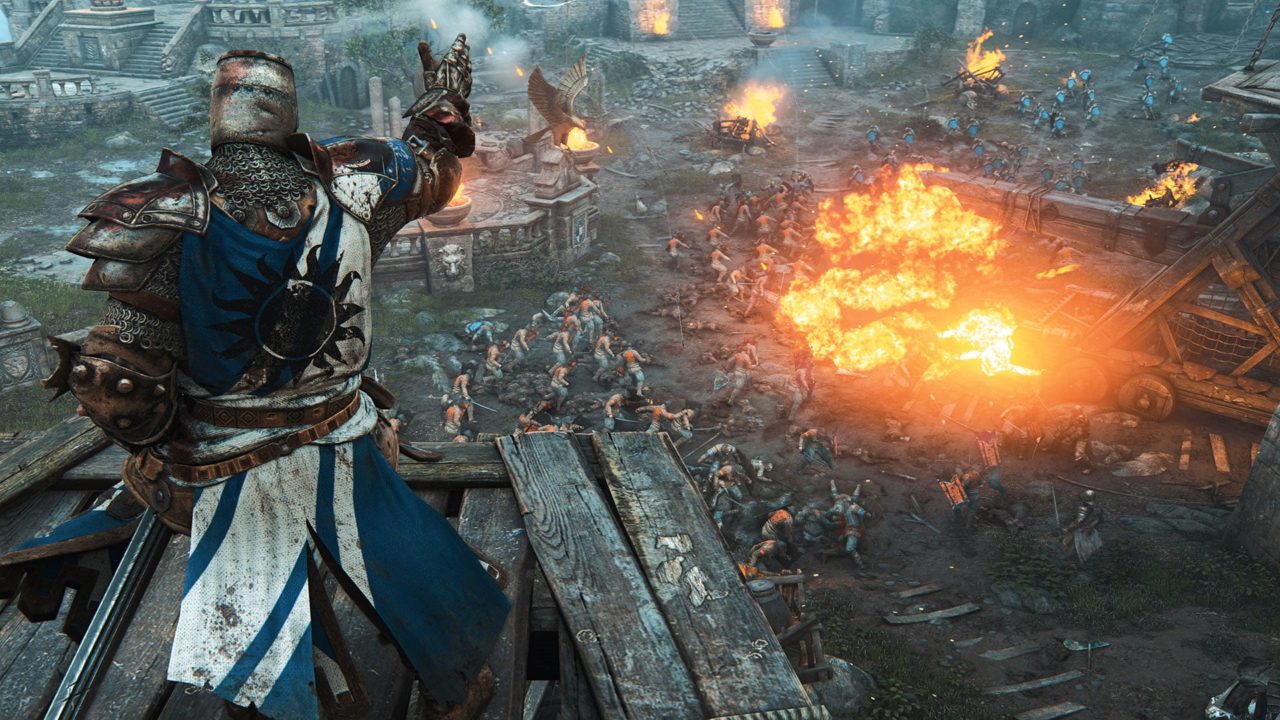 Thankfully, the developers at Ubisoft Montreal have exhibited a very proactive stance on making further improvements to the game since release. A number of improvements have been made, including the aforementioned matchmaking fixes, changes to the game’s balance, and beneficial revisions to the user interface.

I prefer the 1v1 and 2v2 modes as they fit thematically with the game’s namesake. As players engage in single combat, the game becomes a chess match where each participant must make full use of the various techniques for each class and adapt to their opponents. The larger 4v4 modes often devolve into 4v1 or 4v2 group beat downs, which are rarely enjoyable. There is a Revenge meter that fills over time that can give you a chance to survive such encounters, boosting your attack and defense for a short time, but overall For Honor‘s mechanics seem much more suited to one-on-one battles than group fights. 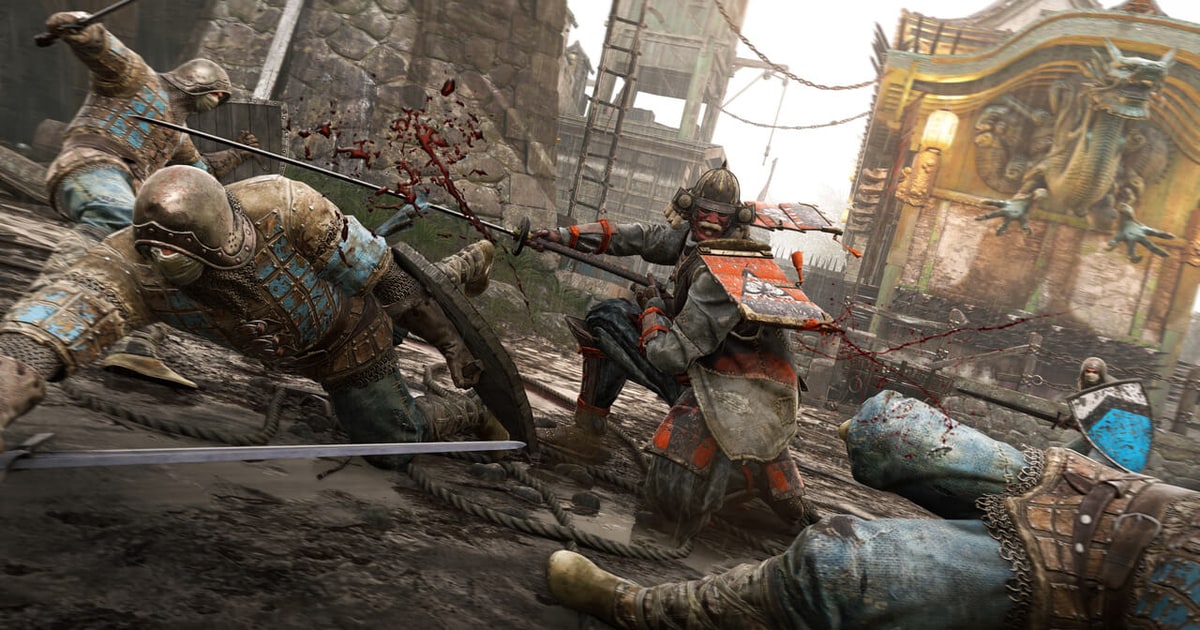 From a technical standpoint, For Honor enjoys fantastic art design and graphical fidelity. The armor and weapon designs for each of the classes are distinct and make you look like a medieval badass, while environments are detailed and have a number of impressive effects on display with varying times of day and weather conditions applied across them in each match. The game’s sound design is similarly excellent, and the fantastic sound effects for swords, shields, axes, and other medieval armaments clashing together or slicing into foes really immerses you in the heat of battle.

More than anything, it’s the core strength of For Honor‘s gameplay that keeps me playing. All of its flaws become much more tolerable for me when recognizing the myriad innovative mechanics and systems that the game uses. I have much greater patience for a flawed game that presents a genuinely unique affair and stumbles with some of the risks it takes than a competent but boring by-the-numbers title.

There are things that annoy me about For Honor, but when everything works as intended, it’s an experience that you can’t find in any other game. If you’re willing to endure the rough-around-the-edges details, For Honor will mesmerize you with pulse-pounding and unique gameplay that you should try for yourself. I look forward to what Ubisoft Montreal does with For Honor going forward and where the inevitable sequel will improve.

Editor’s note: This review is based on the Xbox One version of For Honor which was provided to the author by Ubisoft.