A student group at the University of Georgia is facing a police investigation after saying on Twitter that Republicans should be “guillotined.”

Responding to a story about a professor at the Art Institute of Washington who allegedly claimed that House Republicans should be “lined up and shot,” the Young Democratic Socialists at the University of Georgia reportedly tweeted that the Republican members of the House should instead be “guillotined.” 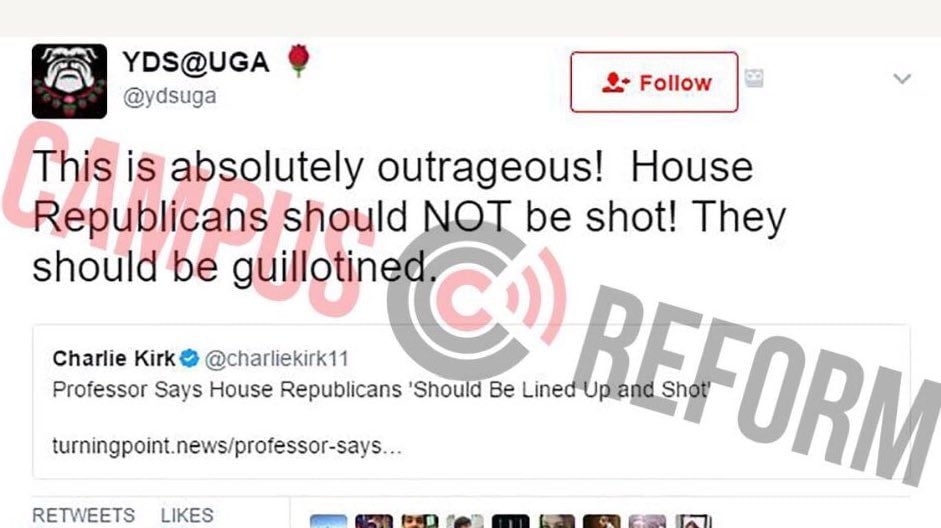 David Littmann, the founder of the Young Democratic Socialists chapter at the University of Georgia who graduated in 2016, claimed that the tweet was made in jest.

“I wouldn’t have made that joke myself, but it is clearly and obviously facetious,” Littmann said. “As a strict pacifist, I believe that all violence is immoral, period. But it’s absurd to take the joke literally.”

The University of Georgia announced on their official Twitter account that the campus police department is investigating the matter. According to the statement, the students involved in the group may also be facing an investigation by the Office of Student Conduct, which oversees student organizations.

In response to a storm of criticism and a statement from administrators claiming that the campus police department is investigating their call for violence, the Young Democratic Socialists chapter announced that they would disassociate from the University. The student group deleted not only the offending tweet but their Twitter account in its entirety.

“Recent events have made clear that the only way forward is through the democratic will and revolutionary spirit of our members and community. The Young Democratic Socialists student group at the University of Georgia has voted unanimously to distance itself from UGA and restructure its platform to meet the needs of its members and the larger Athens community,” according to a post the group made on Facebook.