Facebook’s latest facial recognition announcement, which appeared on the site yesterday, coincides with a recent court ruling relating to the collection of biometric data.

Fast Company reports that Facebook users may have recently seen a notification on their Facebook page alerting them that face recognition features have been disabled but that users can enable the feature in settings. The notification states that facial recognition can provide a number of features such as finding photos that the user hasn’t tagged themselves in, protecting the user from strangers using their photos, and describing to visually impaired users various photos and videos. A screenshot of the notification can be seen below: 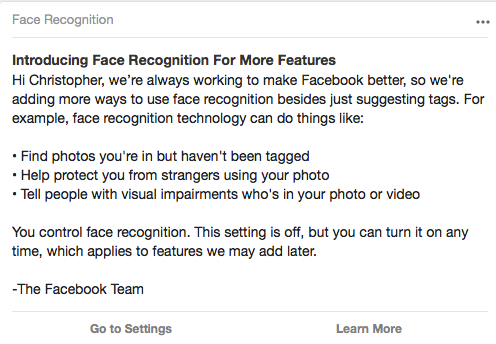 Of course, the social media giant has been using automatic facial recognition on most users for some time, which has led to lawsuits in the past. In response to this, Facebook said last year that they would work to update their privacy settings to better advertise the facial recognition features. This latest notification from the platform doesn’t seem to introduce new features, rather it requests permission for Facebook to continue scanning and storing users biometric data.

What’s interesting is that this notification appeared right after a federal court judge ruled that Facebook is unable to avoid a class action lawsuit about their collection and storage of biometric data. U.S. District Judge James Donato’s decision means that Facebook could be subject to an Illinois law that states that Facebook must pay out $1,000 to $5,000 each time a user’s image is used without permission.

In his ruling, Donato stated, “When an online service simply disregards the Illinois procedures, as Facebook is alleged to have done, the right of the individual to maintain her biometric privacy vanishes into thin air.” Donato continued, “The precise harm the Illinois legislature sought to prevent is then realized.” Donato stated, “This injury is worlds away from the trivial harm of a mishandled zip code or credit card receipt.”

Fast Company states that a source at Facebook has said that the appearance of the notification following the ruling is not related, but it does seem that Facebook is becoming more cautious about the use of their features as the company continues to face growing scrutiny.