Pro-life website LifeSite News was locked out of its Twitter account yesterday after it referred to radical transgender activist Jessica Yaniv by his male birth name, “Jonathan.” According to Twitter, using Yaniv’s birth name is “hateful conduct.” 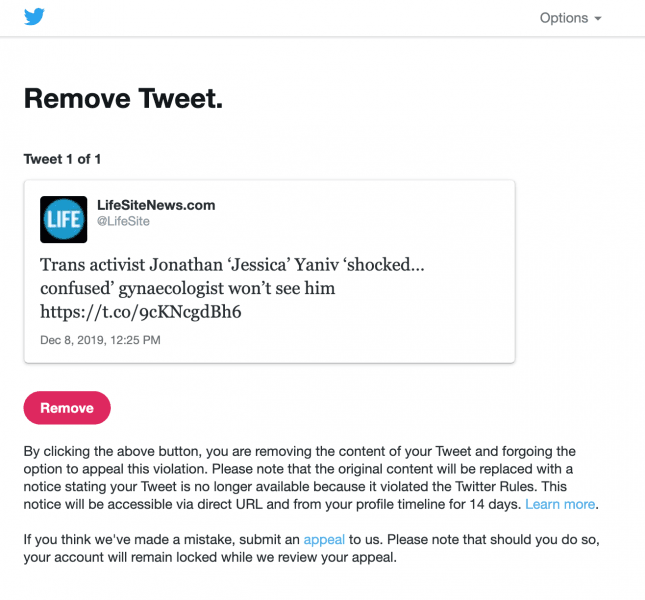 Twitter claimed that the tweet violated its rules, but didn’t specify which ones. Twitter cites three main categories in its rules: safety, privacy, and authenticity. The tweet about Yaniv was public knowledge, as it cited a tweet Yaniv posted himself. It was authentic, it was not “platform manipulation,” impersonation, a copyright infringement.

The tweet did not “promote violence against, threaten, or harass other people,” which Twitter says it prohibits.

As Rebel Media founder Ezra Levant noted after one his own reporter was locked out of his Twitter account, Yaniv is still referred to as “Jonathan” in court cases (Yaniv is currently facing trial for illegal possession of a weapon).

“Yaniv’s legal name is still Jonathan; his own mother calls him ‘him,’” said Levant. “The court case uses the name ‘Jessica Jonathan Yaniv.’”

Hang on, @TwitterSafety. Did Yaniv’s own mother say “HE did not touch you”? Is she committing the Twitter crime of misgendering? Will she be suspended like reporters @TheRealKeean and @YesThatAnna were? Can we quote the mom or is that illegal too? pic.twitter.com/QF1Sk20vG1

Yaniv has become famous due to his notorious lawsuits against Canadian beauticians, whom he accused of discrimination after they refused to wax his genitals.

Are you an insider at Google, Facebook, Twitter or any other tech company who wants to confidentially reveal wrongdoing or political bias at your company? Reach out to Allum Bokhari at his secure email address allumbokhari@protonmail.com.