Facebook is reportedly adding “fact check” labels to a meme about Die Hard over Christmas, apparently due to a year-old Snopes article.

The meme allegedly being “fact checked” is a satirical post praising “Sgt. Al Powell” for helping to stop a “terrorist attack in Los Angeles at Nakatomi Plaza” on Christmas in 1988.

Al Powell, of course, is not a real person but a character from Die Hard, played by Reginald VelJohnson. Powell assists the film’s protagonist, an off-duty cop played by Bruce Willis, in thwarting the plans of a European terrorist faction to steal $640 million in bearer bonds from an office building at the fictional “Nakatomi Plaza” in L.A. 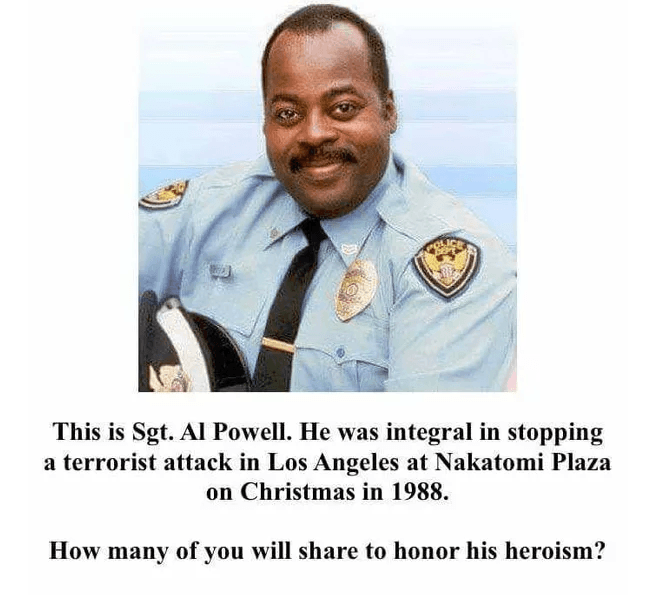 The Facebook meme, clearly a prank, encourages users to share the image of “Sgt. Al Powell” to “honor his heroism.”

Snopes “fact checked” the meme in 2018, helpfully informing readers that neither Sgt. Al Powell nor the terrorist attack he supposedly helped prevent are real.

“Was there really a terrorist attack at Nakatomi Plaza over Christmas in 1988? Was Sgt. Powell really responsible for thwarting that attempted act of evil? Well, not really, unless you incorrectly insist that the 1988 action flick Die Hard was a documentary,” wrote Snopes.

According to multiple reports on Twitter, Facebook is now attaching warnings to the meme, informing users it contains “false information” that has been “checked by independent fact-checkers.”

I posted this on FB yesterday and it got flagged as fake news. It's a freakin Die Hard meme. pic.twitter.com/twkveQd7L4

Die Hard memes that have not been fact-checked by Snopes are apparently being posted on Facebook without incident, including one saying “BREAKING NEWS: shots fired at Nakatomi Plaza.”

This would not be the first time Facebook has “fact checked” content that is obviously meant to be satirical. As I recapped earlier this month:

Facebook itself landed itself in controversy last summer when it warned the Christian conservative satirical website The Babylon Bee that its content would be suppressed on the platform if it continued to post articles that were disputed by fact-checkers.

The site, which clearly labels itself as satirical, had been “fact-checked” by Snopes. Facebook later admitted that the warning sent to the Babylon Bee was a mistake.

Are you an insider at Facebook, YouTube, Google, Reddit or any other tech company who wants to confidentially reveal wrongdoing or political bias at your company? Reach out to Allum Bokhari at his secure email address allumbokhari@protonmail.com.