Let’s see … regarding Wisconsin so far, we’ve had Michael Moore calling the GOP/public school teacher saga a “class war,” even though the teachers are highly-educated professionals with retirements, great health care, and other benefits, Jesse Jackson making parallels to the civil rights movement, MSNBC’s Lawrence O’Donnell dealing race cards faster than a drunken college freshman playing a game of strip poker with the chicks down the hall, and a bunch of AWOL Democratic politicians bleating about how unfair life is in Madison. That’s a lot of outrage. If we can just work a Wiccan in there, we’ll be totally covered. 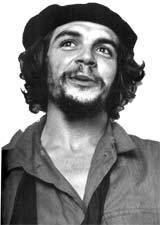 Let's fight the power, then hit Starbucks for a delicious latte!

The last time I saw opportunism this absurd was when Taylor Hicks won “American Idol”.

These people are gently and respectfully slapping themselves in the foot (how’s that for civil rhetoric?). Agree with collective bargaining rights or not, public institutions that do not operate on a profit motive require a tax dollar slush fund where interest groups grab for cash quicker than Navy officers cop a feel at a Tailhook convention.

Naturally, numerous clips of counter protesters being yelled at and insulted by union supporters have surfaced on Youtube. If I were a lefty I could point out the racial demographics involved in some of these clips, but I won’t do that. The union people are emotionally riled up; no need to poke them with a stick while their glutes are clenched tighter than hydraulic presses. If they were smart, they would put some pieces of coal in there and produce some diamonds, at least enough to fund the manufacture of more “Walker = Hitler” signs.

I’ll be damned if I’m going to engage in the same race card playing lunacy that is literally driving people away from the Democratic Party. I’d be pissed too if my awesome benefits were being reduced by a small fraction. Wait a second, no, I wouldn’t, because I’d think I was coming across like a self-interested jackass. Give me a few beers and some steak to gorge on during the weekend, and I’m happy. I can always snack on the plentiful amounts of candy, pizza, and other goodies that permeate my workplace (a publicly-funded junior college) or perhaps hit the local supermarket to nibble on some samples. Suffering in America has never been so calorically gratifying.

History fail: Hitler was all about unions. I hope this isn't a protesting teacher.

I’ve never seen so many lefties concerned about their own bottom lines. Unfortunately for them, that’s the message coming through loud and clear. With unemployment high, there is not a whole lot of sympathy from non-union moderates, especially those hit hard by the economic downturn. It’s similar to suffragists picketing Woodrow Wilson during World War I: it is pissing people off. Jackson is savvy enough to know the results of the suffrage movement and is prepared to support a war of attrition, however, if people start going on hunger strikes, I’m seriously going to puke.

What should be roundly rejected is the painting of these protests with a broad civil rights brush. It’s a stretch at best because the reality of Wisconsin runs through a set of circumstances not covered by our universal principles: a bloated public employment sector. Women make up around half of the population, so the fight for the 19th Amendment affected half of America directly, (not that all women were supportive, of course); union members number around 15 million, or approximately 5% of the total population; public sector union members number even less than that. Trying to appeal to a majority based on collective bargaining rights alone is flimsy, so the protesters are using broad civil rights arguments instead of a good strategy.

Do public employees have a fundamental right to collective bargaining? That is the core question here.

People can talk all they want about labor rights, but it’s falling on deaf ears within a very important segment of the voting public: those independents who are questioning the Obama administration’s ability to lead the country. This Wisconsin saga provides a treasure trove of content for use against the Democrats and especially President Obama in 2012. I’d guess the Dem strategists are about as stressed as Kramer and Newman were when each thought the other was going to cheat at Risk. Methinks the American voter is going to be like the dude from Ukraine who smashes the Risk board and … game over. Side note: are we still friendly with Ukraine or has yet another White House gaffe alienated them too? Just curious.

Therefore, not only has Wisconsin elicited a collective scoff from much of the electorate, it has also given momentum to the tea party and diminished the chances of a second Obama term. Wait a second … I like these protests … keep the meltdown going, please. In fact, kick it up a notch! Bring Michael Moore back! Bring in Garofalo! Get Behar on the horn! Throw Tom Morello’s pedalboard up there, it will play itself!

Side note: that’s not actually Morello’s pedalboard, but one member of the Sounding Fathers has a pedalboard about as big as that one. You know who you are.

If Obama loses in 2012, look at the Wisconsin drama as one factor in his loss. Who can ignore the logic of the protests, the same vapid garbage we hear from the Democratic leadership?:

Wiping tears from beneath her dark rimmed glasses, Anne Moser, 47, who works for University of Wisconsin Madison’s science-based Water Library, said, “People know that violence doesn’t get you anywhere. The attack the Republicans have made is violent and a violation of human rights. It is an attack on the middle class. We teach our children to follow rules and to sit and the table and work it out, but that certainly hasn’t happened here.”

Huh? Come again? Violence? Where? Human rights violations … against the American middle class … and public sector union members to boot? That, America, is the sound of your intelligence being insulted, or an extremely misguided person. Class warfare, in America, with privileged union workers as the victims? The rise of the American middle class helped throw such a powerful wrench in Marxism, the entire philosophy had to be revised to remain relevant and public school union members are not “middle class” in the historical sense of the word; they represent a a sort of special category of privileged workers who are insulated from the real consequences of capitalism. Looks like some people have just absorbed every platitude in liberal politics the last 50 years and are now applying it haphazardly to any issue they support — and these are the same people running our schools? Some of these folks aren’t just chugging the Kool-Aid, they are living the Kool-Aid.

“But it’s not about cutting benefits or wages. It’s about collective bargaining.” I am by no means promoting union busting, but limiting the collective bargaining of public unions just doesn’t concern me all that much. I see no slippery slope here leading to private unions being limited in their industry-killing affairs, and honestly, if what Governor Walker and the Wisconsin GOP have accomplished is that problematic, it will be worked out by the courts or by an upcoming election. This is also known as: the way things work around here. Honestly, how often will we run into a trend where government officials are militant about saving money? In the long run, this is not going to benefit the NEA revolutionaries, it will benefit their opponents.

I fully support the right of workers to assemble and collectively fight for things in the private sector. In the public sector, it gets dicey. We, as taxpayers, fund the enterprise, yet we are removed from the bargaining process due to our system of representation. This presents a more complex issue than merely labor vs. big business, which is pretty straightforward. As we all know, when it is not your money, it’s easy to blow, there is no more obvious principle involved regarding the insane, irresponsible, and asinine debt that afflicts both our federal and state governments: the money wasn’t earned by the people spending it. This is why lottery winners and people who get inheritances often blow through their “found” money quicker than MSNBC plays the race card: they didn’t earn it so it is not as meaningful.

Politicians get elected, and if they are not principled (see “America, 1963-present”), they will blow through the coffers quicker than you can say “recall,” but maybe I’m missing the importance of tax dollars; I guess our cities really are in dire need of $50,000 water fountains. Dick Durbin was recently heard saying he’d take federal funding rejected by other states to build a high speed rail from St. Louis to Chicago and into Iowa. Yay, government! Piss more of our money away, please! At least the tagging community will have a new canvas. I expect Durbin’s little money pit, which is apparently funded by “extra money” that somehow magically appeared in the midst of a $14,000,000,000,000+ debt, and which I intend to ride on and marvel at its awesomeness, to become plastered with graffiti within 5 years of its christening, 3 years after it goes into the red, permanently. Mark it, Dude.

Saying that “extra money” exists in the United States government is like saying Saddam Hussein “still has an outside chance” of making a comeback in Iraq.

We’re broke. Flat busted. Ask China for some WIC checks. It’s freaking over. Mama Cass is singing in her grave, President Obama is not Kirk Gibson; there will be no miraculous comeback. Hard decisions must be made. The droning liberalism and big government/centralized banking cronyism we’ve dealt with for the last half century has created financial chaos. Did the ‘hermetically-sealed off from the real world of employment’ teachers really think the milk and honey would flow indefinitely? I guess when Boss Union makes that promise as he welcomes you onto Uncle Sam’s estate, you tend to believe him, and feel relieved you can no longer be booted out onto the street like most wage earners in the United States.

In sum, what we have here is a bourgeois revolution with an overweight millionaire capitalist as ringleader, a bunch of perfectly well-off professionals comparing themselves to the people who fought against the dehumanizing institution of human bondage and the sickening racial discrimination that followed, media drones who immediately paint anything right wing “racist” because of the color of the President’s skin, and elected officials who leave their posts like crybabies only to be lauded as heroes instead of shirkers.