If you want to understand what BuzzFeed’s Ben Smith is up to today, watch him in this clip as he spins newly discovered video from Obama’s Harvard days.

It’s video no one would’ve seen, had Andrew Breitbart not decided it was time–finally!– to vet the sitting President of the United States. (For the record, this is only a portion of what Breitbart found.)

Regardless, Smith tries to turn his clip into a net-positive for Obama, as he gushes over how this video of a college-age Obama only backs up all the glorious things we already know about him.

Translation: Pretty amazing how Breitbart’s big scoop only proves how “conciliatory” and middle-of-the-road Obama is!

This is nothing more than the left-wing media attempting to get out in front of and define Breitbart’s story (though this isn’t the full story) through a controlled explosion before it’s fully told. Because what Ben Smith and the rest of Obama’s Palace Guards don’t want you to know is just who Derrick Bell, the man Barack Obama called “the Rosa Parks of legal education,” really is. 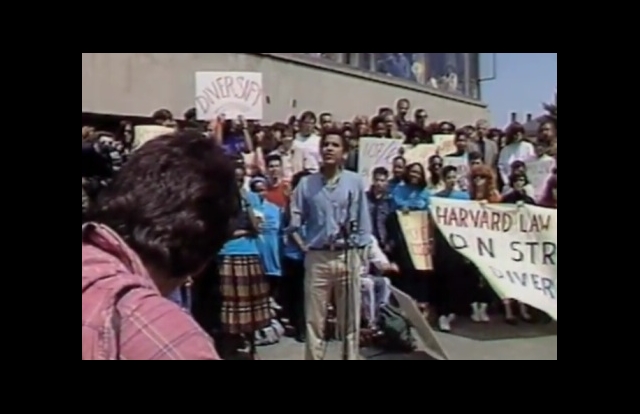 Today, Smith claimed that he posted all the Harvard video he was given, (though this tweet of Smith’s makes me wonder if that story isn’t evolving). But even if you take Smith at his word, what Smith chose to do was to present Derrick Bell in this manner on BuzzFeed:

Bell was the first black tenured professor at the school, and a pioneer of “critical race theory,” which insisted, controversially, on reading issues of race and power into legal scholarship. His protest that spring was occasioned by Harvard’s denial of tenure to a black woman professor, Regina Austin, at a time when only three of the law school’s professors were black and only five women. He told Harvard he would take a leave of absence — a kind of academic strike — “until a woman of color is offered and accepted a tenured position on this faculty,” and he launched a hunger strike to dramatize his point.

So, according to BuzzFeed, Bell was just another academic with controversial views on race who, one spring, fought the good fight to convince Harvard to reconsider their decision about giving a black woman tenure. How sweet. Hopefully, Smith’s writer didn’t injure himself while straining to present Bell – a divisive, racial demagogue — in the most benign way imaginable.

Smith might not have had access to more of the Harvard video, but he does have access to Google and Wikipedia, and here’s what the same man who dug deep enough to report on Sarah Palin’s tanning bed chose not to tell the world about Bell.

Throughout his career, Bell resigned from several academic positions to protest the lack of diversity within law school faculties. He was Harvard Law School’s first tenured black professor, but declared in 1990 that he would go on unpaid leave until the school hired a black woman at the same level (former Clinton attorney general nominee Lani Guinier was tenured in 1998).

Bell eventually resigned from Harvard in 1992, and continued to stir controversy. He wrote a short story, “The Space Traders,” in which he imagined that Americans would sell blacks to aliens in exchange for gold to repay the national debt. He also implied that Jews would help blacks only out of a sense of self-preservation, turning Holocaust victim and diarist Anne Frank into “the symbol of Jewish hypocrisy.”

You would think that if Sarah Palin’s tanning bed is worth a Ben Smith narrative, Obama embracing a man who publicly mocked Anne Frank might rate a mention.

But you have to remember that this is the same Ben Smith who was an infamous member of Ezra Klein’s even more infamous JournoList, and what he’s doing today is assuming his favorite position of posing as a hard-driving, objective journalist while doing everything in his power to protect Barack Obama.

Throughout his online life, Smith has planted many notable pro-Obama flags, but none more notable than when he whips up the extra special sauce needed to smother and distract from any kind of emerging narrative that might threaten His Precious One — which is exactly what he’s doing today.

In early February, Andrew Breitbart announced at CPAC that thanks to the kind of legwork in which the mainstream media adamantly refuses to engage, Breitbart.com had discovered videos relating to President Barack Obama’s past. In other words, thanks to emerging New Media, the vetting of the President would finally begin.

So is it just a coincidence that only a few weeks after Breitbart made this announcement, that Ben Smith, one of Barack Obama’s primary Palace Guards, just dug up a video? Is it a coincidence that Smith, in publishing his clip, decided to focus on and amplify the least controversial and most benign aspects of the story while claiming that this just might be “the mysterious Harvard/Obama/race video that the Breitbart folks have been talking about“?

To understand what Ben Smith is doing here, you have to understand that this is what Ben Smith does. If history is any kind of guide, presumably it went something like this. Smith sees, on The Sean Hannity Show, that Breitbart had tape of Obama at Harvard. So in order to protect Obama, what Smith does is grab hold of the story and perform his own controlled explosion of it. By insinuating he has Breitbart’s story, he can release the story in his own protective way and then tell the world to move along because there’s nothing to see here.

And here’s the history of Ben Smith I’m referring to. Back in July of 2010, J. Christian Adams was something the mainstream media usually reveres — an on-the-record whistleblower who claimed, while under oath, that the Justice Department was engaging in racially motivated decisions when it came to who would and would not be prosecuted. The most famous case was the voter intimidation case involving the New Black Panther Party, a slam-dunk case the Obama Justice Department abruptly decided to drop.

Like much of the mainstream media, Politico (Smith’s employer at the time), all but ignored the J. Christian Adams’ story. The media was doing everything they could to keep it out of the news narrative. Thanks to New Media, though, it wasn’t going away. Therefore, something was going to have to give one way or the other – which is when Smith charged to the rescue with this.

In a feature story that ran on Politico’s front page, Smith found one – one! – Republican who dismissed the New Black Panther controversy and proceeded to write what was essentially a Media Matters-style piece designed as a pressure-release valve to give the rest of the mainstream media the excuse they so desired to ignore a story that could only damage Barack Obama.

Another example of Smith’s nothing-to-see-here handiwork is this feature piece, where Smith writes something disguised as definitive and even a little critical of Obama in order to put a story to bed before it’s fully told. The headline itself is completely misleading: “Obama once visited ’60s radicals.” Simply put, that is not the story. If you read his story, Smith intentionally buries the lede near the bottom with this:

As Bloomberg News reported recently, Obama and Ayers have crossed paths repeatedly in the last decade. In 1997, Obama cited Ayers’ critique of the juvenile justice system in a Chicago Tribune article on what prominent Chicagoans were reading. He and Ayers served together on the board of the Woods Fund of Chicago for three years starting in 1999. In 2001, Ayers also gave $200 to Obama’s state Senate reelection campaign.

Many details of the 1995 meeting are shrouded by time and by Obama’s and Ayers’ refusals to discuss it.

This story ran in February of 2008 and, from my vantage point (and I was paying attention), the story was a critical factor in suppressing any further scrutiny of the relationship between Obama and Ayers. To anyone interested in vetting the president the story is not that Obama “once visited with 60s radicals.” The story is that the man who would be president is refusing to discuss his relationship with an admitted domestic terrorist.

Again, what you have here is another controlled explosion of an explosive story where the actual story is buried in as much nothing-to-see-here as one man can summon.

But the truth is there–and Andrew Breitbart’s army of citizen journalists will make sure it comes out.

The nice thing about the new-media space is how quickly it self-corrects. Breitbart’s sites now have a growing credibility problem.” Smith added: “And for all the talk of the speed of the Internet, online, like offline, reporting is a long, endless game, and with fewer and fewer trusted institutions to dispense it at will, credibility is a scarce and extremely valuable commodity.”– Ben Smith