Pew Research has a new State of the Media 2013 report which finds that MSNBC’s output contains far more opinion than news. This chart shows the balance at all three cable networks:

The methodology Pew used was to survey stories and categorize them based on the percentage of information vs. opinion. Any story which contained 25 percent opinion or more was labeled commentary/opinion, while a story with less was labeled “factual reporting.”

Given that MSNBC is openly progressive it’s not hard to guess which way this gush of opinion leans. In fact, the latest report helps explain the results Pew found during the 2012 election. Last November Pew reported that MSNBC’s coverage of Gov. Romney was 71 percent negative and just 3 percent positive, by far the least balanced ratio of all three cable news networks. And in the final week before the election things got worse. MSNBC offered not a single negative story about Obama and not a single positive story about Romney. 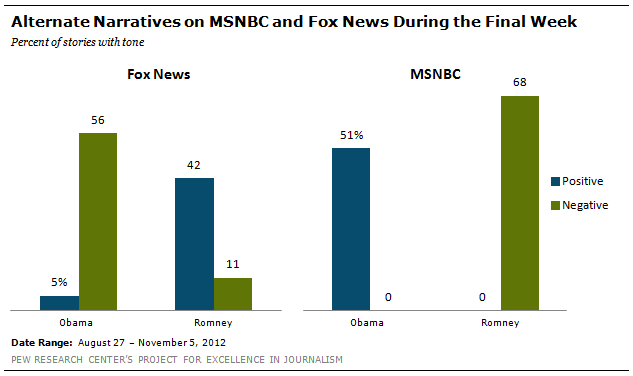 Ironically, MSNBC is everything that progressives imagine Fox to be. As the charts above demonstrate, it is little more than a conduit for progressive opinion aimed at bolstering the Democratic Party.