Global warming’s reputation as the most evil and dangerous thing ever to happen in the history of the world has just gone full Godwin: apparently – among all its myriad other crimes – it may have been responsible for the rise of Adolf Hitler, the spread of fascism across Europe and, by extension, the death of six million Jews.

This novel theory, first reported on in an American newspaper in 1941, has just resurfaced in the wake of claims by John Kerry and others that climate change was responsible for creating ISIS. Researchers were naturally keen to discover whether there was any precedent for such “global warming” related idiocy. And indeed it turns out that there was. 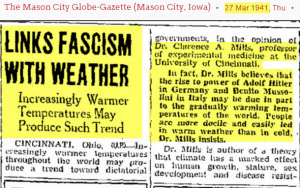 Little is known about what became of Dr Clarence A Mills, professor of experimental medicine at the University of Cincinnati, and his amazing theory that “gradually warming temperatures of the world” helped bring Hitler and Mussolini to power because “people are more docile and easily led in warm weather than in cold.”

But Dr Mills would surely be proud to know that his legacy lives on among such great 21st century thinkers as ex-jailbait-choral-nymphet Charlotte Church, the Prince of Wales, John Kerry, Thomas Friedman and the fifth most obnoxious Social Justice Warrior on Twitter, Graham Linehan.