If you are looking for yet more proof of just how far CNN’s ethical and professional standards have fallen, for no reason other than my declining an invitation to profile Muslims, regular CNN contributor Dean Obeidallah lashed out at me on Twitter. Twice I was told “go fuck yourself,” once I was compared to a Nazi: 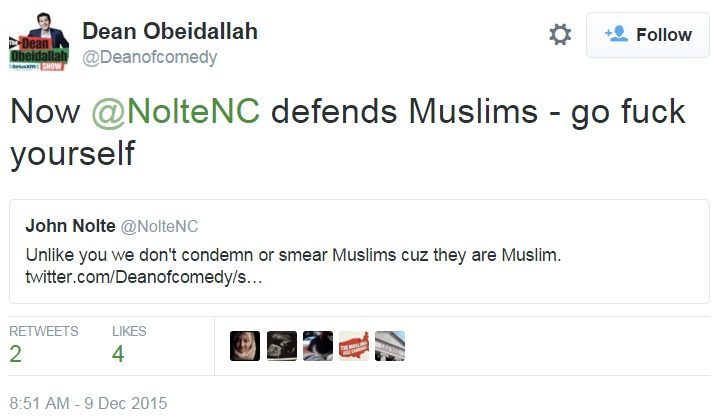 This all began Wednesday morning when Obeidallah, a Muslim himself (who is also a columnist for the left-wing Daily Beast), asked, “[W]hy wont Brietbart look at Trump’s Muslim partners -do u not care if they funded Hamas?!”

I responded truthfully that “[W]e don’t condemn or smear Muslims cuz they are Muslim.”

This resulted in the “go fuck yourself” tweets above.

I’m pretty loose on Twitter, but I don’t tell people to go fuck themselves.

Obeidallah’s concern about Hamas funding is especially risible given the CNN contributor’s own public support for Hamas-linked groups.

Moreover, what makes the CNN contributor’s attack especially gratuitous is that Obeidallah follows me on Twitter, so he must know that I don’t support Trump in the Republican primary race, and he must know I don’t support Trump’s temporary ban on Muslim immigration. His attack wouldn’t be okay if the opposite were true, but it just goes to show you how irrational the hate is.

If the name Obeidallah sounds familiar, that’s because CNN does business with a racist who openly mocked Mitt Romney’s black grandchild.

Don’t confuse this piece with me being a daffodil. “Go fuck yourself” is nothing compared to the regular supply of threats and hate hurled my way through every imaginable social media outlet. My mom really does need to cancel her Google Alert. This story is important because it tells a bigger story about the fall of CNN. The left-wing cable news network has devolved into a garbage fire of hate, bigotry and lies.

Breitbart News did not bother to reach out to CNN for comment because, well … This Is CNN.