The Washington Post awed the news world Friday morning with a monster “exclusive” story promising to reveal “Obama’s secret struggle to punish Russia for Putin’s election assault.” Instead, what it delivers is a magnum “Rusher” opus.

For the uninitiated, “Rushers” are left-wing “Birthers” — i.e., partisans so devastated by an election loss that they have cooked up a conspiracy that, if proven, would force the winner out of office and undo all of his executive actions. Birthers believed that Barack Obama would be proven constitutionally ineligible to serve as president if they could prove he was born in Kenya. Rushers believe that Donald Trump will be impeached and prosecuted for treason because he is a secret operative for Russian President Vladimir Putin.

Whereas mainstream conservatism disavowed Birthers, the institutional left has embraced the Rusher conspiracy; top lawmakers and journalists remain true believers. The Rusher narrative has dominated the Washington Post‘s reporting since Trump’s upset victory over Hillary Clinton. Along with laughable fake stories — e.g., “Russian hackers penetrated U.S. electricity grid,” or Adam Entous, an author on Friday’s piece, interpreting a joke by Rep. Kevin McCarthy as a REAL SCOOP — the Post has advanced the story with breathless innuendo about Tump and his associates, printed allegations from sources that they have no means to confirm, and often caveated tantalizing headlines with reminders that there is no evidence of any crime (or that the current scandal is not illegal).

The new Post piece — with the triple byline of Greg Miller, Ellen Nakashima, and Entous, plus contributions from Karen DeYoung and Julie Tate — bears all the marks of the Rusher genre. It reaffirms that Russia did not alter any votes in the 2016 election (almost 100 paragraphs in!), misleads about the FBI’s investigation into potential collusion between the Trump campaign and Russia, and fixates the bureaucratic process behind the Obama White House’s public statements and sanctions. While casting several top Obama officials as heroic and aggressive (eliminating much doubt as to who the cited “officials” are), the report laments that the previous administration’s efforts against Russia were too little, too late.

Naturally, many purportedly objective reporters celebrated the article as important and “powerful”:

This is a pretty powerful piece of journalism. https://t.co/UNuF7djoh8

The primary takeaways from the article, based on progressive responses:

In the Rusher mind, the 8,000 words padding out these inconsequential revelations are evidence of the story’s consequence.

And, if you dare to slog through the whole thing, the paper throws in a slew of eyeroll-worthy outbursts revealing how many arguable conclusions these “objective” reporters have accepted as gospel.

The Rushers have finally wised up to the fact that “hacking the election” is a punchline now. Yet they can’t keep from using an even vaguer, emotionally charged phrase as a subtitle on the top illustration in the piece: 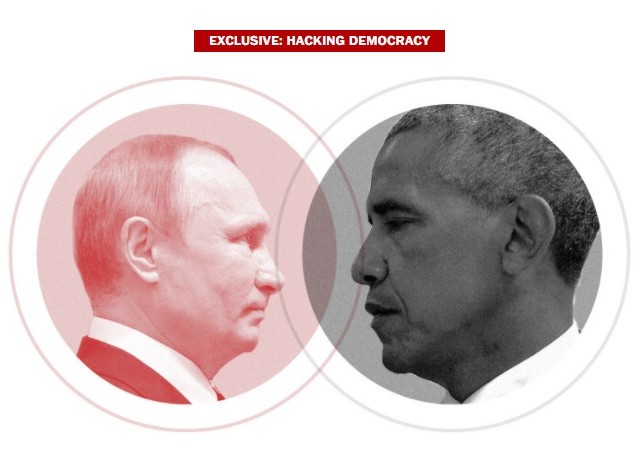 “CRIME OF THE CENTURY”

This is the phrase that Blue Check Mark Twitter has picked up widely — treating it as an established fact, as though putting a hot take inside a long-form news piece makes it not a hot take:

In political terms, Russia’s interference was the crime of the century, an unprecedented and largely successful destabilizing attack on American democracy. It was a case that took almost no time to solve, traced to the Kremlin through cyber-forensics and intelligence on Putin’s involvement. And yet, because of the divergent ways Obama and Trump have handled the matter, Moscow appears unlikely to face proportionate consequences.

DID THEY HACK THE VOTE? (THEY DIDN’T)

The piece oozes with innuendo that Russian hackers may have manipulated votes on Election Day.

The authors quote Michael Daniel, cybersecurity coordinator at the White House, saying that the administration feared scenarios “such as disrupting the voter rolls, deleting every 10th voter [from registries], or flipping two digits in everybody’s address.”

They then state that former DHS Secretary Jeh Johnson tried to “shore up the security of the nation’s archaic patchwork of voting systems” but was rebuffed by “some state officials… calling it a federal takeover.”

Later on, the piece reverses the meaning of its loaded language, citing the “patchwork nature” of U.S. voting systems as a defense against interference: “The patchwork nature of the United States’ 3,000 or so voting jurisdictions would make it hard for Russia to swing the outcome,” it declares, “but Moscow could still sow chaos.”

Ultimately, the reporters admit that not a single vote was altered — but that information is buried in the ninety-sixth paragraph: “Despite the dire warnings, there were no meltdowns in the United States’ voting infrastructure on Nov. 8, no evidence of hacking-related fraud, crashing of electronic ballots or ma­nipu­la­tion of vote counts.”

The possible sources for the story become quite obvious, as the authors give glowing depictions of key characters again and again.

The authors open the story with the claim that former CIA Director John Brennan first informed Obama that Putin personally ordered operations to hurt Clinton’s campaign and help Trump’s — and that Brennan went to great lengths (“an envelope with extraordinary handling restrictions”) to prevent leaks and demonstrate the severity of the situation. He later “moved swiftly” to meet with lawmakers about this grave threat and was the first White House official to give a “blunt” warning to Russia’s Federal Security Service (FSB) Director.

Former Secretary of State John Kerry gets several moments in the spotlight, too. This one sentence says it all: “Often perceived as reluctant to confront Russia, in part to preserve his attempts to negotiate a Syria peace deal, Kerry was at critical moments one of the leading hawks.”

And, worst of all, Former National Security Adviser Susan Rice comes across as a powerful heroine, cutting through the BS and pushing Obama toward the right decisions. One anonymous source quotes her as “cutting off” the objections of other administration officials: “We’re not talking anymore. We’re acting.” Rice, the Post writes in transparent awe, “moved swiftly” through proposals on the response to Russia.

Rice also pushed other Obama officials to be bold, the story says. “Rice challenged [Brennan, DNI James Clapper, Kerry, and Deputy FBI Director Andrew McCabe] to go to the ‘max of their comfort zones,'” we are told. Apparently, she was the one who convinced McCabe to go along with plans to seize two U.S.-based Russian compounds. “You guys have been begging to do this for years,” she reportedly told him. “Now is your chance.”

Unsurprisingly, the authors interviewed Rice’s deputy Ben Rhodes on the record for this piece. Also unsurprisingly: It completely omits the investigation into her “unmasking” of U.S. citizens in surveillance recordings — an act that Bloomberg columnist Eli Lake condemned as “what police states do.”

MUELLER SAVE US PLZ

The authors say President Trump “has denied any collusion” with Russia during the campaign — omitting the multiple Obama Cabinet members who have publicly stated or testified under oath that there is no evidence of collusion (or, for the sake of hair splitting, only conceding that the FBI probe is investigation potential “coordination,” not collusion). And, of course, in the same breath, the authors mention the unconfirmed claim (put out by anonymous sources through the Post) that President Trump is being investigated for obstruction of justice.

The good news is: Now that this massive long read is out of the way, it will only get harder for the Rushers to up the ante and keep even die-hard Resisters interested in the story.