Freshman Rep. Alexandria Ocasio-Cortez (D-NY) on Sunday criticized the New York Times for its coverage of former Trump White House communications director Hope Hicks, accusing the paper of framing her decision to comply with a congressional subpoena as a “Lifetime drama.”

Hicks was subpoenaed last week to turn over documents and testify before the House Judiciary Committee as part of the panel’s investigation into whether President Donald Trump and his associates obstructed justice and engaged in public corruption. In the article, titled “Hope Hicks Left the White House. Now She Must Decide Whether to Talk to Congress,” reporter Maggie Haberman described Hicks’s decision to comply with the request as “an existential question.”

Hicks, along with other members of the president’s circle, have until June 4 to submit all requested documents. The former Trump aide is expected to testify before House Judiciary Committee members on June 19. 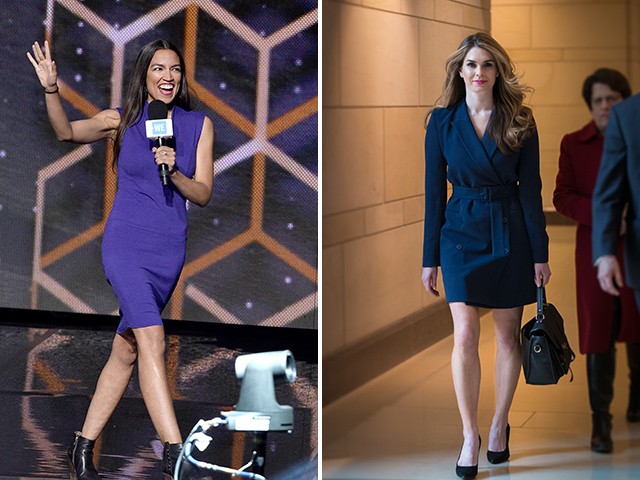 In the first of two tweets on the Times’ story, Ocasio-Cortez expressed frustration over Hicks’ portrayal, accusing her of potentially breaking the law. “What gets me is news breaks that this woman is weighing committing a crime before Congress &it’s getting framed by the NYT as some Lifetime drama called ‘Hope’s Choice,'” she wrote.

What gets me is news breaks that this woman is weighing committing a crime before Congress &it’s getting framed by the NYT as some Lifetime drama called “Hope’s Choice.”

This is a fmr admin official considering participating in a coverup led by the President.

“In the immediate aftermath of shootings, media routinely post menacing photos of people-of-color victims + dredge up any questionable thing they’d ever done,” the New York Democrat wrote in a follow-up tweet. “But when Hope Hicks considers not complying w a subpoena, it’s glamour shot time.”

In the immediate aftermath of shootings, media routinely post menacing photos of people-of-color victims + dredge up any questionable thing they’d ever done.

Several establishment media reporters concurred with Ocasio-Cortez’s criticism, tweeting their own views on the piece.

There is nothing for Hope Hicks to “decide.” She got a subpoena from Congress. Were she not white, wealthy, and connected, we wouldn’t be having this conversation. She would appear, or she would face the threat of prison like the rest of us. As she should. https://t.co/giDCcvIxvf

There are people out there justifying the police shootings of black folks because they didn’t comply with unlawful orders while Hope Hicks gets the glamour treatment for debating whether to comply with a congressional subpoena. https://t.co/v8NTBeq10C

Hicks’ subpoena comes as Democrats debate how to respond to Trump’s declaration that he will fight “all of the subpoenas” from Congress. More Democrats are calling for impeachment proceedings against President Donald Trump after he blocked McGahn from testifying last week.