Violence continued in Portland, Oregon, this weekend even after federal law enforcement pulled back to allow state and local police to take over. Yet the media, including the Wall Street Journal, described the Portland violence as “mostly peaceful.”

On Thursday night, the first night after the Department of Homeland Security struck a deal with the State of Oregon, the violent demonstrations continued, with protesters setting various fires, including one in which a pig’s head was set alight atop an American flag. On Friday night, the fires in the streets continue, with radical leftists burning Bibles on a U.S. flag.

On Saturday night, riots continued, with rioters targeting the Portland Police Department with some of the same weapons they had used against federal officers defending the Mark O. Hatfield U.S. Courthouse, including lasers aimed at officers:

Antifa are trashing a southeast Portland residential neighborhood in an effort to slow down Portland Police who are moving them away from the facility they were attacking with glass bottles. #PortlandRiots pic.twitter.com/wnhduflKJK

People in this unlawful assembly have thrown glass bottles at Portland Police and directed lasers at them. Anyone who does not disperse may be subject to force or arrest. 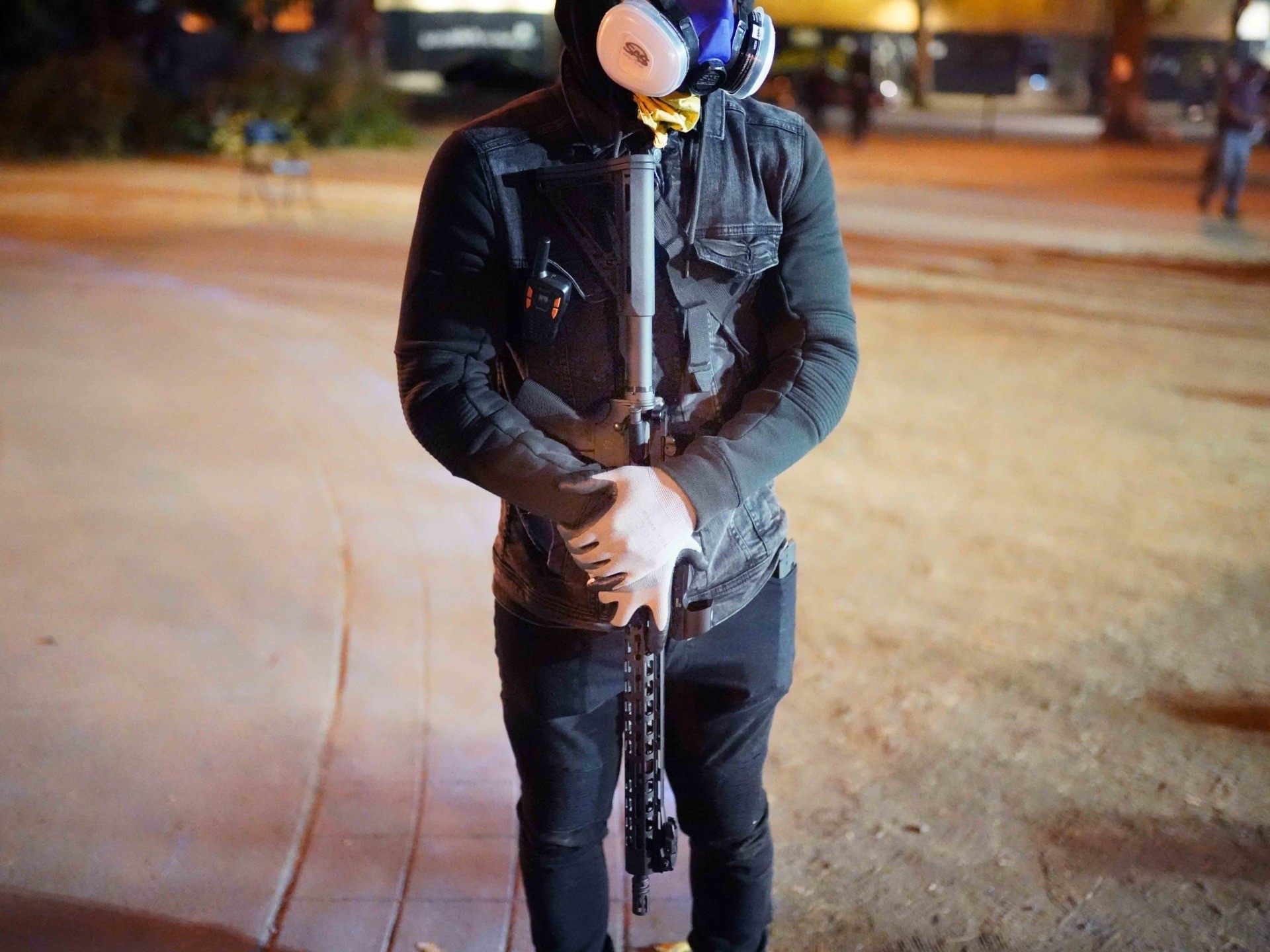 PORTLAND, OR – AUGUST 1: A protester poses with an AR-15 rifle during a protest against racial injustice and police violence on Aug. 1, 2020 in Portland, Oregon. Because you never know what the feds are gonna do, said the protester, who declined to be identified. (Photo by Nathan Howard/Getty Images)

Portland Police reported that one march on Saturday night was “peaceful.” Another, however, was quite violent. Notably, members of the demonstration disguised themselves as members of the media to carry out their attacks on police officers:

A person in the crowd threw a glass jar or bottle filled with paint, which struck a Portland Police officer in the head. The officer was not injured.

A large portion of the crowd marched blocking city streets and circled back toward the Penumbra Kelly Building. Portland Police met the crowd near Southeast 50th near East Burnside and directed it south all the way to Southeast Belmont Street. Again people with “press” written on their outer garments were among those throwing objects at police.

Even the nominally conservative Wall Street Journal played the game.

The Journal reported on Sunday afternoon: “With No Federal Agents on Streets, Portland Protests Turn Largely Peaceful.” Six paragraphs into the article, however, it noted:

Separately, a few hundred protesters descended on a police precinct on the city’s east side, according to local law enforcement, where they shined lasers at officers and threw glass bottles at them. The Portland Police Bureau said on Twitter that the gathering had been declared an unlawful assembly and that two people had been arrested.

In claiming that the protests had become more peaceful because of the absence of federal officers, the Journal cited “protesters” — the people with an interest in sending the message that federal officers were to blame for the violence.

The Journal has earned a conservative reputation due to the opinions on its editorial page. However, the news section is rather typically liberal, and over 280 Journal employees recently signed a letter complaining about the paper’s editorials.