Former Vice President Joe Biden on Tuesday once again joked about his habit of inappropriate physical contact in what is the latest gaffe to plague his 2020 presidential campaign.

Biden drew applause at a town hall event in Berlin, New Hampshire, after offering a chair to a woman who was sitting on the floor. While helping the woman up off the ground, she whispered something in the presidential candidate’s ear.

“We have a little secret going on here,” Biden told attendees as the exchange ended.

“I want the press to know — she pulled me close!” he then quipped, prompting laughter from the crowd.

After bringing a chair over to a woman so she could sit, she whispered something in his ear for some time. When the moment ended, Biden told the crowd “We have a little secret going here” before pointing out to the press that “she pulled me close,” not the other way around. pic.twitter.com/1RBSAwCfuC

Biden’s comment was an apparent reference to the controversy regarding his history of uninvited intimate touching. This particular gaffe comes after he cozied up to a 10-year-old girl last week.

“I’ll bet you’re as bright as you are good-looking,” he told a young girl after she asked him a question during a town hall in Houston, Texas. 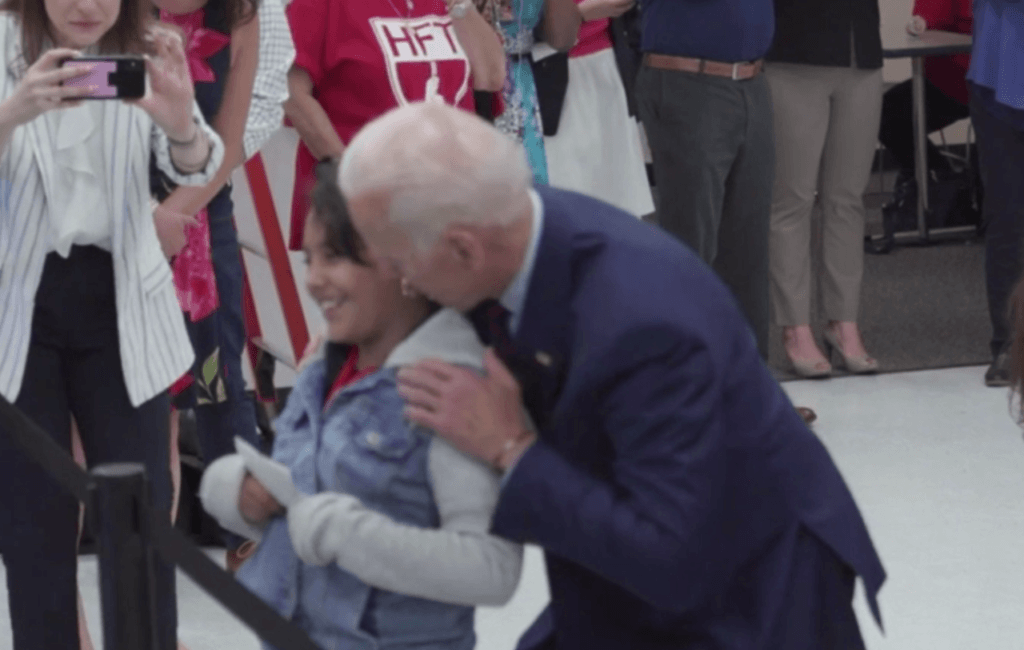 Joe Biden introduces a 10-year-old girl to the press

Ahead of launching a bid for the presidency, Biden released a video message in which he pledged to be more mindful of his interactions with both women and children. “The boundaries of protecting personal space have been reset. I get it. I get it. I hear what they’re saying and I understand it,” he stated. “I’ll be much more mindful. That’s my responsibility and I’ll meet it.”

However, some of his accusers aren’t sold that Biden is serious about changing his ways.

Lucy Flores, the former Nevada Democrat lawmaker who accused Biden of smelling her hair and kissing her the back of her head, has criticized him for his handling of the controversy.

“It’s clear @JoeBiden hasn’t reflected at all on how his inappropriate and unsolicited touching made women feel uncomfortable. To make light of something as serious as consent degrades the conversation women everywhere are courageously trying to have,” Flores tweeted in April.