An editorial in the government-owned newspaper Ghanaian Times published Monday accused President Joe Biden and other Western leaders of “mak[ing] Africa their whipping boy” by banning African travelers from entering their countries in response to the discovery of the “Omicron” variant of Chinese coronavirus.

South African scientists first alerted the World Health Organization (W.H.O.) to the discovery of a new variant of Chinese coronavirus that appeared to have the potential to be highly contagious in late November. In response, several European nations imposed travel bans on South Africa and other southern African countries that remained in place even as the Netherlands and Belgium later admitted they had found Omicron cases within their borders before the first known case in South Africa.

Biden followed the European nations with his own travel ban, issued while on vacation in the luxurious Massachusetts getaway of Nantucket. The ban prevents travelers from South Africa, Botswana, Zimbabwe, Namibia, Lesotho, Eswatini, Mozambique, and Malawi from entering America.

Biden had called similar travel bans in the early days of the pandemic, particularly the one President Donald Trump implemented against travelers from China in early 2020, a product of “hysteria, xenophobia, and fear-mongering.”

The @WHO has identified a new COVID variant which is spreading through Southern Africa. As a precautionary measure until we have more information, I am ordering air travel restrictions from South Africa and seven other countries.

Regarding early 2020, the editorial stated, “those were the days the virus that caused COVID-19 [Chinese coronavirus], SARS-CoV-2, was being studied, travel bans were unquestionably acceptable.”

Today, the editorial asserted, the travel bans highlight an alleged tendency in the Western world to blame Africa for global problems rather than addressing them. The bans, it continued, cast doubt on vocal assertions from public health experts in America and Europe that coronavirus vaccine products are effective.

“The Ghanaian Times joins African leaders in condemning the travel bans and calls them a typical brush-off because the West and their cohorts always go for what favours them and do so against Africa,” the editorial read.

“Thank God COVID-19 did not originate in Africa otherwise the West would isolate the whole of the continent but come for its raw materials without which their economies would not run.”

“Were they not their own medical scientists who said vaccination had the efficacy to contain COVID-19 and all its variants?” the editorial asked. “Why do the West and their cohorts make Africa their whipping boy in almost all bad situations that affect the world?”

“The West and their cohorts should rather check their ineffective handling of the pandemic underpinned by misplaced claims of human rights that has resulted in more cases and deaths than in Africa,” it concluded.

The Ghanaian Times writers also noted that African doctors with experience treating Omicron patients have repeatedly stated that, in their experience, the Omicron variant appears to cause less severe disease.

“Their symptoms were so different and so mild from those I had treated before,” Dr. Angelique Coetzee, chair of the South African Medical Association, said last month, describing them as extreme fatigue and fever.

“Although it’s too early to make any definitive statements about it, thus far it does not look like there’s a great degree of severity to it,” American medical celebrity Anthony Fauci asserted about the Omicron variant this week.

The Ghanaian Times editorial echoed the position of the government of Ghana. President Akufo-Addo similarly condemned the Biden-style travel bans following welcoming Ramaphosa to the west African country on Sunday, asserting that Omicron “was recently sequenced and reported by South African scientists, was discovered much earlier in the Netherlands.” At press time, no countries have imposed similar travel restrictions on the Netherlands.

Akufo-Addo condemned the Biden bans as “instruments of immigration control” using the pandemic to obscure their true objective.

Ramaphosa used the opportunity of their joint press conference to reiterate his opposition to the travel bans, which he called “a slap in the face” given that South African scientists and doctors first identified and treated the variant, though proof now exists that European countries experienced Omicron infections first and failed to spot them.

“It’s no longer just located in Southern Africa. I am saying that those countries must adhere to what was agreed to at the G20, where it was agreed that we must open travel so that our economies can return to normal,” Ramaphosa said. “What we should be doing is[to] utilise the tools that we got to mitigate the virus. As people travel around the world, they mu.”,” he said. 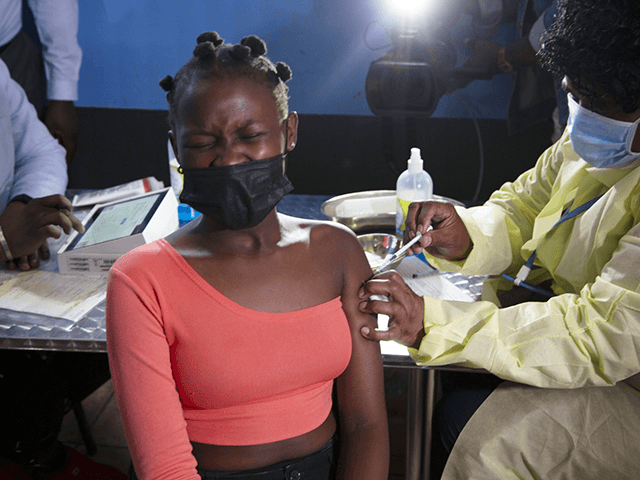 A young woman reacts as she receives a Pfizer jab against COVID-19, in Diepsloot Township near Johannesburg Thursday, Oct. 21, 2021. A new COVID-19 variant has been detected in South Africa that scientists say is a concern. (AP Photo/Denis Farrell, File)

“The imposition of travel bans on South Africa and a number of countries in the southern African region are regrettable, unfair and unscientific,” Ramaphosa said last week.

Ramaphosa has received enthusiastic support from the United Nations, which has – both directly and through the World Health Organization, a U.N. agency – opposed travel bans generally as a way to contain the Chinese coronavirus since the pandemic began. Last week, U.N. Secretary-General António Guterres referred to the bans as “travel apartheid.”

The director-general of the World Health Organization (W.H.O.), Tedros Adhanom Ghebreyesus, said last week that the Biden-style bans meant that South African scientists were “being penalized by others for doing the right thing.”