Australia’s Prime Minister Scott Morrison on Friday urged both the World Health Organization (WHO) and the U.N. to move against Asia’s live animal wet markets, arguing they pose “great risks” to global health and wellbeing.

Speaking during a radio interview with local outlet 2GB, the conservative coalition leader said more needs to be done to limit the risk posed by these markets.

He hopes to have more success than the UK which tried and failed last year to ban the sale of cat meat and dog meat in Asia, after the British government’s own Ministry of Justice blocked the move as “culturally insensitive.”

“Wet markets, I think, is a very real and significant problem wherever they exist. I mean, this virus started in China and went round the world. And that’s how it started. We all know that,” Morrison said.

He declared wet markets “can be a real problem” given the slaughtering practices, adding that from a global perspective, “this is something the World Health Organisation should do something about.”

“We’ve got to be quite strident on these things in these forums and making sure that they’re dealing with what are quite serious health risks,” he said.

The COVID-19 virus is thought to have originated in one of these markets in Wuhan, China.

A number of animals, including bats, lizards, cats, dogs and the highly endangered pangolin, have been identified as possible culprits for the virus in markets that have drawn attention previously elsewhere in Asia. 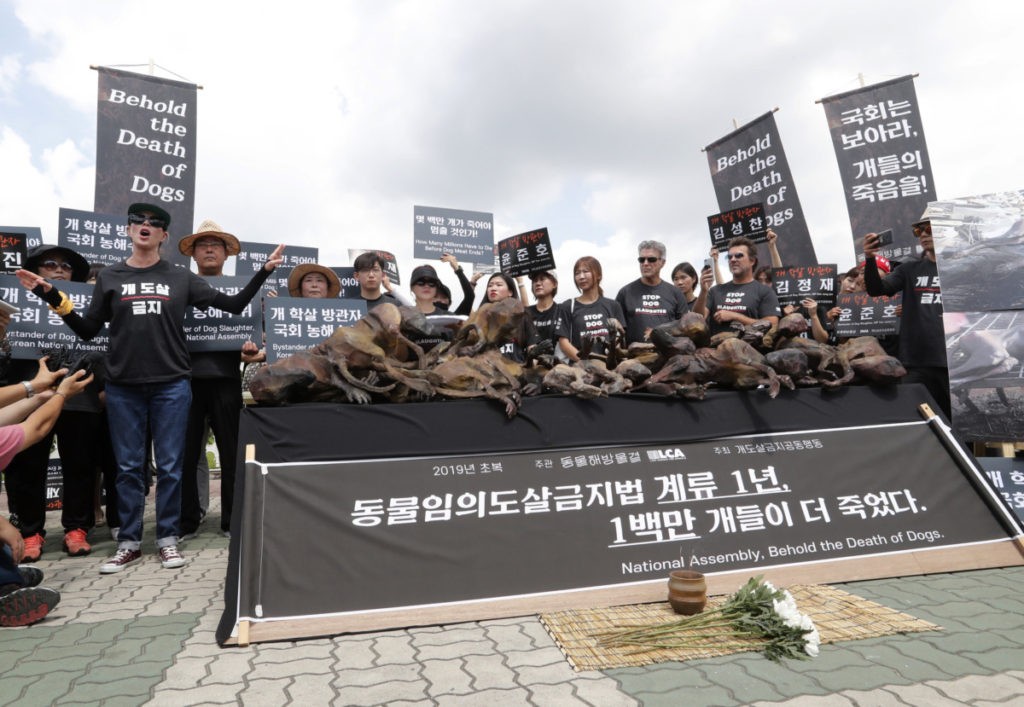 Members of the Last Chance for Animals with models of slaughtered dogs at a rally to oppose eating dog meat in front of the National Assembly in Seoul, South Korea. July 12 is the day South Koreans eat foods such as dog meat in the belief it would help them survive heat during summer. The signs read: “How many millions have to die before dog meat ends?” (AP Photo/Ahn Young-joon)

The Wuhan Huanan Seafood Wholesale Market was shut down in January as a result of the growing number of infections, as Breitbart News reported.

Morrison said he was not criticising or making any “cultural references” to the live animal trade, but said it is important these types of food supplies are handled properly as they can be “very dangerous.”

Morrison’s call follows a similar one made last year by the Humane Society International of Australia (HSIA), which said trade in dog meat as found in wet markets is a public health threat and “significant animal welfare issue.”

The HSIA pointed to a market in North Sulawesi, Indonesia, that tested positive for rabies last May as emblematic of the problems faced.

“The extreme cruelty of Indonesia’s dog and cat meat trades is intolerable under both Indonesia and international animal welfare standards, and the government is right to be concerned about the impacts of these trades on its international reputation,” said Lola Webber, head of the Dog Meat Free Indonesia Coalition.

“Customs evolve and the nationwide movement from within Indonesia calling for an end to these trades is proof that Indonesia is ready to banish the dog meat trade to the history books of shame and illegality. This latest announcement will be celebrated globally,” she added, according to a UPI report. 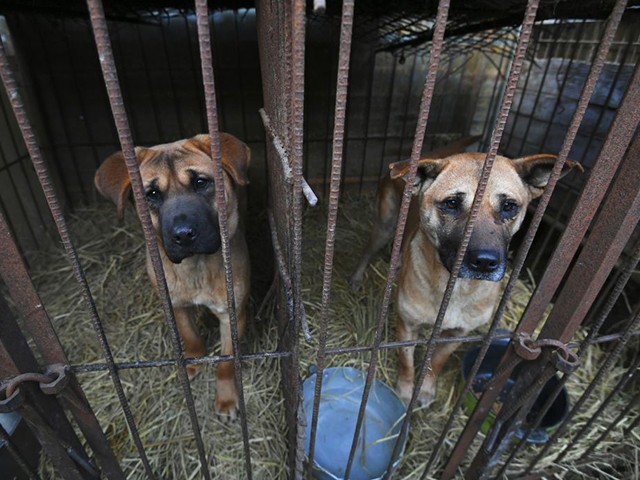 Dogs look out from a cage at a dog farm during a rescue event, involving the closure of a farm organised by the Humane Society International (HSI), in Hongseong on February 13, 2019. This South Korean farm is a combined dog meat and puppy mill business with almost 200 dogs and puppies on site ready to be sold for human consumption.  (JUNG YEON-JE/AFP/Getty Images)

Earlier this week it was announced that thousands of people had already started to flood back into wet markets across China.

A medicine seller at a market in Dongguan, southern China, was seen advertising bats, snakes, lizards and toads to assist with common ailments, the Daily Mail reported.

“The markets have gone back to operating in exactly the same way as they did before coronavirus,” a correspondent to visited the market told the publication.

“The only difference is that security guards try to stop anyone taking pictures, which would never have happened before.”

Another market in Guilin, in southwest China, was full of cats and dogs crammed into cages in filthy conditions and available for slaughter.

As Breitbart news reported, on Wednesday the Chinese city of Shenzhen officially claimed it was ready to end the practice of wet markets – but not just yet.

The new law will come into force on May 1.