China’s Global Times government newspaper alleged that Florida may be the true origin location of the Chinese coronavirus on Wednesday, just 24 hours after publishing a claim that the virus leaked from a laboratory in North Carolina.

The Chinese Communist Party has repeatedly asserted that the Chinese coronavirus – which originated in central Wuhan, China, in late 2019 – is actually American in origin. For the past year, the Chinese Foreign Ministry has accused Fort Detrick, a U.S. Army facility in Maryland, of leaking the virus and infecting Americans before the virus surfaced in Wuhan. The evidence, the Foreign Ministry claims, is that Maryland documented some cases of e-cigarette, or vaping, lung injuries in 2019, which Beijing alleges were secret coronavirus cases.

A leaked Chinese government document revealed last year that the regime documented its first case of human infection with Chinese coronavirus in Wuhan on November 17, 2019. Studies have suggested human infections may have begun to spread in Hubei province, where Wuhan serves as the regional capital, as early as October 2019. The Chinese government did not notify the World Health Organization (W.H.O.) of an outbreak of novel disease until late December 2019 and claimed it was not contagious at the time.

The Communist Party began rejecting allegations that the virus originated in Wuhan last year and has since escalated accusations that the United States is attempting to use an investigation into the origins of the virus for political gain. On Tuesday, an anonymous “source close to the matter” told the Global Times that Washington is planning a “political war” over evidence linking Wuhan to the pandemic.

The Global Times disregarded the abundance of evidence pointing to Wuhan as the origin location of the virus on Wednesday, instead focusing on Florida’s alleged “lack of transparency about its early cases” to claim that “a cloud of doubt has been cast” over the state’s pandemic data.

“People in Florida complained about the concealment of information on these cases, which are now widely believed to have emerged earlier than the state’s officially reported patients,” the Times claimed, “and even earlier than the virus outbreak in Wuhan, Central China’s Hubei Province.”

The propaganda newspaper did not elaborate on what it meant by “widely believed.” The “experts” cited to substantiate the argument in the article were Chinese alleged scholars the newspaper regularly resorts to for comments that favor its claims. Both foreign media and foreign governments have accused Chinese state media of fabricating non-existent “experts” to make claims favorable to the Chinese government.

“The early cases in Florida might have appeared prior to the ones in Wuhan, but the US didn’t recognize them as COVID-19 [Chinese coronavirus] infections at that time, or deliberately ‘ignored’ them,” Wuhan University virologist Yang Zhanqiu told the newspaper. Yang accused Washington of trying to “politicize and smear China.”

Yang linked the alleged vaping injuries to coronavirus, claiming that, “due to the similarity of symptoms between EVALI and COVID-19 patients and since no nucleic acid testing kits were available then, it’s highly likely that some COVID-19 patients were actually misdiagnosed as EVALI patients in 2019.” EVALI is an acronym for “e-cigarette or vaping use-associated lung injury.” Yang did not address the lack of evidence that any individual has been diagnosed with such a lung injury after being in close proximity to someone else diagnosed with it, meaning it is not contagious, despite the lack of infectious disease protections used when patients are diagnosed with an injury. 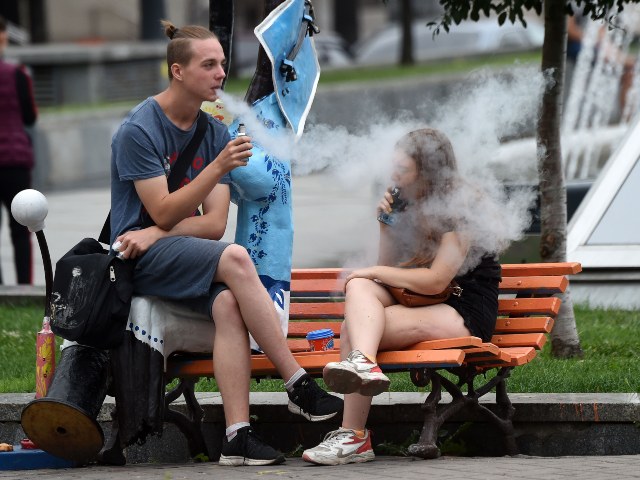 In this file photo, a couple smokes electronic cigarettes (e-cigarettes) in central Kiev on a warm autumn day on September 13, 2019. (Photo by Sergei Supinsky/AFP via Getty Images)

The latest Global Times accusation contradicts the government newspaper’s own reporting from 24 hours prior. On Tuesday, the newspaper claimed that the likeliest true origin of the Chinese coronavirus was a laboratory in the University of North Carolina (UNC) – Chapel Hill led by top coronavirus researcher Ralph Baric. Among the evidence for such a claim was, again, the false allegation that North Carolina experienced more EVALI cases than other parts of the country (in reality, the highest number of cases occurred in Texas and Illinois). The Global Times also claimed that the laboratory had a record of “basic errors and incorrect remedial measures,” citing as an example a case of a researcher accidentally dropping a mouse onto the floor in 2015.

The Global Times omitted the fact that Baric had previously collaborated with Shi Zhengli, a researcher at the Wuhan Institute of Virology (WIV) considered China’s preeminent coronavirus expert.

In June, the Global Times called Fort Detrick the “#1 suspect” of the origin of the Chinese coronavirus after a year of Chinese Foreign Ministry spokesman Zhao Lijian accusing the laboratory and demanding Chinese experts receive access to it. Neither its claims to Florida or North Carolina producing the virus featured any comparison of the theories or explanation for the abrupt shift away from blaming the Maryland U.S. Army facility.